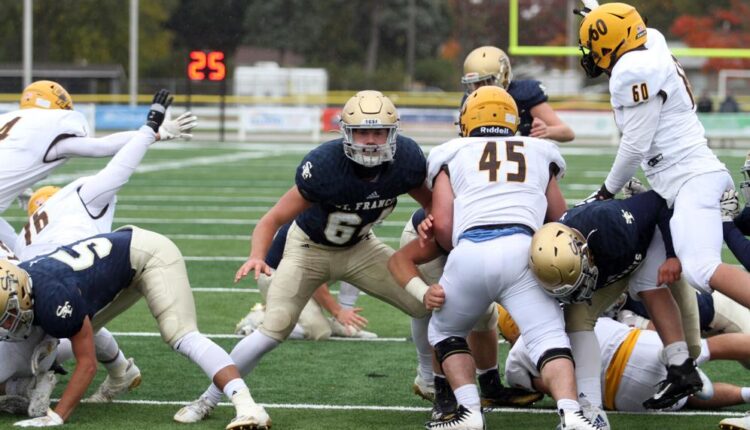 TRAVERSE CITY – Casey Donahue wasn’t sure Duke University would ever return to him.

The Traverse City St. Francis footballer has written to coaches during a rampage he sent out last summer to increase the heat of his recruitment hunt.

He had contacted numerous trainers, received offers from Central Michigan and Lawrence Tech, and spoken to Michigan Tech, Saginaw Valley, and others.

Then it came around Christmas time.

“I just thought you know, maybe they didn’t see it, maybe they aren’t looking for anyone,” said Donahue, a senior long snapper who didn’t just start on the offensive and linebacker. “And then one day he showed up.”

Donahue signed his national letter of intent on Wednesday to play for the Blue Devils as part of a large contingent of classmates who signed up at St. Francis High School.

Before the Blue Devils could offer him a place on the team, he had to be accepted into the prestigious Division 1 school of approximately 16,000 students in North Carolina. Donahue’s weighted grade point average of 4.15 earned him admission in February, making him the first St. Francis student to ever attend Duke, a member of the Atlantic Coast Conference.

Rubio Long Snapping, a series of camps where snappers can hone their skills and demonstrate their skills, was rated by Donahue as the No. 41 recruit nationwide.

“My goal was to play college football,” said Donahue. “I just tried to play wherever I could. I wanted to play a position (defense) too, but when Duke calls it’s hard to miss an offer from a Division 1 Power Five school.”

The gladiators won two one-point games, in which a successful point after trying Donahue’s snapshots against kicker Brice Kempf proved the difference. The Glads defeated Jackson Lumen Christi 21:20 in the regular season final and Cass City 13:12 in the semifinals to book a trip to Ford Field, Detroit for the Division 7 state championship game.

“It’s something that can make or break a season,” said St. Francis head coach Josh Sellers. “We saw that at Lumen Christi. We did our PATs and stopped them.”

At the signing ceremony of St. Francis on Wednesday, 10 high-ranking student-athletes advanced to the next level.

Tennis players Charlie Schmude and Alexi Lewis are both committed to hope.

“It’s a unique day here,” said St. Francis Sporting Director Aaron Biggar at the signing ceremony. “We have a lot of people going to Hope. I’m expecting a check for a finder’s fee.”

“Together we have a good group of people from our school in this class,” said Donahue. “I’ve played soccer with a lot of these guys. They don’t all play soccer (in college) but I know that the work ethic that all of these guys have will just carry on with the sport they do at the next level.”

As with many specialists, the recruiting process has been to try more camps and competitions than just a play band.

Donahue started working at junior college in his sophomore year and then decided to take it one step further and go to a camp before starting his junior campaign. He followed the nationally recognized snapper Dylan McCardel in St. Francis and sought McCardel’s advice on techniques.

“I got a decent rating for going to my first camp,” said Donahue.

“There isn’t much room for error as this is a core part of the game for PATs and punts,” said Donahue. “For me personally, I want to bring more athleticism into long snapping because I started offensive and defensive at university so I could be a more athletic long snapper than I see it most often.”

The Devils also have just two Michigan players on their roster under head coach David Cutcliffe, who has led the team since 2008. Duke has not announced any more Long Snapper in its 2021 recruiting class.