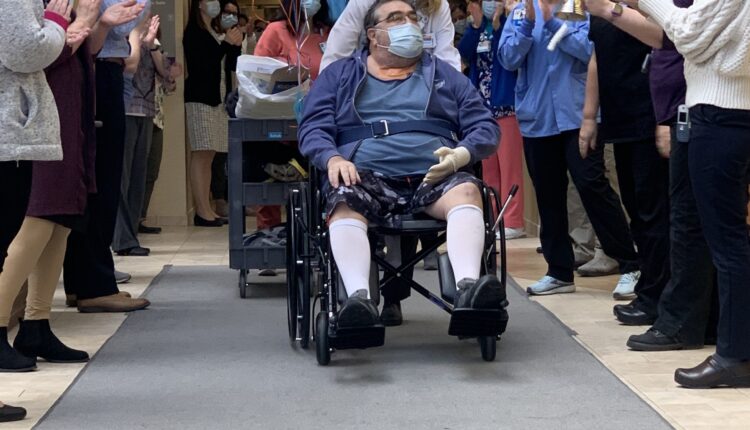 Sault Ste. Marie Man Returns Home After 102 Days in the Hospital Due to COVID-19

A Sault Ste. Marie Mann is going home today after spending months in hospital for COVID-19.

“He had to work very hard mentally, emotionally and physically, and he really did it,” says Dr. Elizabeth Spaulding, Inpatient Rehabilitation Doctor at Mary Free Bed & Munson in Traverse City.

Dale Wilson tested positive for COVID-19 on November 19, 2020. Four days later, Wilson developed COVID-19 pneumonia and respiratory failure. The hospital then put him on a ventilator.

Wilson’s wife Janis says, “They called me later that evening and said he needed to be intubated and I’m like what because he went from our house to the ambulance.”

It would be 25 days before his Janis could speak to their husband again.

“The scariest part was the phone call I got that you might have to make a decision here, you know a life changing decision, and I thought, what are you talking about … he didn’t do it well,” says Janis.

Wilson’s journey to recovery had only just begun. He was transferred to a qualified care facility in southern Michigan. Then in February to Mary Free Bed in Munson, Traverse City.

Dr. Spaulding says: “When he came for the first time, he was scared, he was very scared. He had been through a lot and it’s really hard for patients when they have been through so much and there is nothing they can do for themselves, they don’t realize how far they have come. “

On Friday, his doctors, nurses and staff said goodbye from the bottom of their hearts.

Dr. Spaulding says: “That’s why we really do what we do. I think everyone tore themselves going through it and it just means so much to us. “

Now Wilson hopes other people won’t have to endure what he’s been through.

“Get the vaccination because if you don’t, I wish I could have got it, but I didn’t,” Wilson says.

Road closures for the construction of Broadway bridges