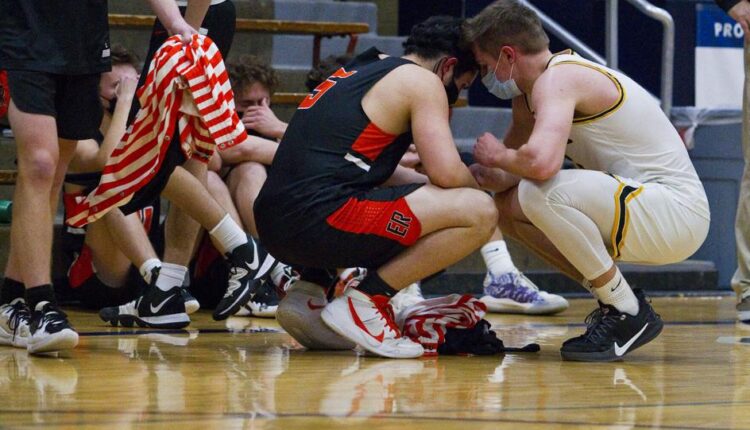 TRAVERSE CITY – Handshakes aren’t happening this season due to COVID-19 concerns, but after this game it just felt right.

Glen Lake defeated Elk Rapids in a 62-52 dogfight in the Division 3 semifinals at St. Francis High School in Traverse City on Thursday.

The Glads won the final meeting, a 59-44 district final, but lost to Iron Mountain in the regional final. The two teams had planned a game in the 2020 playoffs, but it was canceled due to COVID-19 reasons.

Elk Rapids hit six three pointers in a first quarter in which the lead changed hands four times. The Elche led at six to half after a draw at 19 and 20 through the Lakers. Mason Travis had three of the elk’s six shots from depth and the two teams together for seven.

Glen Lake scraped half out of the deficit after a slight defensive optimization. Finn Hogan began protecting Travis from above, taking away the Elks 3-point game. The Lakers took the lead 12: 4 and the Elks never came closer than three points.

“I have to give it to Todd Hazelton,” said Flaska. “He came up to me and said, ‘Coach, please put Finn on Travis.’ So we took him to Travis and restricted him, and then we just started taking advantage of the inside. “

Hazelton’s proposal was very effective. Elk Rapids didn’t make a 3-pointer in the second half.

“We were just more patient on the offensive and tried to bring it into the house,” said senior Justin Bonzelet, who kicked off the game. “Luke (Hazelton) and Finn have been very solid for us all season. They were our most important points, and we kind of got our backs on them, and they took care of business. “

The Lakers scored 13 of their 15 points in the third quarter within the suit and didn’t make any from outside the arc.

Hogan led the way with 24 points for Glen Lake, Luke Hazelton had 18 and Jackson Ciolek had 11.

Travis led Elk Rapids (14-4) at 20. Preston Ball was limited to just one 3-pointer in the first quarter and scored the remainder of his 16 points in the second half. When he met, however, it was too late.

“We did some things this year that we hadn’t done in a long time,” said Elk Rapids coach Kevin Ball. “I think we had a really good season. Children played their hearts out every night. We’re just grateful that we got to play the whole season and I’m definitely very happy that we’re 14-4 and our seniors had a big part of it. “

Glads’ press has pity on Ironmen

When Traverse City St. Francis coach Sean Finnegan found out ahead of the game that Mancelona starters Justin and Adam Ackler weren’t going to play Thursday night, he knew the Ironmen were likely to lose a lot of energy.

St. Francis won 72-37 in a game that had a clock running in the second half.

The Ackler twins didn’t play for Mancelona on Thursday because they had concerns about the spread of COVID-19.

The Gladiators took the half-way 39:21 and played with a press to kick off the third quarter. It was too much for the ironmen. St. Francis scored 24 unanswered points as Wyatt Nausadis completed a game high of 32 points with four 3-pointers. The hosting gladiators took the lead by 40 points and set a running clock.

“At half time we talked about not having enough energy and not putting enough pressure on them,” said Nausadis. “We came out in the second half and just swarmed around them.”

Mancelona’s trainer Brian Sheridan said the plan is to keep Nausadis out of the paint and get him to try controversial 3-pointers.

St. Francis trainer Sean Finnegan said he knew Thursday’s gladiators would be successful if they did the things they should be doing.

“If our defense had the energy we should have for 32 minutes, I would feel good with our result,” said Finnegan.

“It’s been a great year,” said Sheridan. “I told the guys at the beginning of the year I don’t care if we win a game as long as we can play. We did something historic: We won our first championship title.

“Jayden ended his career on a really high grade, scoring over 1,000 points, almost several hundred rebounds. He’s a great player and has done a lot for our program. I don’t have to be ashamed of anything. “

TCSF lost both games to Elk Rapids but Finnegan said the Glads have improved defensively since then.

“We’ll see if we can put together a slightly better defense on Saturday and put ourselves in a better position whoever we play,” said Finnegan after beating Mancelona.

St. Francis and Glen Lake will give a tip for the district finals on Saturday at 2 p.m.