This weekend looks like a weekend in early December in terms of the weather. In a storm system, the air should be cold enough to collect some snow almost anywhere in Michigan.

First, it’s not a major blizzard for 90 percent of Michigan. It is classified as heavy snow on most snowbelts. But even in the extreme southeast, where the warmth usually ward off early-season snow, there could be a couple of inches of snow.

From Sunday to Sunday at night I expect that the precipitation could be wet snow.

On Saturday there are rain and snow blows and a lot of time in dry weather.

Here is the radar forecast for this weekend. It first shows the snow and rain blows in the lake effect areas on Saturday. The forecast then shows the extensive area of ​​rainfall moving across Michigan on Sunday.

The dilemma is how much snow melts when it hits warmer ground. The upper temperatures also say it will snow, but the models predict rain most of the time. So either one is wrong, and that is what happens with weather modeling and forecasting. With the low pressure center trail south of Michigan, we should be on the cold side and have mostly snow. I would say Sunday afternoon could mix with rain or turn into rain. At sunset on Sunday evening, the precipitation should turn into snow again, especially since we are on the cold northwest side of the storm.

I think most of us wake up early Sunday morning when snow falls. In the areas of Grand Rapids, Muskegon, Holland and South Haven, it can even snow moderately. Around noon the snow mixes with rain and occasionally changes to rain. At 6 p.m. most of the precipitation will be snow again.

How much snow is expected this weekend?

The snow on Saturday will be a lake effect and will only accumulate west of US 131. Here is the Saturday snow. 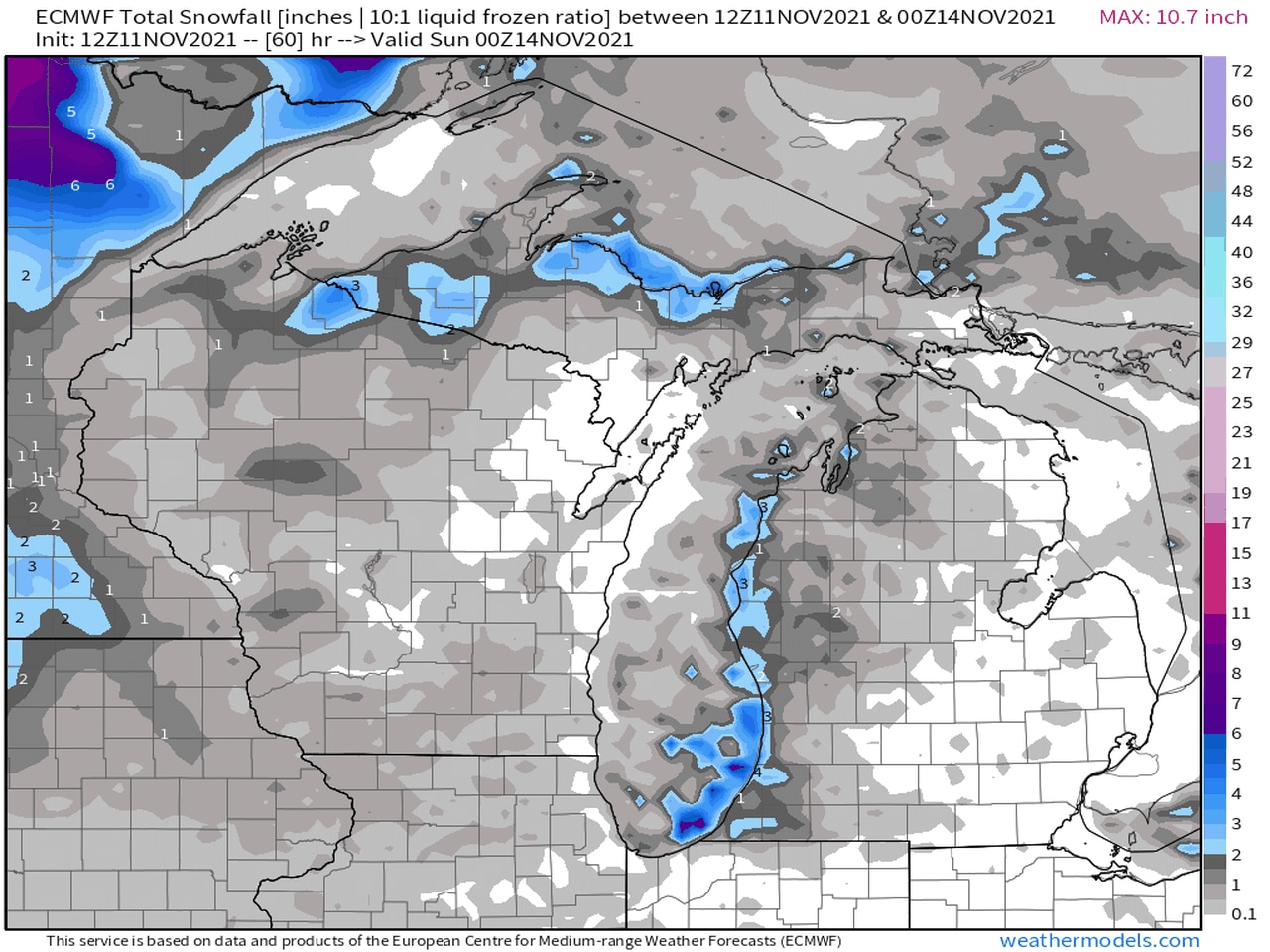 Saturday could have an inch or two of snow all the way from Petoskey through Traverse City and south along the Lake Michigan coastal counties. Remember that right on the shore it will stay warm and it will rain, but from 10 miles inland to 30 miles inland there will be snow.

Sunday is a different story. With each run through the models, the surface weather forecast tends to better match what the cold air at altitude should deliver. In other words, snow is becoming more and more likely. See the European model snow forecast below. 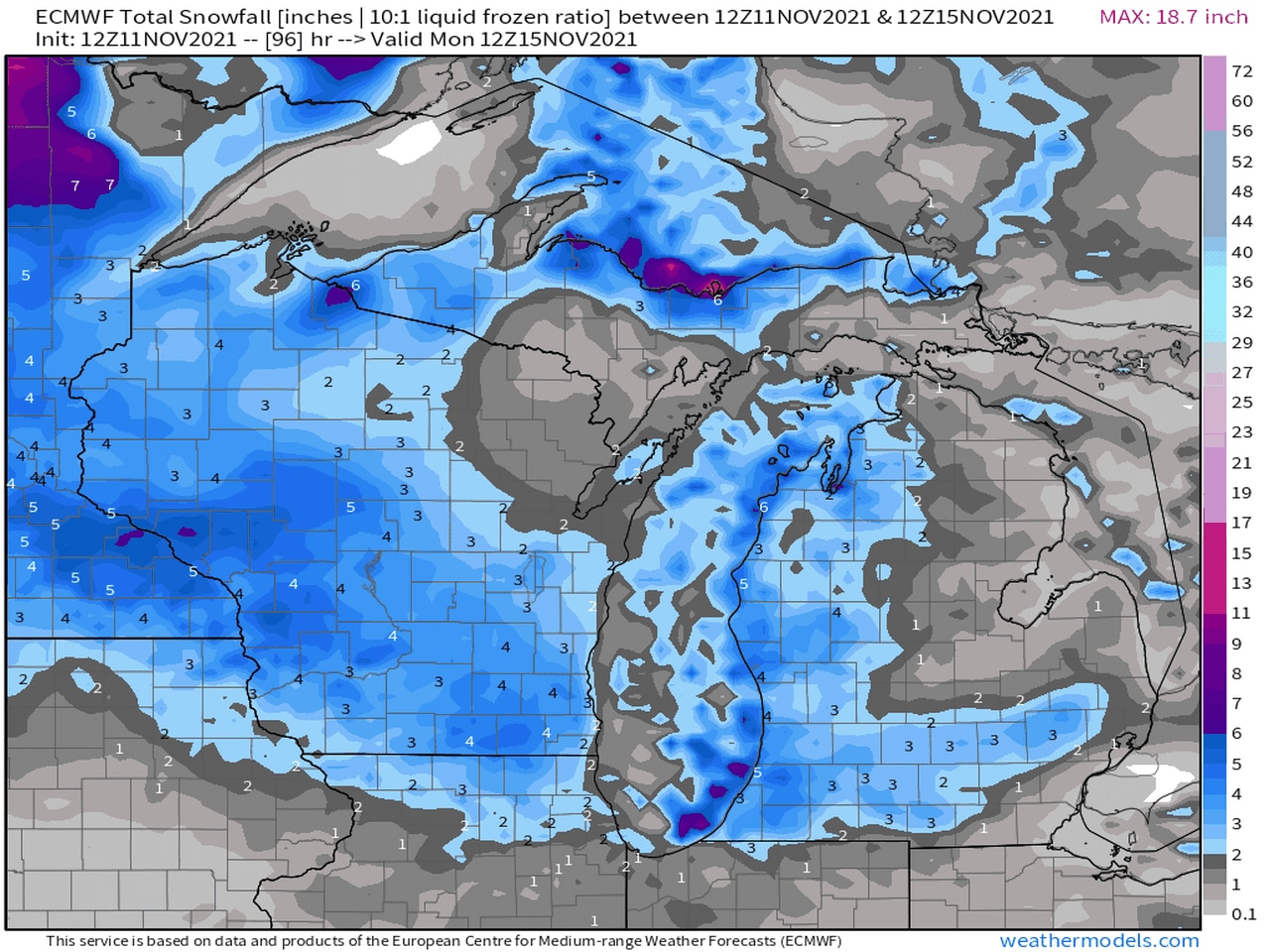 Now the model predicts two or three inches of snow in most of southern Lower Michigan. That seems to fit what a storm like this one usually brings to Lower Michigan. Also, remember that the amount of accumulation can be short-lived as temperatures rise well into the 1930s.

With the temperatures, Saturday morning will be cold enough to support snow. The afternoon should be warm enough to melt away any buildup. 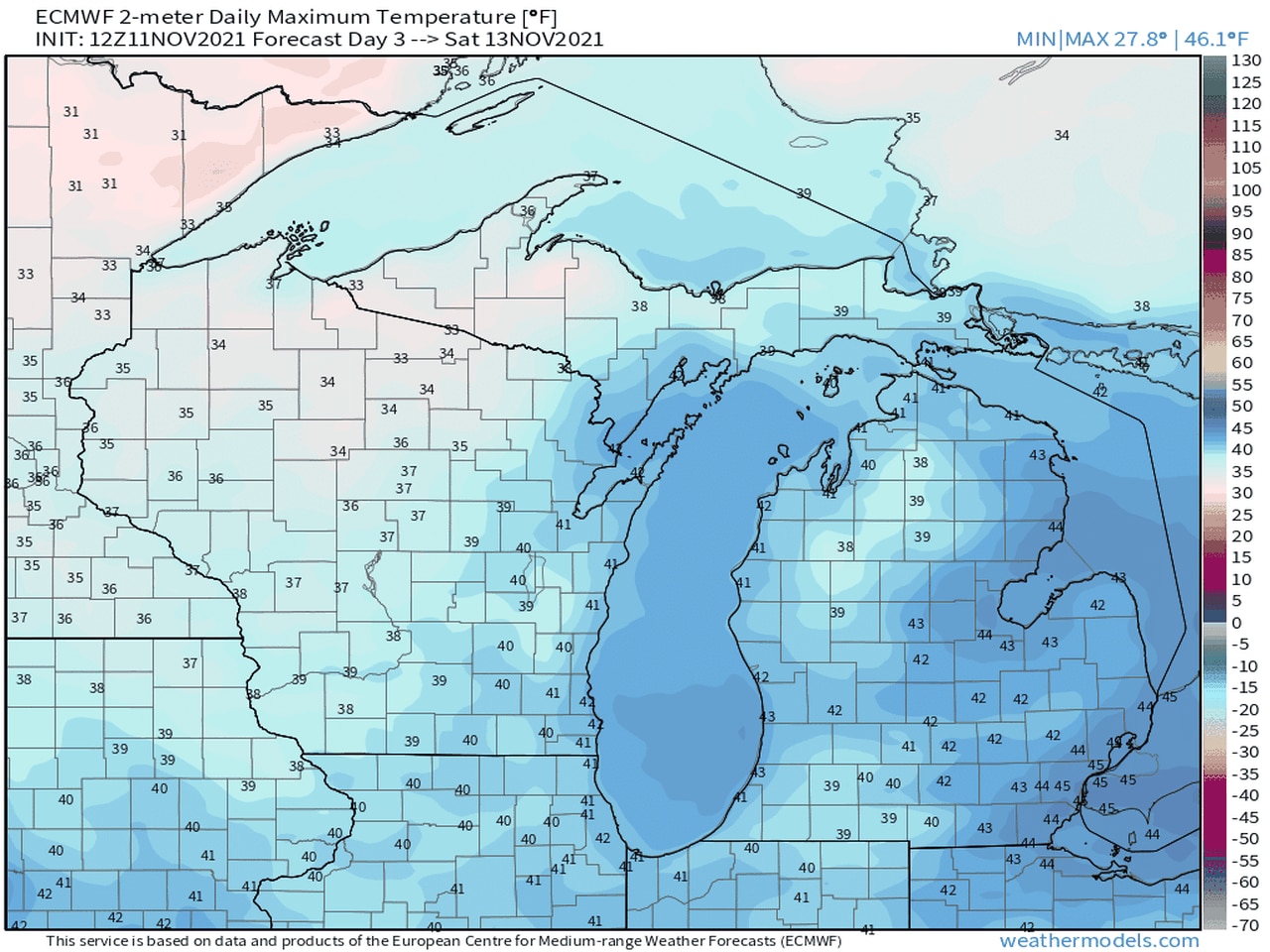 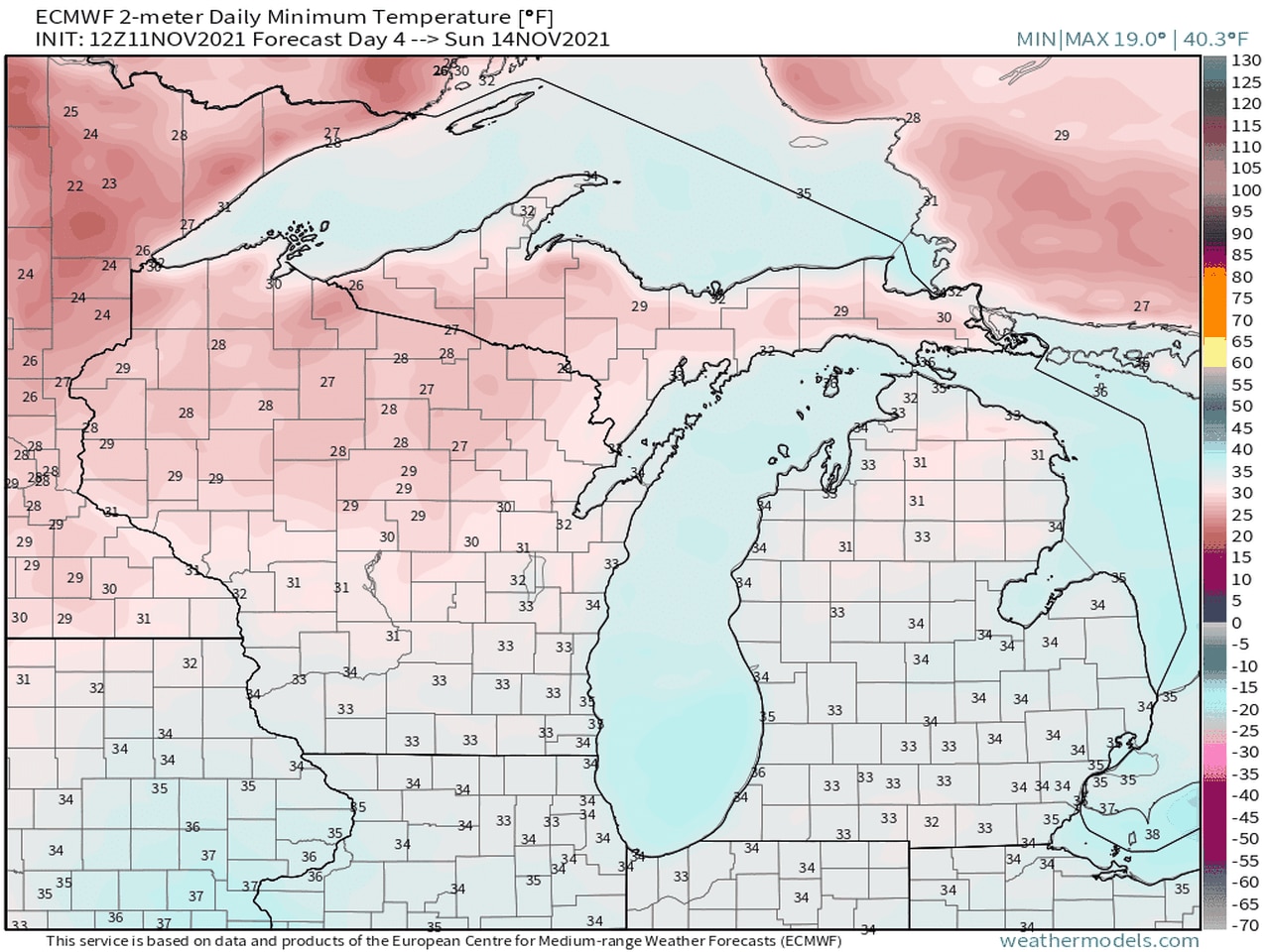 In the afternoon the temperatures only heat up to about 36 degrees. There can be enough heat to turn snow into rain. 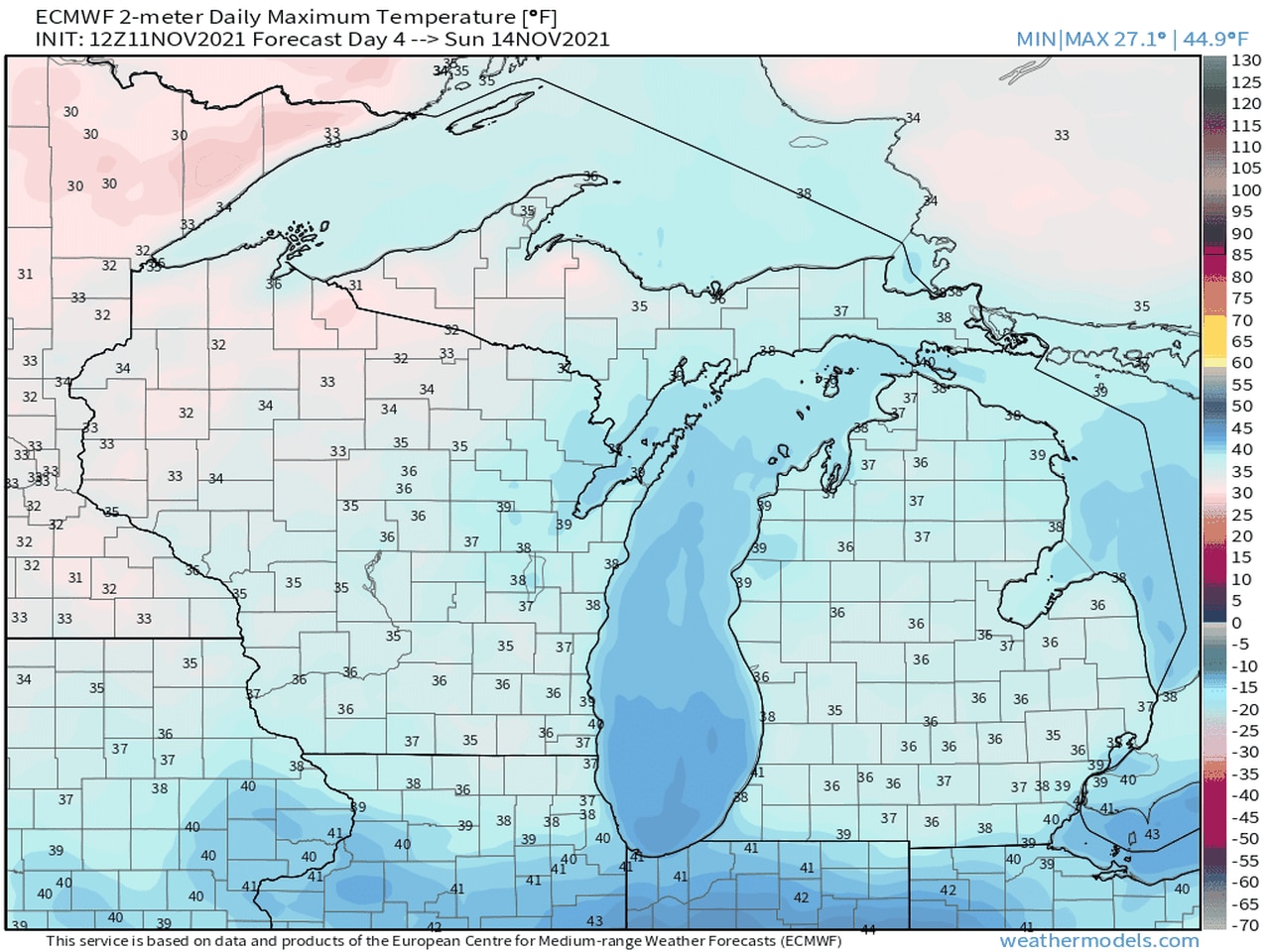 I think you get the hint. This weekend will feel and look like winter, with colder temperatures and snow congestion. Of course I’ll give you updates when we go into the weekend.

KHN’s ‘What the Health?’: Why Health Care Is So Expensive, Chapter $22K

Creativity Centered: Gift giving can be an art | News