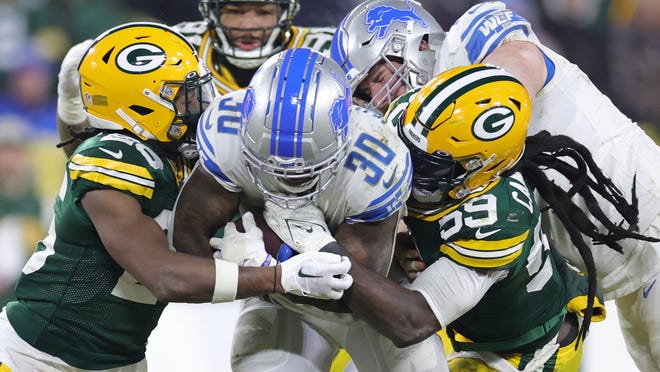 The free agent negotiating period opens in a little over seven weeks, but the Detroit Lions will be active trying to re-sign some of their own free agents well before then.

Most of the Lions’ 15 unrestricted free agents have expressed a desire publicly to return to Detroit, and Lions general manager Brad Holmes said the “majority” of those players have said the same thing behind closed doors.

“But I don’t ignore the reality of there’s other elements of that business that we’re going to have to deal with,” Holmes said last week. “But it was cool to hear because those guys believe in what we’re doing and they believe it’s the right way. They like how they’re treated, they can be themselves and it was just cool to hear that they think that we’re doing it the right way.”

The Lions prioritized re-signing their own free agents last spring, and Holmes said that will be the case again this offseason.

The Lions currently have about $18 million in projected available cap space, a number that should grow with veteran cuts and/or restructures in the coming months.

LIONS MAILBAG:Who benefits most from Ben Johnson’s return as OC

Money, contract terms, role, age and dozens of other factors will determine who’s back in 2023 and who signs elsewhere, but here’s one man’s rankings of the Lions free agents.

Chark did not have a great first season in Detroit, when he earned $10 million for 30 catches. Chark missed six games with an ankle injury, and has battled injuries throughout his career. He’s a young, talented vertical threat, though, and receivers are all the rage in today’s NFL. The Lions should try and bring him back for 2023, but other suitors will surely emerge.

Of the Lions’ top free agents, Elliott seems like the one most likely to play elsewhere in 2023. Spotrac pegs Elliott’s market value at $10 million, and the Lions already have one high-priced safety in Tracy Walker (who will make $9 million next season). If Walker’s rehab from a torn Achilles is on track and the Lions are comfortable with Kerby Joseph at the other starting safety spot, Elliott will have to go elsewhere to find the starter snaps he desires.

Anzalone had a career year in 2022 with 125 tackles, including seven for loss. He’s a defensive captain, and coaches have said repeatedly his play was a big reason why Malcolm Rodriguez was so effective as a rookie. The Lions do have two young linebackers in Rodriguez and Derrick Barnes, so they could save money by letting Anzalone walk. Regardless, Anzalone is one of the Lions’ best and most important free agents.

MONARREZ AND WINDSOR:Lions almost made playoffs, but which Detroit team is truly closest?

A waiver claim last spring, Cominsky emerged as one of the Lions’ most valuable defensive players in 2022. He had four sacks among 30 tackles and made an impact that went well beyond the numbers. He plays end and tackle, is a big part of the Lions’ third down pass rush and the Lions defense struggled when he missed time with a wrist injury. He may be more valuable to the Lions than most other NFL teams, which is why he’s a no-brainer to re-sign for 2023.

Williams had a better season than anyone else on this list, running for a career-high 1,066 yards and a franchise record 17 touchdowns, but he checks in at No. 5 because of positional value and the plethora of running backs slated to hit the free agent market (Saquon Barkley, Josh Jacobs, Tony Pollard, David Montgomery, to name a few). The Lions may want to upgrade their backfield this offseason, but Williams is worth keeping around.

Buggs told the Free Press late in the season the Lions already had opened dialogue with his representatives about a new contract. Whether he gets one remains to be seen, but Buggs had a nice season as a run plugger in the middle of the Lions’ defensive line. He’s a fit for Aaron Glenn’s defense, and he’s happy in Detroit. A short-term deal would make sense given the Lions could add to the trenches in the first round of April’s draft.

Woods is one of the best special teams players in the NFL, enough so that I thought about putting him higher on this list. He won’t make as much money as some of the Lions’ other free agents because he lacks a role on defense, but in terms of value, production and fit, he’s a player that’s important for the Lions to keep.

Brown has been invaluable as a backup interior lineman the past two seasons. He started most of 2021 at center, when Frank Ragnow was out with a toe injury, and was the team’s best right guard this season. The Lions have already invested a lot of money in their offensive line, and while a decision is pending on Hal Vaitai’s future, splurging on another interior lineman might not be wise given the contracts they have on the horizon. Spotrac projects Brown’s market value at $10.9 million.

9a and 9b. CB’s Mike Hughes and Will Harris

The Lions have major work to do on their secondary this offseason, and what they hope to accomplish there — in free agency and the draft — could impact what they do with Hughes and Harris in free agency. I lumped Hughes and Harris together because they’re both utility men who seemed to find a home in their roles the second half of the season. Hughes fits best as an outside cornerback, but can play in the slot, while Harris played his best football as a slot corner after spending 2½ years at safety. Harris earned the higher grade by Pro Football Focus, but the Lions can’t come out of this offseason with the same secondary they had in 2022.

Holmes praised the Lions’ pro personnel department for adding players like Cominsky, Buggs and Jackson to the roster late last spring and over the summer. Jackson emerged from the free agent scrap heap to become a reliable third running back and effective kick returner. If he returns, he’ll likely have the same role, which is why he comes in at No. 11 on this list.

Board did not have the defensive role many assumed when he signed with the Lions last spring. He has value as a coverage linebacker and a core special teamer, but his future may hinge on what happens to the linebackers in front of him on this list.

A year ago, Oruwariye looked like one of the Lions’ better pending 2023 free agents. Now, he checks in near the bottom of this list after a struggle-filled 2022 campaign. Oruwariye had 11 penalties and allowed a 106.1 passer rating, according to Pro Football Reference, in limited action this season.

A healthy inactive for the final five games of the season, Bryant never fully unleashed his pass rush potential in Detroit. All 4.5 of Bryant’s career sacks came in the 2021 season. He’ll likely land a backup job elsewhere this spring.

Sudfeld played nine offensive snaps in two games this season and did not attempt a pass. He’s a better backup than what the Lions have had in previous years, but he does not rank among the most coveted quarterbacks on the market.

After years of misogyny, racism and threats in Lansing, progressive women are in charge ⋆ Michigan Advance