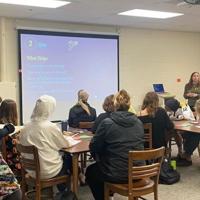 In 2021, the Grand Traverse County Commission received $18.2 million in American Rescue Plan funds from the federal government. At their last meeting of 2022, the county commission decided to allocate $10 million of those funds to 27 different proposals from the community, including two that will impact TCAPS students, staff and parents.

TCAPS’s peer-to-peer programming is based on the Peer-to-Peer Depression Awareness Program developed by the University of Michigan’s Depression Center. The program is built on the premise that teens are more likely to talk to and listen to other teens than adults when it comes to their struggles with mental health.

Individuals from UM’s Depression Center came up to Traverse City in early September and conducted training for staff and students at Traverse City West Senior High School and Traverse City Central High School. These trainings are meant to educate students about mental health conditions and concerns so that they can identify conditions like depression or anxiety in their peers, reach out to them and encourage them to seek help.

TCAPS received a $45,000 grant from Rotary Charities of Traverse City to help cover the cost of implementing the Peer-to-Peer program at WSHS and CHS. The total cost for the program is estimated at $67,000, TCAPS Communications Director Ginger Smith said in an email.

The peer-to-peer programming is already in full swing, but the students involved asked for a better space where, under staff supervision, students can gather or sit alone to relax and feel more comfortable during the school day if they feel overwhelmed.

TCAPS requested $22,000 in ARPA funding to conduct minor renovations at each school to build these rooms and furnish them. They were rewarded $10,000 from the county, but they also received $2,000 for equipment and supplies for the program through the Traverse City Rotary Good Works grant.

This first year, the peer-to-peer program is in a pilot phase, and TCAPS will decide whether or not to expand it beyond the high school level, Smith said in an interview.

“We’re doing everything we can to remove the stigmas associated with mental health and behavioral health problems,” Smith said. “This is just another step … to open up the conversation and make it a norm, make it so that you can say, ‘Hey, I’m not right with my feelings, and here’s why.’”

This work falls in line with a goal listed in TCAPS’s strategic plan to “Develop and implement structures and systems of support to increase mental and emotional health and social well being,” she said. It also aligns with TCAPS’s health and wellness initiative, which was implemented after TCAPS received the Rotary Charities Systems Change Accelerator Grant in 2021, she said.

TCAPS also will benefit from a $150,000 ARPA grant to Northwest Michigan Health Services.

In the fall, NMHSI received a $170,000 grant from the Michigan Department of Health and Human Services to create a child and adolescent and health clinic at Traverse City West Middle School. This funding from MDHHS is continuous to pay for salaries, but more funding was needed to renovate the space available at WMS.

TCAPS and NMHSI worked together to file a request for $150,000 in ARPA funding from the county, which was rewarded in full.

TCAPS has yet to start the bidding process on the renovations at the middle school required to build the health center, but the plan is for the center to open in the fall of 2023.

The clinic will be staffed by a nurse practitioner, a medical assistant and a behavioral health therapist, and it will be open three days a week, said Heidi Britton, NMHSI CEO.

WMS was chosen as the location for the clinic because it has the most physical space and most concentrated student body in the district, but it will be open to all TCAPS students, Britton said.

The clinic will have a board with students on it who will have a role in overseeing the clinic’s services and policies.

This model for a clinic, which MDHHS has been providing funding to schools and health services to develop for years, is “brilliant”, Britton said. It removes barriers that people face when trying to access care, and it reduces the amount of class time that kids would miss, Britton said.

It also will allow kids to be able to begin to understand the healthcare world and learn how to talk about their medical needs and advocate for their own care at an early age, she said.

“When we met with the team there at TCAPS, everyone was pretty excited about it,” Britton said. “Everyone knows it’s such a positive thing to put into a school district.”

Journalists Follow Up on Radon Mine Health Spas, Open Enrollment, and Health Fraud