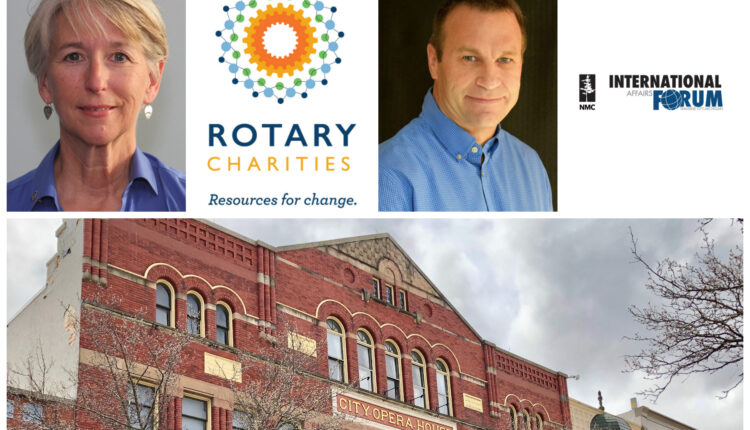 Expect some new faces at several leading local nonprofits this year. Major leadership changes are underway at Rotary Charities, the City Opera House, and the International Affairs Forum (IAF) at Northwestern Michigan College (NMC). 2021 will be a significant “change of the guard” for all three organizations.

Rotary Charities of Traverse City announced last month that Becky Ewing, the organization’s current CEO, would step down in June. Ewing took over the helm in 2018, assuming the position of CEO after the organization’s former 25-year-old head Marsha Smith retired. The search for Ewing’s replacement is ongoing. The application for the position was officially closed on February 28th.

Ewing tells The Ticker that she always intended to keep her tenure as CEO short. She has been with Rotary Charities for 13 years and says she actually considered retiring when Smith did so.

“We looked at what’s going on in philanthropy across the country to see where some of these emerging trends could be for bigger and better impact,” Ewing explains. “We came across system change as a concept with which we can invest more effectively in non-profit organizations. [We] decided to shift our overarching focus from empowering individual organizations to impacting the community. We have funded many programs and capital projects, and the systems lens we have put on things has helped us understand that our region is facing early childhood care, whether it is decreasing to increase the impact on some of the worst problems Poverty, whether it leads to better health outcomes – we knew we had to go further upstream and investigate some of the main causes. “

This revelation moved Rotary Charities away from their old model – what Ewing describes as the “Here’s your check, do your good job” approach – towards a more practical, collaborative strategy. Rather than retiring with Smith, Ewing took the helm to make this new era a reality.

Now that the system-driven model is firmly anchored in Rotary charities, Ewing is ready to take on her deferred retirement. Your term as CEO officially ends on June 30th.

Both Kristi Dockter, Marketing and Communications Director, were at the City Opera House; and Thom Paulson, Development Director, have submitted their resignation. Dockter officially ended her 11-year tenure with the organization on Monday (March 1), while Paulson, who has been in charge of fundraising for the opera house since 2016, is stepping down on April 1. The City Opera House will combine the two jobs into one. Applications through March 5th for the position of Director of Development and Marketing.

Diane Baribeau, executive director of the City Opera House, says it’s not uncommon for small nonprofits to play a combined marketing and development role. If you move in that direction, the opera house can convert two part-time jobs into a single full-time position.

“[The board] decided that combine [the two jobs] Seemed like the most logical answer given our budget and last year, ”says Baribeau. “The combination would allow us to invest more money in a salary. It also gives us some additional funds in our budget for the time being. “

The city opera house was badly affected by the COVID-19 pandemic, as live events were not an issue last year. The organization plans to reopen, with some events on the calendar for now for this spring and summer – although Baribeau believes fall 2021 will be more likely.

While the focus is initially on filling the vacant position, Baribeau tells The Ticker that the opera house is starting to think about succession planning for their own job. While she affirms that her retirement is “a few years away,” she suggests that the right candidate for the marketing / development job might be someone with an interest in eventually running the organization.

“Once a person felt comfortable [with the job]If they had a desire to learn my role – booking shows, event management, stuff like that – this could be an ideal candidate, ”says Baribeau.

Jim Bensley will serve as the interim director of the IAF, which hosts a monthly series of lectures with experts in foreign and domestic affairs, politics and the media. Bensley, who serves as the IAF board member, NMC professor of humanities and director of international services and service learning at the college, succeeds Leila Hilal who, despite the IAF’s 27-year history, became the organization’s first female director two years ago has been.

As interim manager, Bensley’s time at the wheel will only last until the end of 2021, with the search for a permanent director scheduled to begin this summer. While Bensley says his job is primarily to “sail the ship forward,” he notes that IAF is trying to expand the reach of its programming – something that is likely to affect both his tenure and the search for a new director becomes.

“We’re starting a strategic planning process with our board because we want to position ourselves for the future,” explains Bensley. “Right now our audience is an older population. We want to encourage those in their twenties, thirties, and forties to get involved in what we do because these people are the decision makers. After working in college, I am very aware that we are training future leaders. Whether it is about the climate, whether it is international relations, whether it is a question of migration problems, we must contribute to building up this catalog of knowledge. So if they have the chance to be in positions where they can make a difference, they will do the right thing. “

The previous, current, and future of the Michigan cannabis industry