Frontman Jason Singer is aiming for a ‘special night’ after being featured for Local Spins on WYCE, which also debuted tracks from Les Creatif, Cal in Red, Stovepipe, Trauna, The Go Rounds and others.

SCROLL DOWN TO RADIO SHOW PODCAST

Michigander’s Jason Singer has never been in a better place.

The anthemic pop band essentially ends their most successful US tour of all time tonight with a jam-packed show at The Pyramid Scheme in Grand Rapids, a performance that becomes a homecoming celebration for the Midland native and former resident of West Michigan.

It comes after an ambitious national tour and an ongoing widespread radio show for Michigander tracks like “Let Down” and “Misery”. 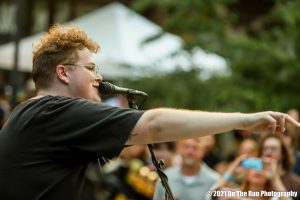 “The tour was the best tour we’ve ever had,” said Singer, who started his career in the Grand Rapids area. “We toured in a pretty tight bubble this time and it was pretty comfortable. But overall this trip was incredible. “

In addition, Singer is committed and optimistic about the future.

“I’m 29 years old now and I’m climbing to 30, which is strange,” he admitted. “I’m engaged now, which is cool. But for the first time I think I’m really happy. My goals haven’t really changed. I just felt more satisfied than ever before. “

He brought this optimistic attitude to this week’s edition of Local Spins on WYCE in the WYCE by performing acoustic versions of “Let Down” and “Misery” in the studio of the community radio station. Scroll down for the performances and the full radio show podcast, with the video for “Misery” here.

The Friday night pyramid scheme will also show sets of the reunited Fever Haze, Trauna and Dawn. Doors open at 7 p.m. Any tickets that could open cost $ 18 at the box office.

MICHIGANDER BAND “The best that ever was”

In a 2017 interview with Local Spins, Singer, who was living in Kalamazoo at the time, said his goal was to create “really great songs” for “the next American rock ‘n’ roll band”.

Now he insisted: “The band is the best that has ever existed. I love her so much.” Its star has surely risen as the band built a national audience, played at major festivals and won the WYCE Jammie Awards on the side (Michigander took home awards for the best album by a new artist in 2019 for “Midland”).

Tracks from his latest EP “Everything Will Be Ok Eventually” from 2021 have played more than 5 million times on Spotify alone.

The year 2021 is drawing to a close for Singer and his band, the future looks as bright as ever, with more new music in the works and the front man realizing that he has come to his own style as an artist. The band will even open for The Lumineers at the Aragon Ballroom in Chicago on December 6th and will be on tour with the Manchester Orchestra from February onwards.

“I’ve been working on writing some new tunes,” he said.

“Very excited about her. We also have a few surprises next year that I can’t wait to tell people about. “

The October 29th edition of Local Spins on WYCE – which highlights local and regional music on Fridays at 11am on WYCE (88.1 FM) and online at wyce.org – also included new music from Cal in Red, Les Creatif, Trauna, Dance Contraption, The Go Rounds, Flexadecibel and Stovepipe furnace, as well as tracks from Exuberant panic and The JetBeats. Listen to the radio broadcast here.