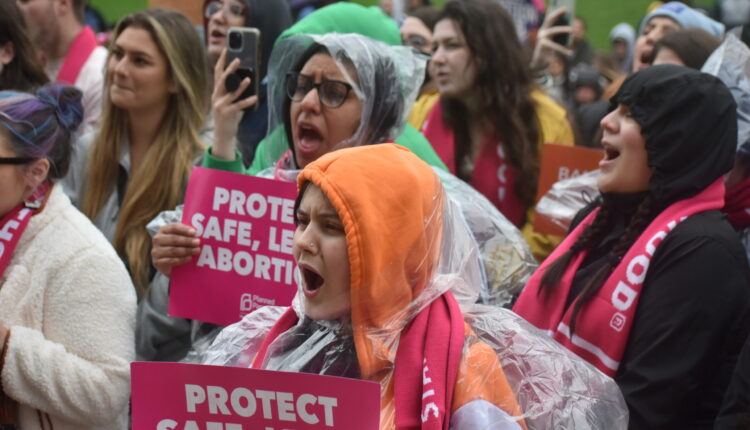 After months of silence on the multiple attempts in the courts to protect abortion rights in Michigan, the state Supreme Court ruled Thursday that voters should get the chance to decide if abortion rights should be enshrined in the state Constitution.

The question in front of the state’s highest court was whether the Board of State Canvassers acted outside of its ministerial power when members deadlocked last week on whether or not to certify the Reproductive Freedom for All (RFFA) ballot proposal summary.

The two Republicans on the evenly split board voted against certifying the proposal because of a spacing error that squished together some words in the proposal language. Opponents who challenged the proposal argued that the proposal is “gibberish,” but advocates for the proposal say that the language is still legible and state election law does not regulate spacing.

Five of the seven Michigan Supreme Court justices agreed with the RFFA advocates — four nominated by Democrats and one nominated by the GOP. Justices Brian Zahra and David Viviano, both nominated by Republicans, dissented.

“The challengers have not produced a single signer who claims to have been confused by the limited-spacing sections in the full text portion of the proposal,” said Justice Bridget McCormack in her opinion. “Yet two members of the Board of State Canvassers would prevent the people of Michigan from voting on the proposal because they believe that the decreased spacing makes the text no longer ‘[t]he full text.’”

The majority of the Michigan Supreme Court justices ruled that the board must certify the ballot proposal and voters will have the chance to either approve or reject it on Nov. 8.

The RFFA initatitive aims to amend the state Constitution to ensure Michiganders’ right to make and carry out decisions relating to pregnancy, including abortion, birth control, prenatal care and childbirth.

A majority of Michiganders support legal abortion in polling and RFFA submitted in July a record-breaking 730,000 signatures to get on the ballot, which analysts have said bodes well for the measure. However, anti-abortion advocates, such as Right to Life of Michigan, have indicated they’re willing to spend heavily against the proposal.

After the U.S. Supreme Court ruled to overturn Roe v. Wade in June, those for and against abortion rights have been watching the judicial action in Michigan play out, waiting to see who will have the final say on abortion access in a state that could be a bellwether in how legal fights will go nationwide.

Without precedence from Roe, Michigan has a 1931 law criminalizing abortion that is still on the books, but it is currently on hold as two cases slowly move through the courts. Beyond efforts through the RFFA initiative, there are also currently two lawsuits — one filed by Democratic Gov. Gretchen Whitmer, the other by Planned Parenthood of Michigan — to repeal the 91-year-old abortion ban.

Repeatedly, Whitmer has urged the Michigan Supreme Court to review a lawsuit she filed in April, asking the Court to determine if the state Constitution protects abortion. But so far, the court hasn’t taken up the issue.

However, there was action Wednesday in a lower court. A Court of Claims judge ruled that the law was unconstitutional and unenforceable.

Kansas was the first state to protect abortion access through the ballot box when voters came out last month in droves to reject a proposed amendment to the state’s constitution that would allow state lawmakers to restrict or ban abortion. Abortion rights advocates had high hopes Michigan would have a similar outcome, but that was halted by the deadlock.

The Michigan Supreme Court justices had a tight deadline to deliver a ruling after the board met last week. A decision needed to be made before county clerks’ deadline to certify general election ballots at 5 p.m. Friday.

In total, there are eight amicus briefs filed in this case. As of Thursday afternoon, seven groups and individuals filed amicus briefs arguing that the challenge against the RFFA proposal has no merit — Michigan United, a Detroit-based nonprofit advocacy group; Neal Goldfarb, an attorney with expertise in linguistics and lexicography; a group of University of Michigan professors; Attorney General Dana Nessel; The Michigan Chapter of the National Association for the Advancement of Colored People (NAACP); League of Women Voters of Michigan; and prosecuting attorneys from Washtenaw, Genesee, Ingham, Kalamazoo, Marquette, Oakland and Wayne counties.

Another group — composed of the American Decency Association, Faith2Action Michigan, Transformation Michigan, Michigan Heartbeat Coalition and Michigan Pastors Alliance — wrote in favor of the board’s decision to reject the proposal.

In ‘Barbarian,’ a Detroit Airbnb is a house of horrors