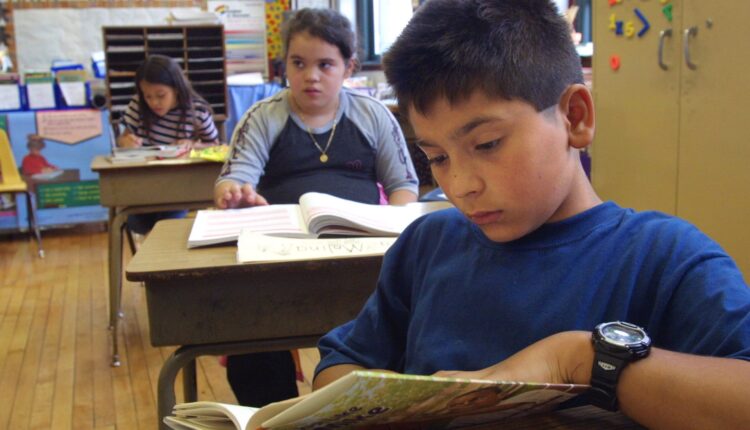 A new report shows Michigan ranks seventh-worst in the nation for fourth grade reading scores as education leaders grapple with what to do with the state’s Read by Grade 3 law.

The 2023 State of Michigan Education report, released by the Education Trust-Midwest, projected that Michigan will remain “stagnant at that level by 2030” unless the state implements changes “to address the state’s growing education crisis and worsening opportunity gaps for underserved students.”

Michigan fell from 32nd in 2019 to 43rd in fourth grade reading scores on the 2022 National Assessment for Educational Progress (NAEP).

While the statewide literacy ranking is bleak, it’s worse for Michigan’s students from low-income households and Black students who ranked lower for reading and math than their white and affluent classmates, according to the report.

“Latino students, Black students, students with disabilities and students from low-income backgrounds were falling at least 12 percentage points below the statewide average in terms of third grade reading,” said Jen DeNeal, Director of Policy and Research for The Education Trust-Midwest. “Early reading is a really important indicator of future success, so even as early as third grade we see these really large opportunity gaps between groups.”

For Black student performance, Michigan dropped into the bottom five for fourth grade reading in 2022, down from previously being ranked in the bottom 10 in 2019. Between 2019 and 2022, Michigan’s Black students lost nearly 11 points on fourth grade reading, meaning that they lost an entire school year of knowledge during that period. White students declined about four points during that period.

“Every Michigan student deserves opportunity and access to the educational resources and support to realize a bright future, but that’s not the reality for many of our state’s students,” said Amber Arellano, executive director of the Education Trust-Midwest. “We have to act urgently to change that. Michigan’s students deserve the same opportunity for success as students in leading education states, where real transformation and real improvement in student performance are happening.”

Students in Lansing Public Schools, Saginaw School District and Detroit Public Schools Community District lost approximately a year of math and reading, while students in Birmingham lost the equivalent of 20% of a school year, according to the report.

The report also looked into disparities in salary between teachers who teach in the state’s wealthiest districts and the highest poverty districts. According to data from 2020-21, the difference between salaries was about $6,000 annually. “This is really important because we know that if teachers are the driver of student success, then we want all students to have access to quality teachers,” said DeNeal. “If you would be making less money and not being paid what you’re worth as a high value employee, then you’re unlikely to go to the higher-poverty districts, or you might be more likely to leave those schools. This is just something else that makes it harder to recruit and retain the highest quality teachers.”

One major education priority for the Democratic-led Legislature is to make changes to the state’s Read by Grade 3 law. The law aims to improve Michigan’s low literacy rates by requiring schools identify struggling students through students’ scores on the English Language Arts portion of the state’s standardized test, the M-STEP, and implement interventions for struggling students.

Read by Grade 3, signed into law last decade by former Republican Gov. Rick Snyder, requires schools to retain third graders who score below 1252 on the M-STEP — a cut point that measures one year of instruction lost. This is the most controversial piece in the law and Democrats are likely to soon amend the law and remove retention.

While most eligible third-grade students were not held back for this school year due to broad exemptions to the law, Black students were more likely to be retained than their white classmates. Districts held back retention-eligible Black students at higher rates than students of any other race or ethnicity in 2021-22 and were 2.4 times as likely to retain Black than white students, according to a recent report from Michigan State University’s Education Policy Innovation Collaborative (EPIC).

Education advocates are hoping that lawmakers will expand support for reading interventions and literacy coaches when reworking the reading law, especially in districts with higher need.

“Our position has generally been that accountability should fall on the system, not on the students” DeNeal said.

Education Trust-Midwest called on state lawmakers to make these changes to change the trajectory of Michigan’s literacy rates: