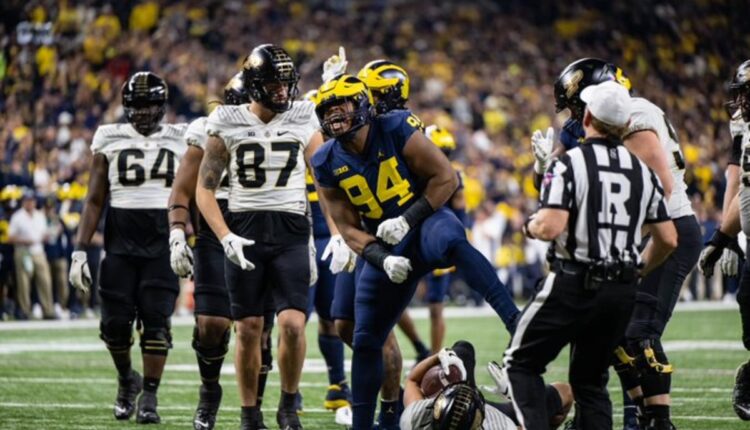 Know Your Foe: Michigan Football Players to Watch Ahead of the Fiesta Bowl

The 6-3 192lbs. quarterback is one of the best young quarterbacks in the nation. McCarthy is a pro-style quarterback, but has turned more into a rushing quarterback as the season has progressed. Michigan offense is based around the run, but take that with a grain of salt, because they can definitely sling it as well. He struggles slightly with the deep ball, however as he has gotten more comfortable under center his deep ball game has gotten tremendously better, as some may have seen when he played against Ohio State. TCU needs to slow down the run and force McCarthy to throw the ball to be successful in this matchup. He is young and can make mistakes so it is so important for TCU to get to him early and disrupt him from getting into his rhythm.

5-11 190lbs. Donovan Edwards has definitely filled the void and made his presence felt after Michigan’s starting running back Blake Corum went down with a season-ending injury. Just because he was the backup does not mean he is not a great running back, because he is. He is a powerful and explosive back who is very hard to bring down. He has shown that he also has very good hands and can be used as a receiving option. Edwards is also very quick, he shows great and quick bursts of speed. As coach Sonny Dykes has said they will have to slow Edwards down and make McCarthy throw the ball to succeed. The Frogs absolutely shut down Bijan Robinsonso I think they are up for the challenge.

This 6-0 190lbs. is a solid receiver, don’t let his size trick you. Although he may not be the biggest and tallest receiver, he uses his long arms to his advantage. Bell also has great hands, and can make tough contested catches. He also has very quick acceleration, which makes him very dangerous downfield. The TCU secondary need to watch him and all the other Michigan receivers, because their speed could make the Frogs pay. However the Frogs are a quick team, and I expect them to be able to keep up with them.

Wilson is another receiver who isn’t the tallest, but is again not somebody to take lightly. He is 6-0 185 lbs. and is very quick. Roman Wilson has been said to be there fastest player on their roster. He is very dangerous in open field, and is very good on stop and go acceleration making him hard to bring down. TCU will have to make sure he doesn’t get open in open field or else he will take it to the house.

The 6-7 305lbs. offensive tackle is one of the many reasons, for Michigan’s successful offense. Hayes provides protection for the quarterback with his large frame, and helps provide large holes for the running backs. He is a huge piece of this team, and could cause havoc for the Frogs defensive line. The Horned Frogs will have to get a set plan to get the pressure to not only the quarterbacks, but also to slow down the rushing game.

The 6-3 337lbs. defensive lineman is one of the best defensive players in the nation. He causes so many problems for offenses, because he is very strong and quick. He is very good at getting through gaps before offensive lines have time to react. Smith also makes it hard on running backs, because he is very quick and on top of them before they know it. TCU will have to work hard to keep him out. I think the Frogs will be ok because Max is a very mobile quarterback, however they need to work hard to give Duggan some time to make his passes.

Want to join the discussion? Click here to become a member of the Killer Frogs message board community today!

Remembering life, legacy of those who died in Greater Lansing