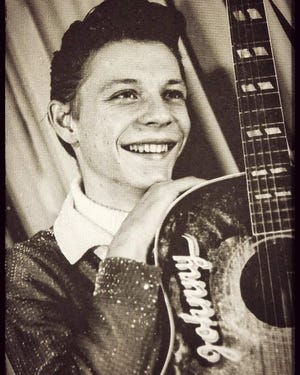 Johnny Powers liked to say, “They called me the northern Yankee with the southern heart.”

Powers, a singer and guitarist who arose in the mid-1950s as one of Detroit’s early rock ‘n’ roll trailblazers, died Monday at his home in northern Michigan after a series of health issues. hey what 84

Known for his work with iconic labels such as Detroit’s Fortune Records and Memphis’ Sun Records, Powers retained an avid international cult following well into his later years. Acclaimed for songs such as “Long Blond Hair” and “Honey Let’s Go (To a Rock and Roll Show),” he continued to embrace a style and sound that harked back to a metro Detroit era of cruising, record hops and drive-in Hamburger joints.

Powers would go on to work at Motown Records in the 1960s before making his own business forays with a pair of Detroit studios and song-publishing interests.

Alongside Detroit peers like Jack Scott and Don Rader, Powers was among the crop of musicians who transitioned from country music to rock ‘n’ roll in the ’50s, helping set the stage for southeastern Michigan’s rise as a rock music hotbed.

Born John Pavlik in 1938 on Detroit’s east side, he grew up in a family of Polish heritage in Utica and bought his first guitar for $2.50 when he was 15. Taught to play by a neighborhood friend from West Virginia, he was performing with the soon local country band Jimmy Williams & Drifters at Macomb County spots such as Bill’s Barn and Colonial Hall.

Powers was still in his teens when he became enchanted by Carl Perkins’ “Blue Suede Shoes” and “Honey Don’t,” catching the rock ‘n’ roll bug.

“It was new. It felt good,” he told the Detroit Free Press in 2003. “I was in a band playing these country songs, and they’re square dancing. And all of a sudden this rock ‘n’ roll stuff — whoa! The energy level it gave you, the adrenaline, was unbelievable.”

In 1957, Jack Scott’s first national release, “Baby, She’s Gone,” showed powers which way the winds were blowing in Detroit and beyond.

Still going by the surname Pavlik at the time, he headed to Detroit’s Fortune Records and paid for a recording session. There, he said, studio operator Devora Brown bestowed him the name “Johnny Powers” ​​after spotting him munching a PowerHouse candy bar.

“People say, ‘Johnny, you sound a lot like Elvis, like those imitators.’ But I’m not. I hate to hear that,” Powers said. “I just happen to have that kind of voice. And that’s probably what got me with Sun Records.”

Powers’ brief stint with Sun in 1959 produced singles such as “With Your Love, With Your Kiss.”

“The most exciting thing was being there for the birth of rock ‘n’ roll — experiencing the crowds, the guards holding people back, getting your clothes ripped off,” he told the Free Press.

Powers is often categorized as a rockabilly artist, but he flinched at the label.

“They call it that now, but it was rock ‘n’ roll,” he said. “The term ‘rockabilly’ today is from when country music finally gave in and the artists started bouncing their music a little more. But our music was called rock ‘n’ roll.”

At Motown, Powers rubbed shoulders with the company’s roster of young talent and said he drove Stevie Wonder home from the studio as the ’67 Detroit riots flared.

Powers said he was always proud to be associated with Detroit’s rich musical heritage, claiming it as a badge of honor throughout life.

“We had the best creativity here for one big reason: the people who immigrated here,” he said in 2003. “We had the best jazz musicians, the best R&B musicians, some of the best country musicians. With that combination, you couldn’t get this anywhere in America or the world. It had the R&B touch. That feel of the musician and his instrument, you can’t write it on paper.”

As the decades rolled on, Powers continued to record while performing regularly in Michigan and overseas. He’d been hoping to make a European gig this spring, but his final performance turns out to have been a Las Vegas concert in 2018.

A private funeral will be held Sunday in Utica.

Members of Congress sign up for TikTok, despite security concerns ⋆