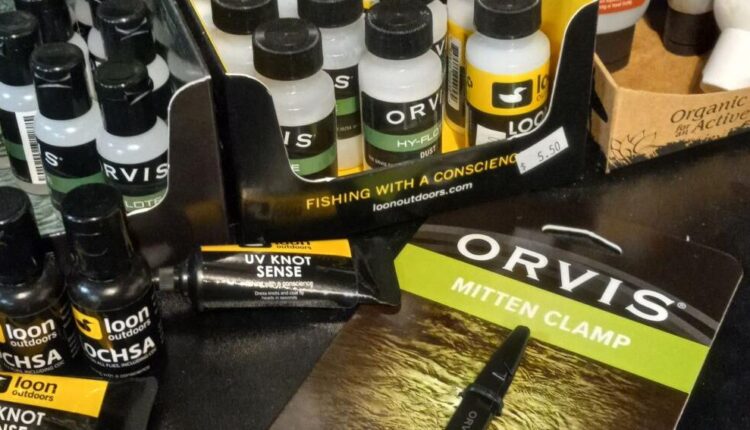 It sounds strange, but there’s something I find oddly relaxing about getting ready to go fishing.

It hits me right about the time I turn off the radio, pull down a two-track, and don’t see a vehicle already parked in “my spot.” The shoulders ease, the heart rate calms, and a part of me slips away from the world. For many people, the truck gets thrown into park and it’s a mad dash to the river to wring as much stream time as possible out of the precious couple of hours. But for me, I soak up the tailgate time to help my mind shed whatever’s muddled it from the day.

Tailgate time consists of slipping into waders, stringing the rod, and loading up my vest for the day with the gear and fly boxes stuffed into an old wooden Winchester ammo box. I’ve developed a habit of loading and unloading my vest after each trip in the interest of taking only what I’m pretty sure I need to fish or might need for an emergency. For me, it is as much a part of the fishing experience as being on the river.

Contrast this with my brother, Chris, whose vest is ready for any scenario — just in case, ya know, a salmon is lurking in our parents’ little bluegill lake.

It’s no secret that fly fishing is among the most “gadget-y” of outdoor pursuits. New stuff comes out every year promising to make our lives easier, especially for those of us finding it more difficult to thread spider web-thick line through miniscule eye hooks. Tackle companies are constantly honing their competitive edge to develop the “next best thing” for the fly-fishing vest.

The old saying is that many of the gadgets catch more fisherman than fish, but there really is gear to make our lives easier. Dave Leonhard at Streamside Orvis in downtown Traverse City calls these items, “…’better than’s,’ as in ‘better than what we’ve always used.'” On a chilly Saturday after Christmas, Leonhard and I chatted in the gear and gadget nook of Streamside, where he revealed the “better-than’s” he helped people find for themselves and for gifts.

First on the list were mitten clamps, a new take on the traditional forceps, or hemostats, used to extricate a hook from a fish’s mouth (or angler’s finger) and mash the barb down on hooks. With a quick squeeze, they’re released and ready for action, and the tension is much stronger than the old-style forceps. My thumbs always get stuck in my forceps, leftovers from when my sister was in physician’s assistant school and learning how to tie sutures. These middle clamps are certainly better than the old style and will find a place in my vest come spring.

Leonhard next pulled off the shelf a collapsible wading staff. I sure could’ve used one when I fished for pink salmon in the Rapids underneath the International Bridge in Sault Ste. Marie while going to college. However, the collapsible staff is better than the old solid version — or a sturdy stick — in that it’s much more packable; it snaps-to with a flick of the wrist through an integrated bungee cord; and with it able to be collapsed and stored, it won’t tangle your feet or line while you’re casting to or fighting a fish.

UV-curing products make the job of securing heavy knots and patching waders much easier than even just a few years ago, Leonhard said, picking up a tube of Loon’s UV Knot Sense. I use a thin UV head cement for tying flies, and with a quick zap from a UV flashlight, the cement dries solid. There are UV-curing compounds for knots and wader patches, too. The liquid solidifies quicker under a UV light, but simple daylight cures it as well.

Speaking of waders, Leonhard hefted a wading boot off the shelf and described how new innovations are making the traction on rubber-bottomed boots better than the old, felt-soled bottoms. While useful for preventing slippage on wet rocks, felt-soled wading boots can also pick up and transport invasive aquatic organisms from one watershed to another. Leonhard explained that companies like Vibram and Michelin have been developing new treads and materials specifically for anglers to gain better traction walking in algae- and rock-littered rivers.

And when you do catch a fish, today’s newer nets contain a rubber mesh net bag that is better than the older cotton bags. This rubber, almost silicone-type material is gentler on fish by not removing their protective slime or scales, Leonhard said. Additionally, the fish and your fly don’t get nearly as tangled inside, and it holds up over time and sun exposure. Pair it with a better-than magnetic net release clipped to the back of your vest. These are longer than the prone-to-breaking retractable reels used to hold nets, making them easier to get into the water to nab your catch.

Often while fishing, we jump from spot to spot. Waders are pushed down around the ankles, vest is left on, and we spot a truck farther down the river. Transporting the rod during those times can be tricky and dangerous. Better than tossing the rod loose into the back of the pickup for it to rattle and clatter is using a rod sleeve, one of Leonhard’s favorites. This synthetic mesh “tube” of sorts reminded me of a finger-trap type of toy. The whole or taken-down rod — still strung with line but the fly and reel hanging out — can be slid inside, and it holds it with some protection. No more dismantling everything and packing away, or taking your chances by leaving it loose. Sort of a best of both worlds.

Several good mayfly hatches happen in the evening hours, so the walk back to the truck is always fraught with shadow monsters. Leonhard pointed out the LED headlamps that now charge through the USB port in your car. These hold a charge for quite some time, and if — and it’s a big if for me — you remember to plug it back in when you get to the car, it’ll be ready to go the next evening. Even though these can be better than a regular flashlight, it’s not a bad idea to have a battery-operated one as a back-up if undertaking lengthy night fishing.

Whether you prefer to load up your vest or take only what you need, the key is selecting those items that minimize irritation while you’re supposed to be relaxing and enjoying yourself. This winter is a great time to audit your gear. It might be time for an update.