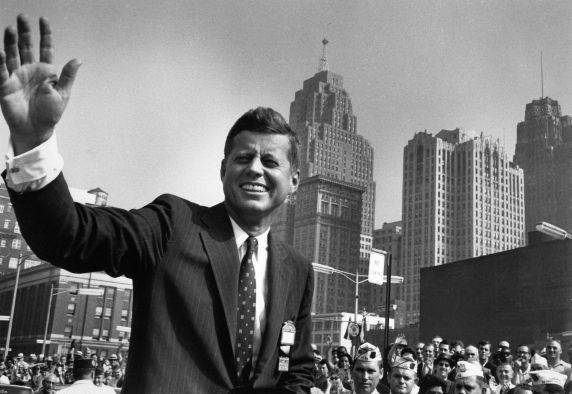 On Sept. 4, 1960, U.S. Sen. John F. Kennedy (D-Mass.) arrived in metro Detroit to participate in the city’s annual Labor Day that was held the following day.

After his flight arrived at Metro Airport in Romulus, he was greeted by Democratic Gov. G. Mennen “Soapy” Williams.

“… Tonight we are in Detroit. We did not make that trip for pleasure,” said Kennedy. “We made it because we believe it is vitally important that the Democratic Party win this election. This country cannot afford, nor can the whole free world afford, four more years of a do-nothing Republican leadership.”

On Sept. 5, Kennedy appeared in downtown Detroit at the Labor Day parade and addressed thousands during a rally held at Cadillac Square.

Both Kennedy and Nixon made a strong play for Michigan’s Black vote. At that time, African Americans were active members of both parties.

Detroit’s Black population doubled between 1940 and 1950 and African Americans were demonstrating their collective political muscle by the 1950s and were winning more elections.

Some Detroiters point to a little known June 1960 private meeting that pushed Kennedy over the top with the growing African American demographic in Michigan and throughout the Midwest. Kennedy flew the party on a private plane, according to Saul Green, Forrest’s son and future U.S. attorney for Michigan’s Eastern District.

“[Kennedy] had an opportunity to gather these respected Black thought leaders to help make his case [for the presidency],” recalled Green, who was a 12-year-old Tappan Junior High student at the time.

There, they urged the Massachusetts U.S senator to adopt a stronger civil rights platform.The Rev. Horace Sheffield III said his father made the case

“What are you going to do for Black folks?” said Sheffield III about the question that his father likely had for Kennedy. Ultimately, Kennedy won the Democratic nomination three weeks later at the party’s convention held in Los Angeles. And in November, he did well with Black voters in states like Michigan and Illinois.

Williams, who was white and a progressive, became Kennedy’s assistant secretary of state for African affairs. Kennedy also tapped several Detroit African Americans to serve in his administration such as lawyers Hobart Taylor Jr. and Kermit Bailer. He also appointed Wade McCree to a federal judgeship.

Kennedy was assassinated in November 1963 in Dallas.

In 1964, a public meeting place only 500 feet from where he spoke in Detroit on Labor Day 1960, was dedicated as Kennedy Square. Several Michigan public schools are named after John F. Kennedy.