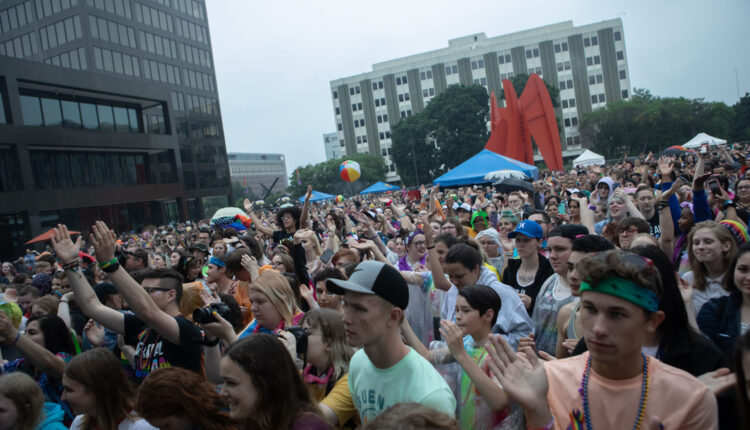 In an effort to make Pride safer, Grand Rapids Pride Center announces no police will be at festival ⋆

Two years ago, as calls for racial justice were ignited across the country in the wake of a white Minneapolis police officer murdering George Floyd, a group of activists called on the Grand Rapids Pride Center to take a hard look at itself.

“The group of BIPOC [Black, Indigenous and people of color] activists called out the Pride Center and said, ‘We want to support you, but you have a history of not listening to minority voices in general and specifically Black and trans voices,” said Jazz McKinney, who at that time was the center’s only Black board member and is now its executive director. “So they gave us a list of demands as a center and said, ‘Hey, if you want to say you’re serving all LGBTQ people, you need to recognize there are things people of color or trans people or Black trans people experience that are different than their white counterparts.”

McKinney was immediately on board.

“It happened after the whole country blew up about George Floyd, and it was like, ‘The time is now or never,” they said. “Essentially, these activists basically said, ‘If you don’t do this, we are no longer going to participate with the Pride Center.’”

Floyd was a Black man murdered by a Minneapolis police officer, Derek Chauvin, after a grocery store clerk called 911 to report he believed Floyd had used a counterfeit $20 bill. Floyd died after Chauvin pinned Floyd to the ground with his knee, a moment that was captured on video and sparked worldwide rallies for racial justice and widespread protests against police brutality in a country reckoning with the collision of white supremacy and law enforcement.

One of the demands from the Grand Rapids activists was that no police be present at the Grand Rapids Pride Festival — a whirlwind of live music, food and vendors that draws thousands of people to the West Michigan city’s downtown to celebrate the LGBTQ+ community and is set to take place Saturday.

The call for no police at Pride, McKinney explained, was rooted in the Grand Rapids Police Department’s long history of police brutality, Floyd’s murder, and the fact that Pride began as an uprising against police who in 1969 raided the Stonewall Inn, a gay bar in New York City.

The protests that ensued at Stonewall were part of a deeply rooted LGBTQ+ movement that included the Society for Human Rights, founded in Chicago in 1924; the Mattachine Society, formed in Los Angeles in 1950; and such protests as the Cooper Donuts riot in Los Angeles in 1959, the sit-ins at Dewey’s restaurant in Philadelphia, and the Compton Cafeteria riots in San Francisco.

That movement continues today as LGBTQ+ leaders and allies fight some 300 pieces of anti-LGBTQ+ legislation that have been proposed in 28 states this year alone. Of those 300, roughly 140 bills target transgender youth.

Pride festivals and events across the country are grappling with questions around safety and security in the face of far-right violence. In Coeur d’Alene, Idaho, for example, police detained 31 men who allegedly planned to riot near a Pride event on Saturday, June 11. The men are members of a white nationalist group called Patriot Front and had traveled to Idaho from other states; the group was armed with riot shields, shin guards and a smoke grenade, authorities said.

The next day — which was the six-year anniversary of the shooting at Pulse, an LGBTQ+ nightclub in Orlando, Fla. — five members of the far-right group the Proud Boys, one of the organizers of the Jan. 6 insurrection, shouted slurs at a drag queen story hour at a library in San Lorenzo, California. That same day, approximately 30 people protested a drag brunch show in Texas that raised money for two charities.

Earlier in June, violent threats led the town of Apex, N.C., to cancel a drag queen story hour event that was a part of its Pride festivities. Edwin Rodriguez writes the names of the victims of the Pulse Nightclub shooting at the front of the nightclub building on June 21, 2016 in Orlando, Florida. | Gerardo Mora/Getty Images

The Grand Rapids Pride Center’s executive director emphasized that “absolutely the safety of the LGBTQ community is paramount.”

That, McKinney said, is “why I don’t want police there.”

Instead of police, the Pride Center hired two security companies, one that is owned by a gay man and another where the CEO is a gay man.

“Some security guards will be armed, and the armed security will be around the perimeter,” McKinney said “They’re going to be in uniform so they’ll be obvious. They’re the people I trust more than random GRPD people who may not care about the community or understand the community.”

When the demand around policing was first made in 2020, and the following year, the Grand Rapids Pride Festival was held virtually in light of COVID-19 — but this year the event is once again being held in person and organizers wanted to make an officer-free Pride a reality.

Originally, the police – who can attend an event even if organizers request otherwise — told them they would be there. Frustrated and disappointed – and, particularly in light of a police officer shooting and killing Patrick Lyoya in April, frightened for Black and Brown festival-goers’ safety — Pride Center leaders were determined to work with the city to change regulations around policing and events.

Then, for reasons the police did not explain, the department announced it would no longer have any officers at the festival. On June 10, the Pride Center made the announcement: Their hopes for a police-free event had come true.

“The Grand Rapids Pride Center remains committed … to the belief that cops are the actual safety issue for many in our community – particularly those who are Black, assumed-immigrant, visibly non-Christian, visibly non-gender conforming, neurodivergent, disabled, and many more, especially the people whose identities overlap these categories,” the Pride Center wrote in a social media statement announcing that police would not be at the festival.

A GRPD spokesperson said in an emailed statement that the department “is committed to providing a safe environment across the city and aligning police resources in a way that accomplishes that in an effective manner.”

“For all permitted special events, GRPD works with the City’s Office of Special Events and event organizers to determine safety and security needs based on a number of factors,” the statement continued. “Not all events need officers specifically assigned to them in addition to the regular patrol operations. For instance, there is another event that morning, a 5K race, that requires support for traffic control along the route.”

The GRPD spokesperson wrote that officers will be working in the downtown area and “will be available for any calls for service or needs from the Pride Festival and/or its attendees.” But it’s the fact that police will not be patrolling the event that ultimately makes everyone safer, McKinney said, noting the GRPD’s history of violence – including a white police officer, Christopher Schurr, shooting and killing Lyoya, a 26-year-old unarmed Black man, following a traffic stop in April. Schurr was charged this week with one count of second-degree murder.

“Even if police are called for something little, that little thing could turn into something deadly,” McKinney said. “Patrick Lyoya got pulled over for a traffic stop and ended up dead. No traffic stop should end up in death for anybody.”

For Aaminah Shakur, the Pride Center’s accessibility coordinator, having no police at the festival is a matter of the event being accessible.

“If Pride isn’t safe for Black and Brown people because of cops, it isn’t accessible,” they said. “Cops aren’t safe to trans people, period. So it’s not accessible.”

There has been some pushback to no police being at the event, and McKinney and Shakur said Pride Center leaders are having important conversations with members of the LGTBQ+ community in Grand Rapids around equity and safety.

“White — especially cisgender — gay people who have assimilated and think cops are their friends, or that cops keep them safe, or that they can be cops now and that is an achievement — they are completely lacking in historical context, in my honest opinion,” Shakur said. “But also they are willfully ignoring the racial dynamics today, and you cannot do that. You just cannot.” Police not being at Pride is part of an extensive plan to become more inclusive — what the center calls its “community accountability plan” — McKinney said. For example, the center this year has made changes to make Pride more accessible for individuals with disabilities, including creating a more wheelchair-friendly festival grounds and offering a “sensory space” where “people can sit down, hang out and get away from the noise,” McKinney said.

When it comes to racial justice, McKinney — the center’s first Black executive director — said they’re working hard to recruit more diverse volunteers and provide trainings around anti-racism and disabilities, among other initiatives.

“I’m trying to revamp this whole damn place,” McKinney said. “My motto is if I’m able to center the most historically silenced, most underrepresented person of our community, everyone will naturally benefit. If a Black trans woman in a wheelchair who is a sex worker came through those doors, would she feel welcome here at the Pride Center? If not, my job is not done.”

McKinney — who is also an Indigenous, Two-Spirit person — said they plan to create a Two-Spirit group and a disability group at the Pride Center, as well as relaunch its BIPOC group.

“I have so much I want to do,” said McKinney, who noted that they plan on holding community listening sessions once Pride is over to discuss what people would like to see from the center.

“The LGBTQ community is so vast — we’re a beautiful, vast community — and I want to hear from them,” they said.