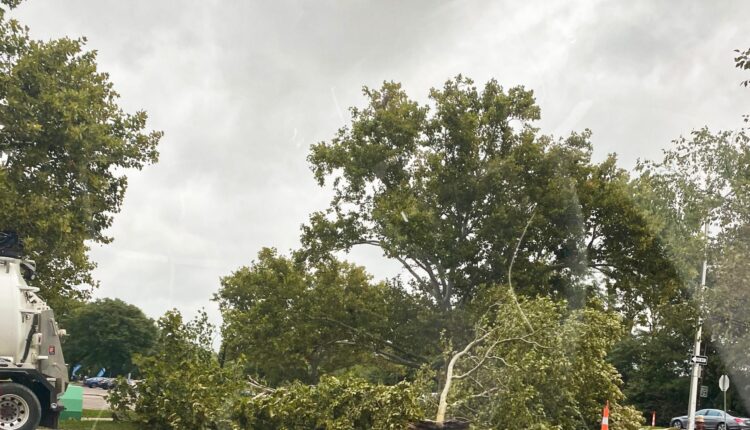 How Detroiters can report downed trees, power lines and outages

The City of Detroit and DTE Energy are offering residents affected by downed trees and power lines in the aftermath of Monday’s storm tips on how and where to report the damage and get help.

Detroiters are being urged to report fallen trees through an online tool or the Improve Detroit mobile app. Trees that have come down on homes, cars or that are blocking streets are being prioritized first, according to the city, and will be handled within 48 to 72 hours. Residents are also asked to report any trees that have fallen on city property by calling (313) 628-0900.

John Roach, a spokesman for Detroit Mayor Mike Duggan, said the preferred way to report a downed tree is through the Improve Detroit App, which generates an automatic record and work order for an initial inspection. The city only assumes responsibility for cleaning up trees in the public right of way, but it will remove trees planted on private property if they come down across a city sidewalk or roadway.

As of Tuesday afternoon, the city had received more than 150 calls about damage related to the wind storm, according to Jeremy Thomas, a communications manager for the city’s Parks and Recreation Department. The city’s west side was hit hardest, he said in an email. There are no reports yet of city property damage and no major streets are blocked by trees, he added.

Keep away from downed lines

Downed power lines are extremely dangerous and should be reported to an emergency line maintained by DTE Energy at (800) 477-4747. Roach said Detroiters should also call 911 to report downed lines so public safety officers can secure the area surrounding a down line until DTE crews arrive.

DTE issued guidelines, advising individuals to stay at least 20 feet away from a downed power line and never to drive across one. Two children in southeast Michigan, ages 8 and 14, were electrocuted in separate incidents after touching live power lines knocked down in the Monday storm. The 14-year-old was killed, according to authorities in Monroe.

Outages to continue through Thursday

The National Weather Service recorded wind gusts up to 70 miles per hour that blasted through Detroit Monday evening. The gusts knocked down trees and power lines and led to widespread power outages. DTE did not immediately respond Tuesday to a request for comment on the damage in Detroit.

Close to 250,300 DTE customers remained without power as of Tuesday afternoon. DTE reported an estimated 3,300 power lines were knocked down across its service area, which covers southeast Michigan. The company has estimated that 80% of customers who lost power in Monday’s storm will have it restored by Thursday evening. It’s unclear how long the remaining 20% will have to wait.

DTE customers can report an outage at their address by using an online form.

Detroit also provides an online guide to conserving resources and staying cool during extended outages. Key tips include keeping hydrated and unplugging appliances to keep them protected in case of a power surge.

Detroiters can seek a $25 credit from DTE if they have experienced an extended power outage or repeated blackouts over a 12-month period. Learn more about eligibility and how to apply on DTE’s website.

According to the Michigan Public Service Commission, residents are eligible for a $25 credit if they experience:

DTE Energy does not take responsibility for property damage caused by an act of nature, such as storms and high winds. The utility, which services all of Detroit, has faced some criticism from residents over repeated outages during storms. DTE is asking state regulators to approve a rate increase in part to pay for infrastructure improvements that would make the electrical grid more resilient in extreme weather.

DTE may leave brush, branches and debris outside private property so tree trimmers can keep working in the aftermath of damaging storms. City crews clean up yard waste left on the curb on a biweekly basis as long as the debris is cut into sections no longer than 48 inches. Details on pickup schedules and tree services are available on the city’s website.

Yard waste can also be brought to the following drop off locations:

The Detroit City Council in July approved two contracts to remove trees that aren’t in the public right of way. Council Member Scott Benson, who serves District 3 on Detroit’s northeast side, noted at the time that the city wasn’t always in a financial position to prioritize tree maintenance.

authored by
First published at https%3A%2F%2Fwww.bridgedetroit.com%2Fhow-detroiters-can-report-downed-trees-power-lines-and-outages%2F