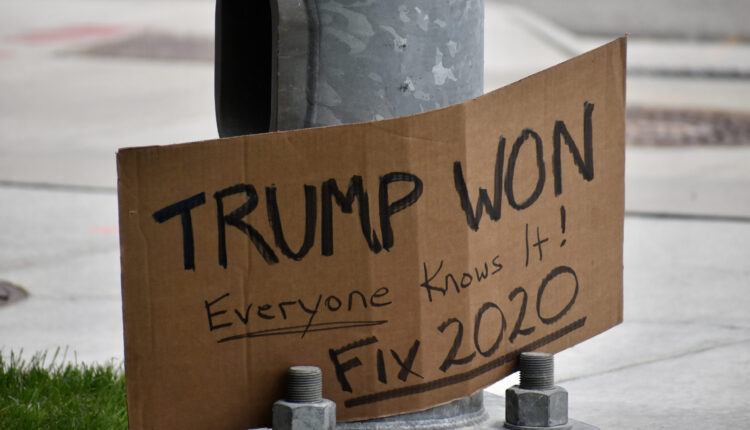 Half of incoming Michigan GOP lawmakers are election deniers ⋆

Despite a wave of “pro-democracy” candidates winning office on Nov. 8, a large portion of election deniers on the ballot have also secured positions of power in the new Michigan Legislature — as well as two individuals in the state House who were at pro-Trump protests in Washington, D.C., last January.

Attention has mostly been focused on the defeats of election deniers at the top of the ballot, both in Michigan and nationwide. Republican Tudor Dixon lost to Gov. Gretchen Whitmer, Republican Kristina Karamo was defeated by Secretary of State Jocelyn Benson and Republican Matt DePerno was beaten by Attorney General Dana Nessel.

Democrats also wrested control of both chambers of the Michigan Legislature for the first time in almost 40 years. However, the next class of lawmakers will still include a bevy of election deniers.

Combining both chambers, 50% of incoming GOP lawmakers in Michigan — 36 out of 72 — will have been involved in various efforts to undermine faith in Michigan’s 2020 election that was won by President Joe Biden. Actions range from publicly and baselessly surmising that “fraud” may have occurred to signing onto lawsuits to overturn the election and participating in the insurrection at the U.S. Capitol.

“Michigan voters showed up in record numbers on Election Day and made very clear that elections are about protecting our freedom to vote, and they know we still face continued threats to our democracy,” said Dianne Byrum, state lead for the Washington, D.C.-based Defend Democracy Project.

“Michiganders know that politicians who deliberately put up barriers to voting should be held accountable because what they’re trying to do is silence people and have minority rule over the majority.”

Byrum is a Democratic former leader in the Legislature who now chairs the Michigan State University Board of Trustees.

With Republicans controlling both chambers for the last session, no members or members-elect who sowed distrust in Michigan’s election system since the fateful 2020 presidential election have faced consequences from GOP leadership for their actions, despite multiple calls from Democrats.

Those include a resolution from incoming House Speaker Joe Tate (D-Detroit) urging the U.S. Department of Justice to investigate 11 House Republicans for seditious conspiracy and another condemning fake GOP electors. Current House Minority Leader Donna Lasinski (D-Scio Twp.) also pushed for a bipartisan panel to investigate Michigan’s role in the insurrection and state Sen. Adam Hollier (D-Detroit) introduced a resolution condemning the actions by pro-Trump insurrectionists, among other efforts.

When asked by the Advance if new legislative leadership would take action next term, neither Democratic spokesperson for either chamber offered comment.

State Rep. Matt Hall (R-Marshall) and state Sen. Aric Nesbitt (R-Lawton), who have been selected to lead each chamber’s GOP caucus in the new Legislature, are also among those who questioned 2020 election results.

Nesbitt signed onto a November 2020 letter from Republican lawmakers to Benson propping up baseless voter fraud allegations and asking for a full “audit.”

House GOP caucus spokesperson Gideon D’Assandro confirmed on Friday that state Rep. Matt Maddock (R-Milford), who was removed from the caucus in April amid reports that he shared details from confidential caucus meetings, will be back in the caucus in the new session.

While there’s been a range of efforts by Republicans to deny the 2020 election results, Maddock is one of two incoming lawmakers who hit the road in January 2021 for “Stop the Steal” efforts in Washington, D.C.

Maddock is a strong ally of Trump, along with his wife, Michigan GOP Co-Chair Meshawn Maddock, who was one of the fake GOP electors at the Michigan Capitol on Dec. 14 when the Electoral College met. Matt Maddock also was at that protest where the electors unsuccessfully tried to enter the building where the real Electoral College was meeting.

Maddock signed a letter urging former Vice President Mike Pence to delay certifying the election, has warned of an impending “Civil War” amid false election claims and spoke to a crowd in D.C. the day before Jan. 6, 2021, insurrection.

Meshawn Maddock organized buses to transport Michiganders to Washington, D.C., for the January 2021 pro-Trump protests. On Jan. 6, she tweeted that the rally included “(the) most incredible crowd and sea of people I’ve ever walked with,” but later said she was not present for any of the violence.

State Rep.-elect Angela Rigas (R-Hastings) was at the Jan. 6, 2021, insurrection at the U.S. Capitol where pro-Trump protesters sought to stop Congress’ certification of Biden’s win. Rigas claims she was tear-gassed within the Capitol grounds and considers being called an “insurrectionist” and “terrorist” a “compliment.”

There are a total of 23 election deniers in the new state House, composing nearly 43% of the 54-member House GOP caucus.

Smit and Hoadley also were endorsed by Trump.

In the Senate, 13 of the 18 incoming Republicans are election deniers, making up 72% of the new Senate GOP caucus.

As the Advance reported last week, state officials have indicated that Bumstead is under criminal investigation for allegedly forging signatures on absentee ballots during the 2016 election.

Despite the significant numbers of lawmakers winning who have questioned the results of the 2020 election, Byrum expressed optimism given big victories on Nov. 8 for voting rights and pro-democracy leaders.

“All of us who care about voters’ freedoms and free, fair elections are confident that the passage of Proposal 2 enhancing election security and access, plus new leaders who value our democracy can help us prevail over these anti-voter politicians and their anti-democracy friends,” Byrum said.

What do the Detroit Pistons do now?

This Grand Rapids suburb competes for the Clark Griswold trophy. Here’s how you take half.