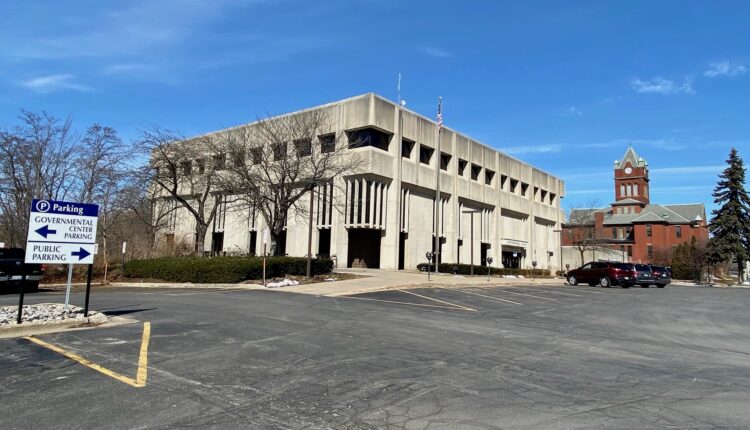 The City of Traverse City, Grand Traverse County, and The Watershed Center Grand Traverse Bay are working on a potential green redesign of the Governmental Center’s parking lot and waterfront along the Boardman River, realigning parking lots through angled parking lots, and renovating the crumbling boardwalk to make it accessible for improve all users.

Grand Traverse County’s Brownfield Redevelopment Authority (BRA) agreed on Thursday to provide up to $ 200,000 as a local game for the project. The Watershed Center will apply to the state for a Nonpoint Source Pollution Grant (NPS) for additional project funding by Nov. 5, with the total price approaching $ 1 million. NPS pollution occurs when pollution does not come from a single source but from many diffuse sources, such as “runoff from paved surfaces in an urban area,” said Grand Traverse County’s Assistant Administrator Chris Forsyth.

At the Governmental Center, rain that runs across the parking lot picks up dirt, oil, gasoline, and other pollutants and ends up in a parking lot rain drain that flows directly into the Boardman River and eventually into Grand Traverse Bay. There’s no treatment for this rainwater before it gets into the river, said Shawn Winter, Traverse’s city planning director. If the parking lot were to be redesigned green, “the water would be designed in such a way that it is treated by seeping through the ground so that it does not go straight into the drain,” said Winter.

The project plans to add green infrastructure to two parking lots, including installing bio-retention systems in the southern section and replacing some impermeable materials with permeable paving stones in the northern section. While impermeable surfaces are hard and create runoff because water cannot penetrate them, permeable surfaces allow water to seep into the underlying soil and be filtered by the soil. “We’re reducing the amount of impenetrable sidewalk (on the property),” said Winter.

As part of the project, soil drilling will initially be carried out in the parking lot of the Governmental Center – a process that has already begun – in order to search for existing soil contamination so that further pollutants are not accidentally released during reconstruction. BRA Director Anne Jamieson-Urena said government grant requirements require evidence that there is no underground contamination; If contamination is found, staff would “remodel and relocate” the infrastructure to ensure these areas are not disrupted, she said.

While the parking lot would keep the same size, Winter said the project could add about 20 spaces in the government center by converting the parking lots into 90-degree angled parking lots. In response to feedback from BRA board members to make the property safer and more welcoming for visitors trying to cross and enter the government center, Winter agreed, saying the property would “feel a little different” than his existing configuration. This includes better defined areas for events like trick-or-treating or protests, he said. The project also calls for significant improvements to the river promenade, which “needs a lot of work,” Forsyth said. A retaining wall and ADA improvements are planned to make the river more accessible to all users.

Both Forysth and Winter said they hoped the project would serve as a model for other community projects. “We know in both the city and the county that rainwater management, these types of issues, is a problem nationwide,” Forsyth said. “(Pollutants) get into our catchment area, they affect our water quality.” Forsyth said the redesign of the Governmental Center parking lot with green infrastructure could be “a demonstration project for the wider community to say, ‘Look, this is a possibility “Addressing issues from a public infrastructure perspective” that other local government entities might be looking at. ”

Winter agreed, noting that most do not comply with the city’s recently passed rainwater ordinance because so many municipal parking lots have been built in the past. “The city and many of our communities have rainwater ordinances to regulate rainwater runoff,” he said. “We are currently in this facility, which does not meet our own standards. So we want to set a good example and show, at least in private developments, how rainwater can be weakened on site instead of simply dumping it into the gullies. “

City Commissioner Tim Werner, who sits on the BRA board, was the only no to the 4: 1 vote of the board in order to provide funding for the project. Werner said he was skeptical of vague efforts to clean up the pollution without clear metrics in place to measure the effectiveness of the project. “We’re not trying to fix something this body is normally involved in, so we anticipate future pollution,” he said. “We recognize that we will have pollution in the future, and the community will pay for it for the people who park their vehicles out there.” Werner asked if there were better ways to tackle runoff pollution, such as cutting about half the parking space in half or charging for parking and using those funds for improvement. “I’m all for green infrastructure and rainwater treatment … but what is the goal of this project in terms of pollution?” He said. “I just don’t see anything here yet.”

Staff said rainwater runoff was a known problem and that the demand for parking at the Governmental Center is already high and likely to increase with the construction of two new buildings across the street at Boardman and Eighth Streets, including the new Commongrounds cooperative will. “We expect our parking lot will be in demand from customers and users of these two buildings,” said Forsyth, adding that the government center is likely to see more demand “on weekends and maybe even during the week.” Winter also pointed out that the government grant requires pre- and post-inspection of site conditions so data will be available to measure the effectiveness of the project. District Commissioner Ron Clous, who sits on the BRA board, pointed out that the government center parking lot needs to be improved with or without green infrastructure. “If we can get help with financing and have a nicer parking space than just paving what’s there, then I’m for it,” he said.

According to a schedule provided by the staff, the project partners should know by next summer whether the state has approved the NPS grant funding for the project. If the grant application is successful, environmental studies and planning will be carried out in winter 2023.