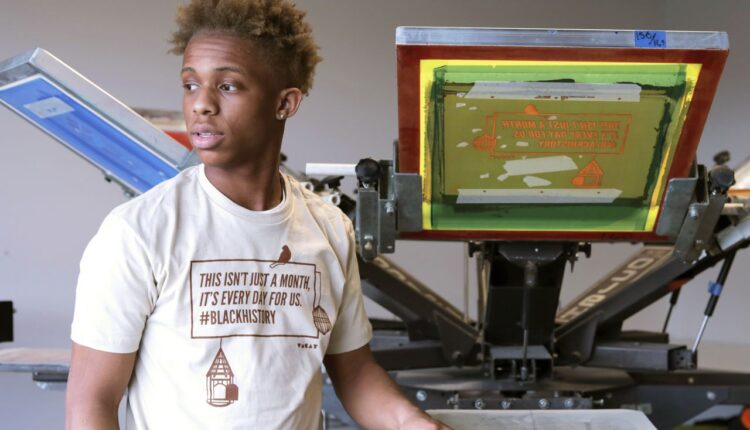 This message served as inspiration for the 16-year-old when he designed Black History Month shirts, which are now sold in hundreds of retail stores across the country.

Brown, a junior at Grand Rapids University prep academy, was hired by Meijer to design his own t-shirt as part of the retailer’s Black History Month collection, which sells eight shirts and sweatshirts in the Midwest this month.

His shirt features a picture of a bird out of a cage designed by Grand Rapids artist Jasmine Bruce and an original quote from Brown: “This is not just a month, it is commonplace for us. #blackhistory ”

The image of a bird leaving its cage was inspired by Maya Angelou’s poem, “Caged Bird,” and its themes of captivity and freedom, Bruce said.

“It was very popular with both of us to honor the life of black people and to share the meaning of black history with others,” said the artist in a prepared statement.

But it wasn’t until 2020, after the assassination of George Floyd, that Brown began to look at black history in a different light. Floyd’s death sparked nationwide protests and riots over police brutality and systemic racism, and sparked a movement to change the way America’s cities are monitored.

Rather than associating Black History Month with the past, Brown wanted to get the message across that today’s events shape history for tomorrow.

“Knowing what’s going on with protest and police brutality really influenced the shirt,” Brown said. “Our story is now. What’s going on now will be our story for the next 20 to 30 years.

“We need to establish our history now so that it can be talked about and be a legacy for generations as it was in the past.”

Each of the 4,000 t-shirts were hand-printed in Grand Rapids through the West Michigan Center for Arts + Technology. This nonprofit engages Grand Rapids High School students in creativity and community engagement through arts and technology programs after school and during the summer.

Brown is a WMCAT student, and the proceeds from his shirts support the nonprofit’s mission to provide equitable access to opportunities in West Michigan.

The shirts were sold in 220 Meijer stores in six states this month – Michigan, Wisconsin, Indiana, Kentucky, Illinois, and Ohio. The shirts can still be bought while stocks last, even after February.

“This shirt design is clearly meaningful and we are pleased to be able to offer it to our customers as part of our Black History Month collection,” said Colley in a prepared statement.

Brown said he didn’t realize the entire project when he first volunteered to design the t-shirts. When he found out his work was going to be on display in Meijer stores in the Midwest, he knew he was “a really big influence”.

“I’m really proud of myself,” he said. “But I’m a very humble person.”

The 16-year-old said his parents are usually more excited about the performance than he is.

“My mother was crying and telling me to keep going, she knew I would always do something big,” he said. “My father bought the t-shirt and asked me to sign it, he wanted to put it in a frame.”

Brown said some of his friends even bought the shirt without knowing who designed it, and then called him when they found out it was made by him.

“It really showed me that before they even hear the story or endorse someone they know, people understand this shirt,” he said. “I really hope this shirt opened everyone’s eyes that Black History Month is every day for us.”

The 16-year-old has big goals for himself and this t-shirt project is just the beginning.

Brown is currently double enrolled in Grand Rapids Community College and will study financial advisor when he graduates. He said he loved math and wanted to learn how to manage finances and help others do the same.

“I just want to be great in life and be very stable financially and embed generational wealth,” he said. “That is my whole goal in life.”

To make it easier for you to navigate this complicated school year, we’re happy to provide an easier way for you to receive all of your education news: Our New Michigan Schools: Education in the COVID Era Newsletter will be delivered straight to your inbox. To receive this newsletter, simply click here to subscribe.

The Genesee County author writes books that encourage black children to “find beauty in being different.”

Milder afternoon with some rain