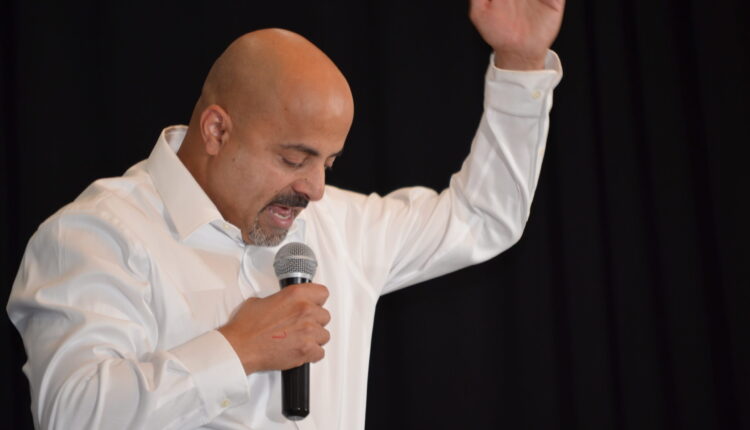 Michigan has the second-largest Arab American population in the nation with 221,631 residents as of 2019. In midterm elections defined by hot-button issues like book bans and reproductive rights, this could prove to be a key voting bloc.

But now Republicans see an opening to woo culturally conservative voters in the community, even after supporting strong anti-immigration policies, such as former President Donald Trump’s so-called “Muslim ban.” Former Michigan GOP National Committeeman Dave Agema led the fight last decade against “Sharia law” in Michigan. There’s a persistent right-wing conspiracy theory that it has been in place in Dearborn.

Dixon has said she’ll sign legislation banning “pornographic” books if she ousts Democratic Gov. Gretchen Whitmer on Tuesday, as part of a slate of anti-LGBTQ+ education policies, including a Florida-style “Don’t Say Gay” law. However, Dixon has never released a list of titles she wants banned since proposing the measure in September.

Nagi Almudhegi, a 40-year Dearborn resident and information technology professional, has traditionally voted for Democratic candidates, but he said at the GOP rally that he’s switching parties.

“I had a Eureka moment,” said Almudhegi, who is Arab American.

“I grew up as a Democrat … and voted for the Democrats in the last [presidential] election. But over the last few years, the Democratic Party has gone further and further away from our values,” said Almudhegi at the event.

Rola Makki, a Lebanese American Republican Party precinct delegate from Dearborn, has helped to organize local residents to get books with LGBTQ+ themes and/or characters banned in the city’s high schools.

“My loyalty doesn’t lie to the right or the left. It lies just to my community, to my child and my future community,” Makki said during a Oct. 13 school board meeting.

Both DePerno and Karamo attended the raucous Dearborn Board of Education meeting. They are facing Democratic Attorney General Dana Nessel and Democratic Secretary of State Jocelyn Benson, respectively, on Tuesday. The Michigan Republican Party did not respond to a request for comment for this story.

Fueled by fliers that said, “protect our children,” protests have been held  backed by Michigan GOP Co-Chair Meshawn Maddock, as well as members of the right-wing group Moms for Liberty. In response to a September rally in front of Dearborn’s Centennial Library. Hammoud said “people can disagree on ideas without letting bad-faith actors tear our community apart.”

“… Make no mistake: at their core, these are attempts to limit our freedoms and it will not stop there,” he said. “The same dangerous ideology that once considered people like me ‘a problem’ in Dearborn is now being revived under the guise of preserving ‘liberty.’”

“Things got really messed up, is about the only way to describe it,” said Truscott. “It’s this racially motivated knee-jerk reaction. I think the whole [GOP] relationship with the Arab community went south very quickly, as they felt more like vulnerable targets of the anger.”

Michael Bsharah, who’s of Lebanese descent and worked in communications for former Dearborn Mayor Michael Guido, points out that many prominent Republicans have labeled some Arab Americans as terrorists for the last 20 years or so in the wake of the 9/11 attacks.

Bsharah said some on the right in Michigan are being disingenuous in their partnering with Arab American voters to ban books.

“Some elements of the Republican Party know where to poke and where to try and make people feel that they have a seat at the table when they would just assume not have them at the table,” said Bsharah. Dixon had a history of criticizing Arab and Muslim communities on her show on the far-right media network Real America’s Voice. The Metro Times last week reported that Dixon called hijabs “oppressive garments” and suggested Iranian women are being “murdered by their own family” for marrying without their consent. Many Muslim women say they are happy to wear a hijab, as it is a symbol of their faith.

In 2019, Jimmy Aldaoud, a 41-year-old Iraqi national with diabetes and severe mental illness who had lived in America for the majority of his life, died in early August after being deported from Oakland County by Immigration and Customs Enforcement as part of Trump-era immigration policies. His family held a vigil at the Chaldean Community Foundation in Sterling Heights attended by U.S. Rep. Andy Levin (D-Bloomfield Hills), who had advocated for Aldaoud’s return. Martin Manna, president of the Chaldean Community Foundation, predicts that his politically divided community of of Iraqi Christians will likely reject Proposal 3, which would amend the state Constitution to ensure Michiganders’ right to make and carry out decisions relating to pregnancy, including abortion, birth control, prenatal care and childbirth. Manna added that the abortion rights measure is driving Chaldeans, many of whom are Catholic, to the polls.

The foundation has been carrying out voter outreach efforts, including canvassing. Manna said that both major parties have a good relationship with his organization.

“They reach out to us all the time,” said Manna.

Michigan Democratic Party (MDP) Chair Lavora Barnes said that her party “has invested in an infrastructure that allows our organizers and our candidates to have those discussions in communities across the state.” The MDP has an Arab American caucus.

“Michigan is an incredibly diverse state and we have Black, Latino, Asian Pacific Islander, Arab and Chaldean voters in all 83 counties. The MDP works every cycle to increase the diversity of voter turnout all over the state,” said Barnes.

She also noted the MDP has a voter protection hotline with support offered in English, Spanish, Arabic, and additional support for the Native American communities. The hotline phone number is 1-833-MI-Votes.

The Arab-American community in Detroit has deep roots, beginning with a group of Syrian and Lebanese merchants who immigrated in the late 1800s.

The first Muslims settled in Highland Park near the Ford Motor Co. Model T plant where many of them worked. The first Palestinians arrived between 1908 and 1913 and were Muslim, according to the Arab America Foundation.

Chaldeans first migrated to Detroit between 1910 and 1912, before the establishment of modern Iraq as a state. Here in America the George family, father Tom and brothers, Michael and Sharkey, led Melody Farms Dairy Company beginning in 1950 and helped to encourage other Chaldeans to go into business. Although some Yemenis arrived in the Detroit area as early as 1900, they established a significant presence in the Detroit area between 1920 and 1925, at a time when the Motor City’s population was skyrocketing.

James Karoub, a Highland Park Democrat, was one of the first Arab American legislator in Michigan. He served in the Michigan House in 1963 and 1964 and from 1965 to 1968. In 1968, he founded a Lansing-based lobbying organization. Many Arab-American lawmakers have followed in Karoub’s footsteps. Spencer Abraham, an East Lansing native of Lebanese descent served one term as U.S. senator from 1995 to 2001. Prior to that, he was Michigan Republican Party executive director. He also served as U.S. Energy Department secretary during the George W. Bush administration.

Emgage PAC, a Washington, D.C., national bipartisan Muslim civic engagement organization, actively worked to get out the vote for Levin and U.S. Rep. Rashida Tlaib (D-Detroit) ahead of the Aug. 2 primary. Tlaib, a daughter of Lebanese immigrants, is the first Palestinian-American woman to be elected to Congress, won her primary. Levin was defeated by U.S. Rep. Haley Stevens (D-Waterford Twp.).

This year, Emgage PAC organizers have knocked on 14,600 doors as part of a grassroots campaign to defend congressional allies against unprecedented spending by the American Israel Political Affairs Committee (AIPAC) and its affiliates.

There also have been election reforms to help the Arab American community in Michigan. For the August primary election, Arabic language ballots were available for the first time in state history at clerk offices in the cities of Dearborn and Hamtramck.

“It’s important that our democracy continue to be accessible and secure for every Michigan voter,” said Benson. “In a moment where there are so many efforts to divide and deter citizen engagement, it’s inspiring to see Dearborn, Hamtramck and Wayne County leadership come together to show government can be responsive to citizens’ needs and deliver results. Their work will directly help citizens in their communities be informed and engaged voters, and our state’s democracy will be healthier as a result.”