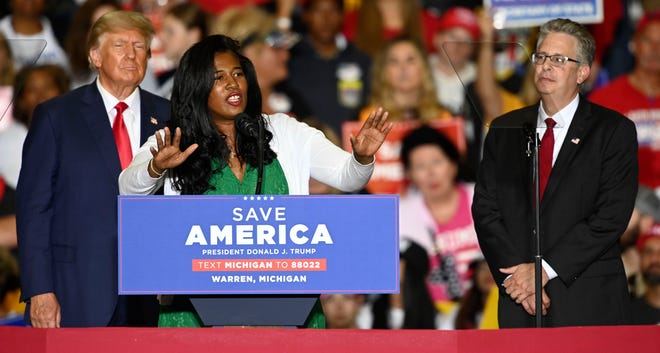 Kristina Karamo, the Republican candidate to be Michigan’s secretary of state, filed a lawsuit, two weeks before Election Day, asking a judge to require residents of Detroit to vote in person or obtain their ballots in person at the clerk’s office.

The suit, which is unlikely to succeed and appears to conflict with the state constitution, would throw into question thousands of absentee ballots that were obtained through the mail in Michigan’s largest city. The filing was among the first legal moves targeting the 2022 midterm election in the state after a rush of litigation by supporters of former President Donald Trump attempted to overturn the 2020 vote.

Karamo, who’s running to be the state’s top election official, is listed as the lead plaintiff for the new suit. It was dated Wednesday and filed in Wayne County Circuit Court. Five other individuals and the Election Integrity Fund and Force — a Troy-based nonprofit that has advanced unproven claims of election fraud — were the other plaintiffs.

Detroit City Clerk Janice Winfrey and the city’s board of election inspectors are named as defendants in the lawsuit.

The filing wants a “visiting judge” to intervene. The 37-page suit is seeking an overhaul of how Detroit runs its elections based on past criticisms of its process and unproven claims of legal violations. The city uses absentee voter counting boards to tally absentee ballots at Huntington Place, the Detroit riverfront convention center, but its systems and policies are similar to those elsewhere in the state.

“The AVCB (absentee voter counting board) has many problems that cannot be remedied,” the lawsuit said. “As it is an optional process, it must be sent to the scrap heap of history.”

The court should order Detroit to halt the use of absentee ballots that “are obtained without identification” and “halt the counting of ballots cast through drop boxes that are not effectively monitored,” according to the lawsuit.

The suit cited the film “2000 Mules,” saying it showed unlawful activity through ballot drop boxes in Detroit. However, the film didn’t provide proof of wrongdoing in Michigan.

“You cannot file a lawsuit to overturn a provision of a Constitution,” Edevbie said. “That is something you learn in the first semester of law school.

“If I had filed a lawsuit like this when I was actively practicing law, I would have been fired the next day.”

It wasn’t immediately clear why Detroit’s processes on ID for absentee ballots or counting ballots cast through drop boxes would be different than other jurisdictions.

Other communities use absentee voting counting boards similar to Detroit’s, including in neighboring Oakland County, where a joint counting board handled 144,000 absentee ballots during the November 2020 election.

The Oakland County counting board this year will handle absentee counting for 18 communities, including some of the county’s largest such as Southfield, Pontiac, Royal Oak and Ferndale.

“The court should require all Detroit voters to vote in person or obtain their ballots in person at the clerk’s office,” the lawsuit says. “This is the only valid process of identity in the statute because the MI SOS (Michigan secretary of state) failed to promulgate a signature comparison rule.”

As of Monday, the city of Detroit had received 80,607 absentee ballot applications, had sent out 78,563 and received 35,629 completed ballots, according to data from the Secretary of State’s office. It’s unclear how many of those ballots were obtained in person versus by mail. It’s likely the majority were obtained through mail.

Michigan’s current standards for verifying absentee ballots are based around the submission of personally identifying information to register to vote and checking signatures on the ballots against state records.

Democratic Secretary of State Jocelyn Benson proposed ways to tighten the state’s signature verification rules earlier this year after a judge in 2021 found that rules Benson issued ahead of the 2020 election should have gone through the administrative rule-making process. For the past seven months, the GOP-led Legislature has had the option of adopting Benson’s new rules, but are instead allowing a 270-day clock to run before the rules take effect by default in late December.

More:Judge knocks down some of Benson’s new election rules; state to appeal

Until those new rules take effect, Michigan law dictates that clerks match required signatures on absentee ballot applications and absentee ballot envelopes with the voter signature on file. The state law doesn’t define what it means for the signatures to “agree sufficiently.”

After Trump, a Republican, lost Michigan’s 2020 presidential election to Democrat Joe Biden, a series of lawsuits unfolded to try to alter the outcome. However, judges’ rulings, more than 200 audits and an investigation by the GOP-controlled state Senate Oversight Committee upheld the result.