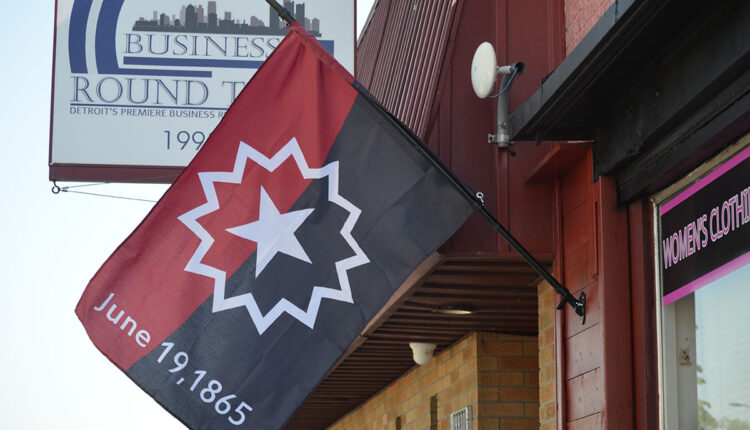 Freedom is something to be celebrated

After the racial reckoning of 2020, Juneteenth and the celebration of Black freedom, has emerged as a prominent holiday in Detroit.

June 19, 1865, or Juneteenth, marks the day that Black people in the Galveston, Texas, area learned that slavery had ended — more than two years after President Abraham Lincoln issued the Emancipation Proclamation. Slavery officially ended in America on Dec. 6, 1985, when the 13th Amendment was ratified and became part of the U.S. Constitution.

“People want to celebrate,” said Branden Snyder of Detroit Action, a nonprofit social equity advocacy organization, who first learned about Juneteenth as a University of Michigan student 15 years ago.

“For Black folks in this country, and across the Diaspora, that’s our thing, being in the community, building a community and to celebrate,” he said.

Snyder also has lived in Houston, Texas, where he said he learned of the importance of the celebration. COVID-19, he noted, has played a role in the increase in Juneteenth celebrations. Detroit Action will offer as many as 250 people food and host “political strategy conversations” on ensuring safer communities and voter suppression legislation during a Saturday neighborhood summit at the Farwell Recreation Center.

“For us at Detroit Action, it’s about how we celebrate our ancestors. How do we celebrate the journey to fight for freedom and how do we celebrate the goal of building communities,” he said. “It’s that pain whether it be over COVID, the economic downturn, the police killings that we see. It’s bringing people together to cherish the time that we have.”

Detroit-based historian Michael Imhotep has been participating in Juneteenth activities for the past decade and said that in the last two years the number of events in Detroit and around the nation have dramatically increased. Imhotep cites the May 2020 killing of George Floyd, last June’s remembrance of the 1921 Tulsa, Okla., riot when whites destroyed a thriving Black business district, and President Joe Biden’s 2021 signing of legislation that recognizes Juneteenth as a federal holiday as the prime reasons.

The host of “The African History Network Show” on WFDF-AM (910) said recognizing Juneteenth as a celebration must be coupled with an opportunity to learn about American history and embracing the need for present day political, economic and social change that benefits Black people.

“It can’t just be a cookout on Juneteenth,” said Imhotep, who will be a presenter at a Saturday Juneteenth celebration in Mount Clemens. “You have to have education about the history of Juneteenth. The history of the Civil War and Reconstruction.”

They include a Friday “rhythm and art” block party at Eastern Market, a Saturday business stroll along the Avenue of Fashion and a Sunday set of events at Eastern Market that will feature poetry readings, live music, face painting, basketball giveaways and food trucks.

Yet, after Juneteenth became a federal holiday in 2021, some recall how Detroiters have struggled over time to recognize the date.

During his days as a popular westside bookstore owner beginning in the late 1950s, through his work as a cultural activist and as a member of the Michigan House of Representatives, Edward Vaughn has continually and enthusiastically shared the history of Black emancipation from slavery.

Before Juneteenth became a national holiday, Black people of the diaspora celebrated freedom on different dates and in distinctly local ways.

“We did all the time,” said Vaughn, now 87 years old. “In Dothan, Alabama, where I’m from, it was celebrated on May 28 and we called it Emancipation Day. It is when we first heard about [the Emancipation Proclamation]. It has always been important to me to educate our people about it.”

African Americans in Ontario, Canada, celebrate freedom on Aug. 1. That date recognizes the position on the calendar in 1834 that marked the end of slavery in the British Empire when the 1833 Abolition of Slavery Act took effect.

Vaughn said he returned to his hometown several years ago but still visits his Motor City family often. He’s pleased to hear that an increasing number of Black people in Detroit are carrying on with Juneteenth celebrations.

In Detroit for several decades, during the 20th century on either New Year’s Eve or New Year’s Day, many Black houses of worship celebrated and were inspired by the Lincoln-issued Emancipation Proclamation of Jan. 1, 1863, the seminal action that began a process of releasing Black people from bondage in many states.

For many years two of Detroit’s oldest Black churches, Second Baptist Church, founded in 1836, and Bethel A.M.E. Church, founded in 1841, occasionally held joint emancipation services. Topics lifted up Black people’s experiences along the Underground Railroad and their service during the Civil War, and compared the perseverance, tragic and triumph of the 1800s with current day issues.

In 1941, for example, NAACP National Executive Secretary Walter White delivered a spirited message during an emancipation service at St. Stephens AME Church on Detroit’s west side. Speaking on the subject of racial discrimination in the armed services and in defense manufacturing plants, White called for activism and organizing.

“What emancipation? It is still nothing but a scrap of paper,” he said at the time.

In the end of the 1980s, emancipation services at Detroit homes of worship decreased. Some of that change had to do with a new generation of clergy leaders and a growing shift toward celebrating Kwanzaa, the African American-created cultural celebration that is held during the end of December and culminates on New Year’s Day.

Former Detroit Mayor Coleman A. Young was among the first local government officials to recognize Juneteenth. The city’s first African American mayor, who was born in Tuscaloosa, Ala., and raised in Detroit, did so through a proclamation in 1976.

Through the years, other elected officials in Detroit advanced the holiday.

Artina Tinsley Hardman, an African American Detroit Democrat, sponsored the Juneteenth Freedom Day bill for four years in the early 2000s in the state House. However, it failed to attract a single committee hearing.

State Rep. Michael Murphy, a Black Lansing Democrat, also sponsored a bill during that time lifting up the Juneteenth celebrations in Lansing that had been held since 1993.

In June 2005, then Michigan Gov. Jennifer Granholm signed legislation designating the third Saturday in June as Juneteenth National Freedom, making the state the 18th in the nation to do so. It came after State Sen. Martha Scott, an African American Democrat in Highland Park, introduced a resolution.

Hardman said she did not learn about Juneteenth in grade school and she said she offered the resolutions so that others would. Juneteenth, she said, should not only be a celebration of emancipation, but it should inspire African Americans to help improve their communities and to fight for government policies at all levels that will better the lives of Black people.

Some African Americans plan to use the national recognition of Juneteenth  to encourage federal lawmakers and the Biden administration to strengthen the Voter Rights Act, and to pass the George Floyd Justice in Policing Act, named after the Black man in Minneapolis murdered by a police officer.

The Floyd legislation would establish a framework to prevent and remedy racial profiling by law enforcement at the federal, state, and local levels. It also limits the unnecessary use of force and restricts the use of no-knock warrants, chokeholds, and carotid holds. Biden, a Democrat, and most House and Senate Democrats back the legislation. Capitol Hill Republicans, however, have been resistant.

“We need justice in all areas of the system,” Hardman said of her hopes for progress. “It’s not just about going back. It’s about looking forward.”

authored by
First published at https%3A%2F%2Fwww.bridgedetroit.com%2Ffreedom-is-something-to-be-celebrated%2F