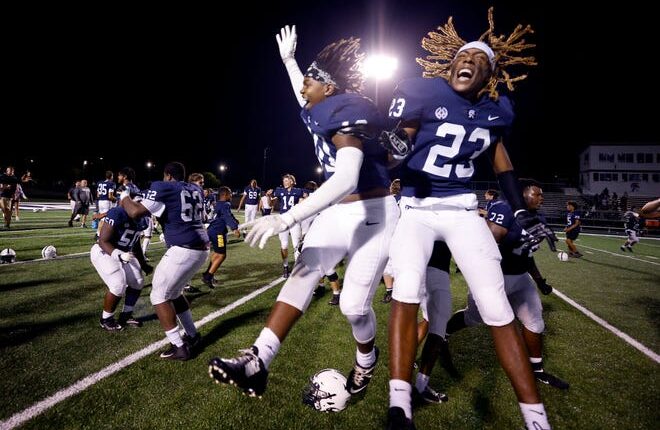 EAST LANSING − As the celebration took place on the brand new turf field at Lynn C. Adams Stadium on Friday night, the East Lansing football team gathered in front of a scoreboard and posed for a photo.

The Division 2 No. 4-ranked Trojans earned that moment with a 36-30 victory over CAAC Blue rival and Division 3 No. 3 DeWitt.

They struck on big plays offensively behind a steady performance from quarterback Dalen Adams, who hooked up with receivers Evan Boyd, Dorion Jackson and Charlie Baker for long scores.

And they bent plenty but didn’t always break defensively. They forced DeWitt to settle for field goals on three red-zone trips. And East Lansing held the Panthers scoreless in the second half, getting a key goal-line stop and a late interception with the game on the line.

All of that gave the Trojans a massive league win over a DeWitt program that suffered just its second league loss since joining the CAAC Blue.

“We watched the tape on them and did think there were things we could do if we executed,” East Lansing coach Bill Feraco said. “The execution on a couple plays was just perfect and they led to either a big gain or a touchdown.

“It speaks volumes for what happens when you pay attention and work hard in practice and get things together. We’re elated.”

East Lansing staked its claim as the best football team in Greater Lansing with the win. The Trojans are one of three programs in the entire CAAC that enters the middle week of the regular season unbeaten, joining CAAC Red co-leader Mason and CAAC White co-leader Charlotte.

And East Lansing is one of six unbeatens in Greater Lansing, joining Charlotte, Mason, Fowler, Corunna and Morrice.

While realizing how big Friday’s win was in putting the Trojans in a strong position in the CAAC Blue, Feraco knows his team has plenty of room to grow as it chases big goals.

“We’ve got our work cut out for us,” Feraco said. “We’re still a work in progress.”

But East Lansing is a work in progress with added confidence after seeing its preparations lead to a huge victory.