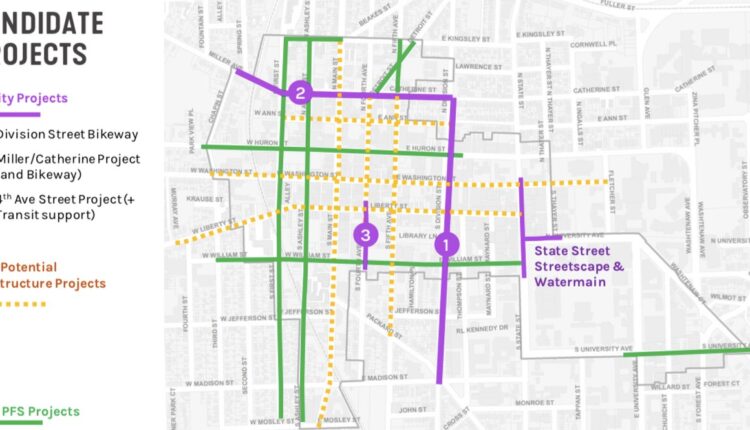 ANN ARBOR, MI – Ann Arbor’s Downtown Development Authority has committed $ 10 million to the next round of their People-Friendly Streets projects. Over $ 7 million is expected to be spent over the next two years.

Two upcoming projects of particular importance are on Miller Avenue / Catherine Street and Fourth Avenue, which coincides with the efforts of the Ann Arbor Housing Commission to develop affordable housing in urban public parking in the downtown area, said Maura Thomson, interim director of the DDA .

“We are coordinating the next round of People-Friendly Streets projects so that we can provide the Housing Commission with the infrastructure support it needs – such as improving water pipes and improving rainwater – while achieving other DDA and city goals,” said Thomson.

Some of the upcoming projects will add more bi-directional protected bike lanes in the city center, enhancing the experience for bus drivers outside of the Blake Transit Center, which the Housing Commission has plans for a high-rise housing estate on the old Y-Lot parking lot next to Fourth Alley.

A slide from the Ann Arbor Downtown Development Authority’s presentation to the City Council on March 22, 2021 mentioning plans to improve infrastructure in support of an affordable housing development adjacent to the Blake Transit Center.Ann Arbor DDA

Thomson gave an overview of the DDA’s planned projects at a city council working session this week and discussed how the DDA is coordinating with the Housing Commission and the Ann Arbor Area Transportation Authority.

The DDA’s People-Friendly Streets initiative is about improving access and making downtown streets safe and comfortable for all users, Thomson said.

In recent years, the DDA has spent millions making major infrastructure upgrades and beautifying downtown streets like Fifth Avenue, Detroit Street, South University Avenue, Huron Street, and William Street. Work on First and Ashley Streets is due to be completed this summer.

“As part of these projects, we are replacing critical infrastructure, but in a way that makes sense and emphasizes sustainability, safe access and creating more welcoming civic spaces,” said Thomson.

The DDA created the city’s first bi-directional cycle path on William Street in 2019 and another on First Street in 2020.

The closest bi-directional protected bike path is planned on Division Street from Packard to Catherine Street. That was a temporary pilot last year, and the DDA hopes to make it permanent with the installation of bollards in the fall.

Then the DDA plans to turn its attention to the Miller / Catherine Corridor and create a new protected bike path connecting the First Street bike path to the Kerrytown business district.

In addition to providing another link in the protected cycle path network and treating a high-accident corridor, the DDA has the opportunity to support the Housing Commission’s efforts to develop affordable housing in the Fourth and Catherine car park in Kerrytown, Thomson said.

The DDA’s work on Miller / Catherine is expected to take place in 2022 ahead of the Housing Commission project, Thomson said.

“But we are staying in close contact with the Housing Commission to monitor the timing,” she said.

After completing two new developments, the Ann Arbor Housing Commission looks to the next 11

Further road and transit improvements planned along Fourth Avenue will support the Housing Commission’s work to develop affordable housing on the Y-Lot, along with improvements to the streetscape to aid transit operations and make transit users safer and better Providing experience, said Thomson.

The DDA has budgeted capacity for this project for the next two years, but the timing has not yet been determined and the DDA will continue to work with the Housing Commission and AAATA once the project takes shape, Thomson said.

The DDA also plans to launch a project to improve State Street downtown in the spring of 2022.

The People-Friendly Streets initiative prioritizes access improvements for all users, whether they are walking, driving, taking the bus, riding a bike or sitting in a wheelchair, Thomson said.

“The goal is to make sure our roads are safe and comfortable, regardless of your age, skill level, or mode of transport,” said Thomson.

According to Domson’s presentation, the DDA wants to complete a cycle path network in the city center, improve the roads for transit, calm traffic and increase pedestrian space.

In developing the next round of People-Friendly Streets projects, the DDA recently held public engagement workshops.

“We’ve had a great dialogue with the community and we’re continuing that contact. We’re using paper surveys to reach out to members of the community who we couldn’t reach through virtual engagement,” said Thomson.

People-Friendly Streets projects are based on a number of values ​​that the DDA board approved last July. Some of these are safe and comfortable streets in the city center, fair and equitable access for all people, an affordable and inclusive community, a resilient and energy-responsible city center, a vibrant and flourishing economy and a networked community with streets as a citizen space.

“These values ​​are also in line with key city initiatives – building more affordable housing, carbon neutrality by 2030, and the goal of Vision Zero 2025,” said Thomson. “The pandemic has shown that we don’t want to rebuild the status quo. We want to build better. “

Ann Arbor’s 50th Hash Bash will be virtual, but a smoking protest is planned