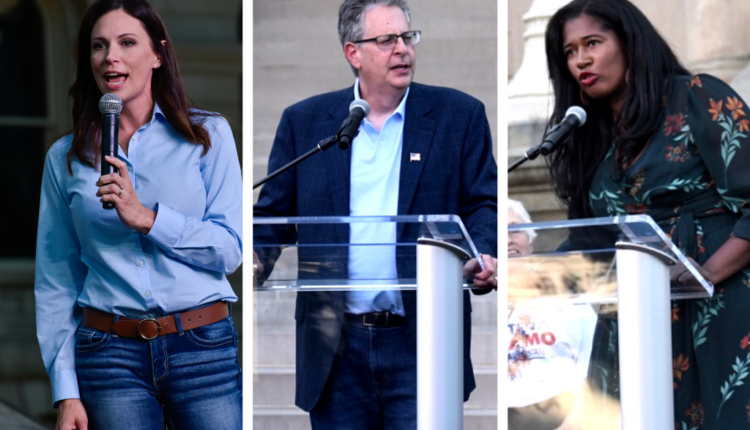 Dixon, DePerno and Karamo are ‘threats to democracy’ for 2020 election conspiracies ⋆

A new report says the top of the Michigan Republican ticket this November as the top threats to democracy statewide.

The analysis from the Washington, D.C.-based Defend Democracy Project, which is working in Michigan and seven other states, names GOP gubernatorial nominee Tudor Dixon, Secretary of State nominee Kristina Karamo and Attorney General nominee Matt DePerno for their statements and/or actions about the 2020 election that former President Donald Trump lost to President Joe Biden..

“These three individuals all took part in unprecedented attempts to overturn the will of American voters, but that is not all they have in common — Tudor Dixon, Matt DePerno, and Kristina Karamo continue to pose a grave danger to American democracy,” states the report. “Together with other MAGA Republicans, they are leading a scorched earth campaign to consolidate power over elections for decades to come, both in Michigan and across the country.”

On Nov. 8, Dixon faces Democratic Gov. Gretchen Whitmer; DePerno is up against Democratic Attorney General Dana Nessel and Karamo is running against Democratic Secretary of State Jocelyn Benson. The three Democrats have not questioned the results of the 2020 election.

The report details actions by all three candidates “in promoting conspiracy theories and lies about 2020, as well as working to make sure they have the final say in who gets to lead us, not Michiganders.”

Rebecca Parks is Defend Democracy Project’s research director and tells the it is definitely a concern that the top three candidates of a major political party are so forcefully projecting false theories as they advocate for restricting who can vote and when.

“The reality is that the people who are trying to dismantle free and fair elections in Michigan are at the top of the Republican ticket,” said Parks. “And I will say it does go beyond just the three that we identify in this report, By our count, there are 11 people on the ballot for either statewide elected office or for the House in Michigan this fall, who are some flavor of election conspiracy theorists, and that doesn’t even include getting into state legislative races where we know that Trump had a pretty heavy hand in the primary in terms of endorsing really extremist candidates, or county sheriffs (who) are also surprisingly a big source of election conspiracy theories. So, this goes all the way down the ticket. It’s not just the top.”

Spokespersons for the Dixon, DePerno and Karamo campaigns did not respond to requests for comment on the report.

For Dixon, the report says indications that she plans to manipulate future elections include support for a so-called “forensic audit” of the 2020 election, tighter voter ID laws and banning of absentee ballot drop boxes, while continuing to allege, without proof, that the 2020 election was stolen.

“Dixon took to Twitter multiple times in the months after the 2020 election to allege that the election was stolen and accuse Democrats of ‘obvious’ and ‘sloppy’ voter fraud – without evidence, and in spite of Michigan’s numerous audits,” stated the report.

As to DePerno, the Defend Democracy Project says he has “staked his campaign on false claims about vote-counting machines in Michigan’s 2020 election,” including baseless conspiracy theories that ballots in 2020 were tampered with by poll workers. The report further details DePerno’s promise to “prosecute the people who corrupted the 2020 election,” specifically naming Democratic Secretary of State Jocelyn Benson.

In addition, a lawsuit filed by DePerno in northern Michigan’s Antrim County following the 2020 election was cited by the Trump administration in its drafting of an executive order directing the Department of Defense and Department of Homeland Security to seize voting machines nationally.

Antrim County has been the subject of many right-wing conspiracy theories for briefly showing Joe Biden ahead of Trump after the 2020 election, an error that was quickly corrected. That lawsuit was later dismissed.

The report also notes that on Jan. 6, 2021, DePerno met with Trump administration officials to discuss overturning the election.

“While MAGA insurgents stormed the Capitol on Jan. 6, Matthew DePerno met with Department of State officials to discuss last-minute maneuvers to try to overturn Trump’s election loss,” stated the report. “DePerno admitted in a public survey, “On January 6, 2021, I was in the State Department briefing Mike Pompeo’s staff on how the election was stolen. NOTE to reader: don’t tell the Feds!” He reportedly held an important “behind-the-scenes role” in disseminating Trump’s baseless allegations that the election was stolen.”

DePerno is now the subject of a petition for a special prosecutor into whether third parties gained unauthorized access to, and then tampered with, election equipment and data after the 2020 election.

Finally, the report notes Karamo also falsely believes Trump won the 2020 election while falsely maintaining that those involved in the Jan. 6, 2021, insurrection were left-wing activists pretending to be Trump supporters.

In addition, Karamo was among those who attempted to use the court system to overturn the election, testifying to a Michigan Senate committee that while serving as a poll worker in 2020, she had witnessed “sacks of votes inexplicably had been dropped off there in the middle of Election Night” and that Dominion voting machines had flipped votes from Trump to Biden.

The Senate panel later issued a report finding no evidence of widespread fraud.

Amplifying the concerns laid out by the Defend Democracy Project has been the ramping up in August nationwide of more than just rhetoric by Trump-supporting GOP candidates. That was detailed in a separate report titled, “Democracy in Danger: Throughout August, MAGA Republicans Promoted Political Violence and Worked to Overturn the Will of Voters.”

“We started the month with revelations about the missing texts from Jan. 6 deleted by the Secret Service and Department of Homeland Security; by the end, Lindsey Graham was on TV threatening more violence if Trump is held accountable for his crimes,” stated the report. “With the FBI search and seizure of highly-sensitive documents at Mar-a-Lago, former President Trump and his supporters suggesting that he is above the law and directing violent attacks against the FBI, violent threats against our nation’s record keepers at the National Archives, election deniers winning contests for elected office, and subpoenas from the Fulton County grand jury investigation in Georgia, it was quite a month — and August isn’t over just yet.”

Parks noted that while August is normally known as a quiet political month, that was certainly not the case this year. That’s why the group wanted to put a spotlight on all of the activities that were threats to democracy, whether at the national level or in statewide races such as in Michigan.

And while there is the conventional notion that candidates espousing extreme positions will alienate many voters, she said it’s not something the group is willing to simply hope will be true.

“I think we have to keep making sure that we are shedding light on this and making sure that the public is aware that these are the people who are running for office this fall,” she said. “This is what they believe. And especially, as we’ve seen around the country, a lot of these candidates as they are heading towards the general election are trying now to kind of moderate some of their previous positions.”

“We’ve seen this a bunch with abortion, but also true of some of the election denial stuff. And even Kristina Karamo in Michigan tweeted earlier this month that President Trump won the 2020 election and will soon return to the White House. But then she deleted it and said her account was hacked. But of course she’s been saying that for months and months and months and just now that the spotlight of the general election is on her, she’s sort of attempting to go back and present herself as much more moderate. So I do think it’s really important that people keep shedding light on some of the just really extreme positions and things that these people would do if they were to hold office.”