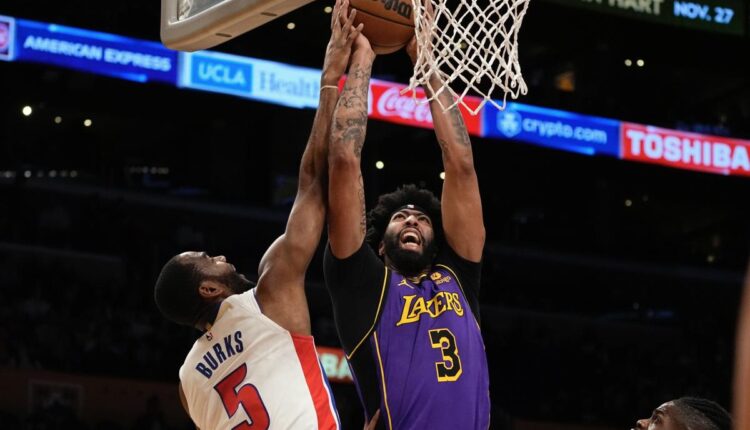 LOS ANGELES — A first quarter surge gave the Detroit Pistons an early lead over the Los Angeles Lakers on the road. But the Lakers ended up striking next — and taking permanent control of the game.

THEY LOVE LA?Pistons can build on quality defensive performance in loss to Clippers

BIG DREAMS:Duren, Bagley can stamp roles for rest of season & give Pistons a lot to consider

Anthony Davis, who finished with a game-high 38 points, gave Detroit’s center rotation fits. Davis scored 16 points in the fourth to help the Lakers close out their win. Marvin Bagley III, Jalen Duren and Nerlens Noel picked up seven total fouls in the first quarter trying to defend him. The Pistons were without Isaiah Stewart (right big toe sprain) and Cade Cunningham (left shin soreness), and the Lakers were without LeBron James (thigh).

Alec Burks led the Pistons with 23 points off the bench, Bojan Bogdanovic tallied 20 points, six assists and five rebounds and Killian Hayes had one of the better performances of his career with 18 points (a season high), nine assists (also a season high) and four made 3-pointers (a career high).

Hayes’ shooting — or lack thereof — has been a persistent narrative in the point guard’s third season. He’s a career 26.3% shooter beyond the arc and entered Friday shooting a career-low 22.9% from there this season. After spending significant time this offseason improving his shooting mechanics, he has yet to see it translate into games.

He and Burks (4-for-5 from 3) carried the Pistons in what was an underwhelming outside-shooting night for the rest of the roster. Hayes made three 3s in the first half — including one with 21 seconds left before halftime that cut the Lakers’ deficit to one. His final 3-pointer was a make from the corner off of a bounce pass from Burks near the end of the third period. 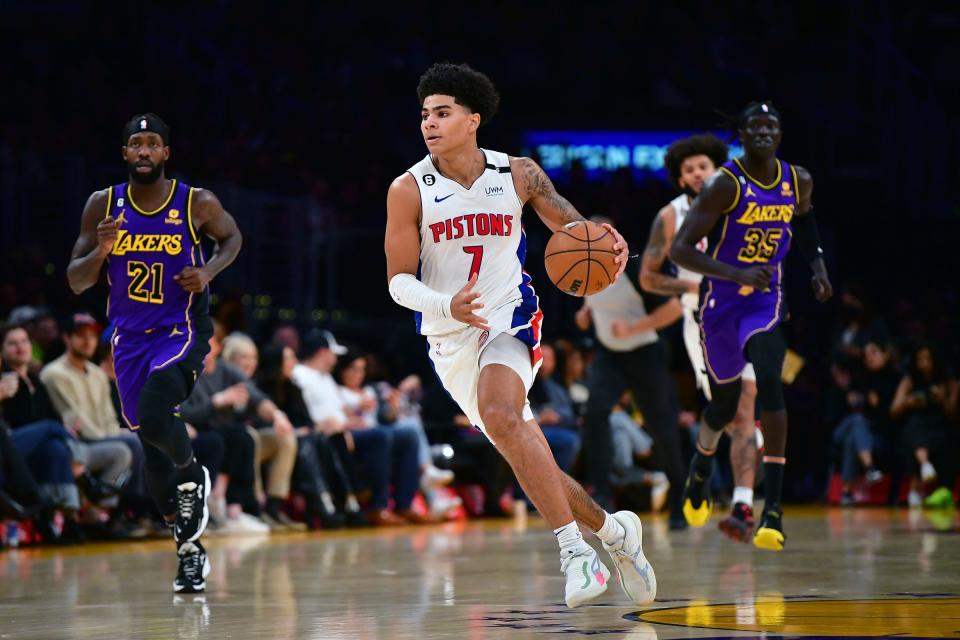 Detroit Pistons guard Killian Hayes (7) moves the ball against the Los Angeles Lakers during the first half at Crypto.com Arena in Los Angeles on Friday, Nov. 18, 2022.

Overall, it was Hayes’ best game of the season. Beyond setting season highs in points and assists, he helped hold Russell Westbrook to 4-for-12 shooting. His one blight was foul trouble, as he picked up two in the first quarter and fouled out with 2:28 remaining in the fourth.

Diallo brings energy off of bench

Hamidou Diallo arguably has the most unique role of any Piston. He’s a 6-foot-5 wing whose primary contributions on offense include tip-in layups, putback dunks and catching passes in the dunker spot. Per 100 possessions, he’s fifth on the roster in rebounding with 9.6, behind all four of Detroit’s big men. He’s a poor shooter, but the coaching staff doesn’t mind. Dwane Casey wants him to stick to his strengths.

Friday highlighted how valuable Diallo can be. He tied his season-high with 13 points and made five of six shots and three of five free throws. Along with Jaden Ivey, he’s good at consistently pressing the rim. Unlike Ivey, he’s better without the ball. That skill has allowed Casey to plug him into a variety of lineups, at multiple positions.

Entering the season, it appeared Diallo would be left out of Casey’s nightly rotation due to Detroit’s improved depth at the wing. Injuries have paved a consistent role for him, and he’s capitalizing offensively.

This article originally appeared on Detroit Free Press: Detroit Pistons no match for Anthony Davis, Lakers in in 128-121 loss