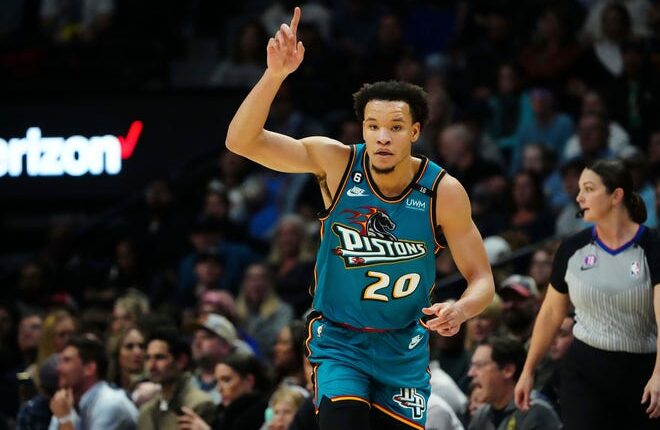 DENVER — The Denver Nuggets returned to full strength, right on time to host a Detroit Pistons team missing three of its five best players. It didn’t matter, as the Pistons overcame a big night from Nikola Jokic to pick up an upset win.

The shorthanded Pistons (4-15) defeated the Nuggets (10-7), 110-108, to snap a seven-game losing streak and get their first road win of the 2022-23 season. Jokic, after exiting health and safety protocols, tallied a near-triple double (26 points, 10 assists, eight rebounds) in his first game since Nov. 13, but the Pistons prevailed thanks to a balanced offensive effort.

OFF THE BENCH:Killian Hayes has benefitted from Pistons’ patience. Now it’s time to reward them

Bojan Bogdanovic (22 points, nine rebounds), Alec Burks (21 points), Kevin Knox II (17 points, seven rebounds) and Marvin Bagley III (14 points) all scored in double figures for Detroit. The Pistons built a game-high 13-point lead with 6:34 to play in the fourth quarter, but Denver rallied back with a 15-3 run. Jokic split a pair of free throws with 2:17 remaining to cut Detroit’s deficit to one, 104-103.

But Burks closed the win out for the Pistons, earning a trip to the line with 1:36 to play and hitting both free throws to give Detroit a three-point cushion. Aaron Gordon airballed a 3 on the other end, and Burks hit a midrange jumper to extend Detroit’s lead to five with 50.6 seconds left.

Sometimes, a change in expectations can help a player find his comfort level.

Knox joined the Pistons this offseason with zero expectations. The 2018 No. 9 overall pick fizzled with the team that drafted him, the New York Knicks. He was unable to find traction with the Atlanta Hawks after being moved at the 2022 trade deadline, shooting 35.6% in 111 minutes over 17 games.

He joined a Detroit team with solid depth at the wings. It wasn’t clear if he’d play major minutes this season, but the coaching staff only asked two things of him — hit shots, and defend. This week, he has looked the part of a capable role player.

Knox set a season high of 11 points Sunday, then followed that with a new high Tuesday. He ended the first quarter by tipping in a missed 3-pointer from Hamidou Diallo and got rolling in the second quarter, knocking down a 3 with 9:06 to play in the period and getting consecutive transition buckets — a dunk and layup — off of passes from Jaden Ivey.

With Bey potentially missing Detroit’s next two games with a sprained ankle, the Pistons have needed Knox’s contributions. His best stretch of the season has timed nicely with Detroit’s injury woes. Coach Dwane Casey rode the hot hand in the fourth quarter and allowed Knox to close out the game.

496 reopens in Lansing as construction pauses for winter