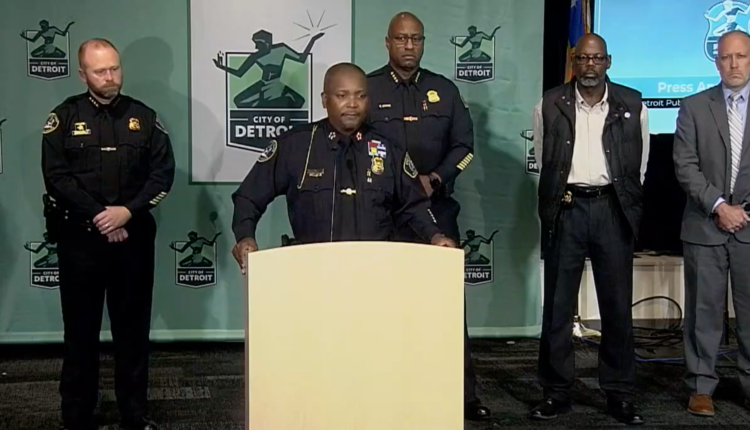 Two Detroit police officers and a supervisor are suspended following the fatal shooting of a woman experiencing a mental health crisis on Thursday.

Detroit Police Chief James White made the announcement Monday involving two officers who arrived at the scene after reviewing video footage of the police-involved shooting. White said one of the officers fired shots, while the other did not.

White said during a press conference that he will refer the matter to the Board of Police Commissioners – the civilian oversight board for the Detroit Police Department – for determination on whether the officers’ suspension should be unpaid.

“I will tell you it will be my recommendation that they are suspended without pay,” White told reporters on Monday.

Besides the supervisor who was suspended, another has been placed on administrative duty. Neither supervisor was directly involved in the shots that were fired, but White said he is recommending that one of the supervisors be demoted in rank.

“My expectation for those who wear stars and bars is that they take leadership and command. These positions are very important positions,” White said. “The responsibility is enormous. And we have to take command and control the situations and scenes.”

Officers arrived at the residence Thursday after receiving two 911 calls from a woman stating that her daughter, who was schizophrenic, was wielding a bat and knife and had struck the caller’s grandson, who was bleeding. The subject, who had been suffering from an apparent mental health episode, also had access to a weapon, White said. Shortly after arrival, five officers entered the home and three of them fired a total of four shots, White said on Friday.

White declined to say Monday what led to the suspensions, but told reporters that he has concerns about how quickly officers acted and whether they followed procedure to the best of their ability.

“I look at everything, and it’s so early in the investigation that I’ll have more findings when we’re done here,” he said. “But I’ve seen enough to give me pause and concern early on from what had been shared with me from Professional Standards to make the decision I’ve made.”

Detroit police have seen a rising wave of mental health related calls in recent weeks. The surge has led some, including White, to demand more resources be given to mental health treatment facilities in Detroit.

authored by
First published at https%3A%2F%2Fwww.bridgedetroit.com%2Fdetroit-officers-suspended-over-fatal-shooting-tied-to-mental-health-crisis%2F