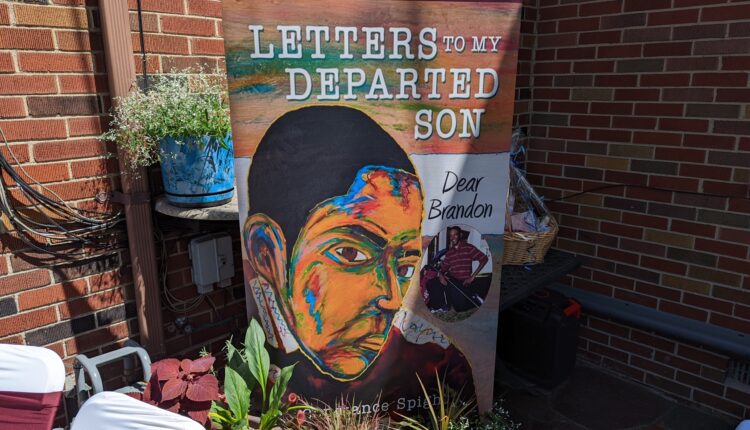 From the golf course to the neighborhood and the school hallways, Brandon Lee Spight made an impression on everyone who knew him.

But one afternoon in January 2007 classmates of the University of Detroit Jesuit High School and Academy senior noticed he wasn’t himself.

The 17-year-old had been complaining of frequent and debilitating headaches. It landed him in the dean’s office and eventually in an MRI machine. Days later, a neurologist diagnosed Brandon with a brain arteriovenous malformation (AVM), a rare condition similar to a tumor.

His parents, Constance “Connie” Spight and Virgil Spight Sr., spent almost every day talking with doctors about their son’s condition and treatment options.

About 1% of the general population has a brain AVM and, of those individuals, about 3% have “brain bleeds” – or a ruptured blood vessel in the brain, which can cause complications or death, according to the Nationals Institute of Neurological Disorders and Strokes.

Brandon’s family said he was among that 3%. Surgery was his best option, but it was risky. Doctors told the family the teen could end up with paralysis or long-lasting brain damage, and he turned the procedure down.

On Jan. 30, 2007, Spight was hospitalized at Royal Oak Beaumont. As the days went on, his mother said, Spight’s positivity diminished and doctors said his chances of survival fell to 10%.

“At first we had feelings of optimism that Brandon would get better,” said Spight, a retired Detroit police commander. “But as the days went on in the hospital, the reality set in that he wasn’t going to pull through.”

Spight died Feb. 11, 2007, just days before his eighteenth birthday and three months before he was set to graduate from high school.

“It’s hard to put words to what I was feeling and what my husband was feeling at the time because it was so sudden,” said Spight, now 70, who lives on the northwest side. “He was just here talking and laughing with his friends then a week later he was gone.

“You never really get over that kind of loss,” she said. “Even after all these years, I’m never going to get over it, I just have to heal the best I can.”

‘He was going to be famous’

For Spight, the path to healing began after family and friends grieved for more than a year. The Spights set up a nonprofit in their son’s name and family friend Karen Dumas inspired Connie Spight to write a book about Brandon and the experience of losing him.

“Brandon used to always tell everyone he was going to be famous one day,” Connie Spight told BridgeDetroit, “So I wanted to make sure the whole world got to know my son.”

The writing process proved difficult. Connie Spight said she wanted to start in 2008, but decided to first collect stories about Brandon from his classmates, fellow players on the high school’s golf team, and friends.

“I really just wanted to be reminded of that energy Brandon brought to everyone around him,” she said. “He was a talker for sure. I wanted to know what funny stories and quotes people had from their time with him.”

Spight said she began writing letters to and about Brandon in early 2009. The process was “very up and down,” her feelings often got “too heavy,” and she needed to take breaks.

“I probably started and stopped writing back and forth for a few years before I had anything I thought was good,” she said.

Spight tried using a ghostwriter and later worked with someone who knew her son and that she trusted more; former Detroit Free Press journalist Patricia Montemurri.

With a new supporting writer and more time to process how she felt, Spight restarted the book in 2016. She and Montemurri eventually finished between 2017 and 2018.

Constance “Connie” Spight wrote the book Dear Brandon: Letters to my Departed Son as a way to heal after the death of her son, Brandon Lee Spight. Spight on June 16, 2022, signs a copy of her book for Elaine Posten during a book signing in northwest Detroit. (BridgeDetroit photo by Bryce Huffman)

Spight’s book, Dear Brandon: Letters to my Departed Son, was published in February through Archway Publishing. It is a collection of letters and essays written by members of the Spight family, close friends and others who knew Brandon.

“Because he was gone so suddenly, it felt like a lot of people who knew him and understood who he was didn’t get the chance to say goodbye,” Spight said. “So this was a way for me and everyone else to just share some of their memories of Brandon and feel whatever it is they are feeling.”

‘A smart kid, who pushed back’

Connie Spight held a book signing Saturday at her home in northwest Detroit. Family, friends, and Brandon’s former classmates filled the backyard with smiles, tears, laughter and stories about the kid who often walked through the neighborhood laughing loudly.

Brandon’s oldest brother, Virgil Spight Jr., 59, said life for him, his family and his friends has never been the same since his little brother died.

“I mean how could anything be the same after that,” the eldest Spight son said.

“You really don’t know what to think when someone loses their child,” Arrington said, “especially at such a young age.”

Jackson said many of Brandon’s classmates learned of his 2007 death hours before the announcement rang through the halls of his Catholic school during homeroom.

“I don’t remember there being any real words said or statements from us,” he said. “Some of us shed tears, but we were mostly just in shock.”

During the Saturday book signing, Jackson remembered Brandon as a smart kid who pushed back against social norms and rules that he didn’t understand or agree with.

“If I could say anything to Brandon, it would just be ‘thanks’ because he was always pushing me and the other guys in (the class of 2007) to think for ourselves and challenge the status quo,” Jackson said. “A lot of the discourse about race and systemic racism that we’re having now are things Brandon was pushing back and rebelling against in 2005 and 2006.”

Jonathan Kirkland, another classmate of Brandon’s from U of D Jesuit, said he and Brandon often talked about going to Morehouse College together and becoming attorneys.

“There were a lot of nights in undergrad and even in law school where I wanted to give up or take a break and something propelled me through,” Kirkland said. “I like to think it was my old study partner Brandon looking out for me.”

All proceeds from the book are being donated to the Brandon Lee Spight Memorial Foundation, a nonprofit that since 2007 has provided a handful of young men scholarships to attend U of D Jesuit. The first scholarship recipient, Logan Pratt, wasn’t able to attend the book signing, but his mother was.

“We met the Spight family through U of D,” Pratt’s mother, Elaine Posten said, “and actually they were the ones who allowed Logan to continue going to U of D because I didn’t have enough money to send him there. They paid for his education the entire way through from 7th grade to 12th.”

Posten said without the generosity of the Spight family and the foundation, her son wouldn’t be where he is today, working for a financial management software company in Washington D.C.

“Logan graduated from the University of Michigan after he made it through U of D, and I know he wouldn’t have ever had that opportunity, if not for the Spight family,” she said. “So I’m here to just say thank you to them for making my son who he is.”

Learn about the foundation, the book, and Brandon’s life here.

Donations to the foundation can be sent to:

Editor’s note: Bryce Huffman grew up in the University District, a block away from Brandon Spight and his family. Bryce’s older brother, Eric Huffman II, was in Brandon Spight’s graduating class.

authored by
First published at https%3A%2F%2Fwww.bridgedetroit.com%2Fdetroit-mother-heals-through-stories-of-departed-son%2F

Did You Know This Cool Looking Water Park in Ypsilanti Existed?