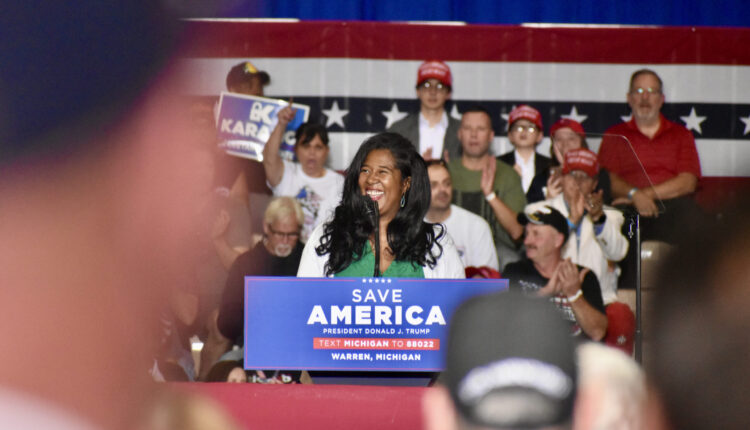 The midterm elections this month brought widespread failure to election deniers on the ballot. The most toxic of these dishonest Republicans all went down in stinging losses. Losers included:

The disaster Republicans endured led many observers to conclude that election denialism cost them far more than was anticipated and that voters had demanded a return to some “normal” democratic expectations.

While this might be mostly true, there remain significant pockets of democracy haters throughout the country who, far from being chastened by the humiliating midterm results, are hardened in their antipathy to constitutional order.

Many of them have rallied around Lake. She lost a close race to Democrat Katie Hobbs, but not only had she not conceded as of this writing but she suggested the race was compromised by fraud. High-profile election deniers across the country, including Steve Bannon and Michael Flynn, both of whom served in the administration of the coup-plotting former President Donald Trump, challenged the veracity of the Arizona results.

“We join the people of Arizona in calling for new, legitimate midterm elections — not just in Arizona, but across the country,” he wrote on Telegram.

National election denial figures are making post-midterm appearances in Colorado. On Sunday, Douglas Frank, a high school math teacher from Ohio who’s been instrumental in spreading election lies around the country and whose phone was seized by the FBI, appeared in Holyoke for an event presented by the Phillips County Election Integrity Project to discuss the “issues with our election systems.”

On Facebook, he posted a chart from Phillips County, along with charts from other Colorado counties, purporting to show an election “coverup.”

There’s potentially worse to come. Radio personality and election denier Eric Metaxas attended Trump’s event at Mar-a-Lago Tuesday, when Trump announced he’s running for president again, and was interviewed by RSBN about what he said were stolen midterm elections amid “a spiritual war between good and evil.”

“I mean, look, this happens in human history,” he said. “You need, you know, wild people, fighters to say, ‘We’ve got to deal with this. This is not OK.’”

Metaxas is taking his message next to Colorado. He’s scheduled to appear today at Brave Church in Englewood and Friday as the featured attraction during an event at Timberline Church in Fort Collins.

Then there is Trump himself. The progenitor of the big lie. The criminal who as a sitting president inspired a violent insurrection and schemed the theft of American presidential power. The embodiment of corruption, bigotry and dishonesty. On Nov. 8 Trump saw so many of his cult-member office seekers repudiated at the polls but chose a week later to announce a third run for president. This has led some commentators to see him as weak and predict the ascension of a successor, Republican Florida Gov. Ron DeSantis.

But it’s foolhardy to underestimate Trump.

“I’m skeptical of the idea that Trump’s moment in the spotlight is passing or in decline just because some of his endorsed candidates didn’t perform as well as expected in the midterms,” Charlotte Hill, director of the Democracy Policy Initiative at Berkeley’s Goldman School of Public Policy, said in Berkeley News. “Trump really has positioned himself as the strongman authoritarian figure … so that can make it hard to draw too many conclusions about his viability as a political leader from the performance of his preferred candidates.”

The New York Times determined that almost 200 Republican election skeptics and deniers who ran for congressional seats and top state offices won. These include extremists like incumbent Rep. Marjorie Taylor Greene of Georgia and newcomer Sen.-elect J.D. Vance of Ohio.

It could also include Rep. Lauren Boebert of Colorado, one of the nation’s most clownishly Trumpian lawmakers, whose contest to keep her seat is still too close to call but trending her way.

Most people anticipated a “red wave” election, where Republicans would win a commanding majority in the U.S. House, perhaps a majority in the Senate, and significantly advance their influence in state offices around the country. It didn’t go down that way, and in fact in places like Colorado, Democrats made remarkable gains.

But it would be a mistake to treat Trump and his MAGA horde as beaten. Rebuked and feeling “wild,” they could be more dangerous now than they ever were.