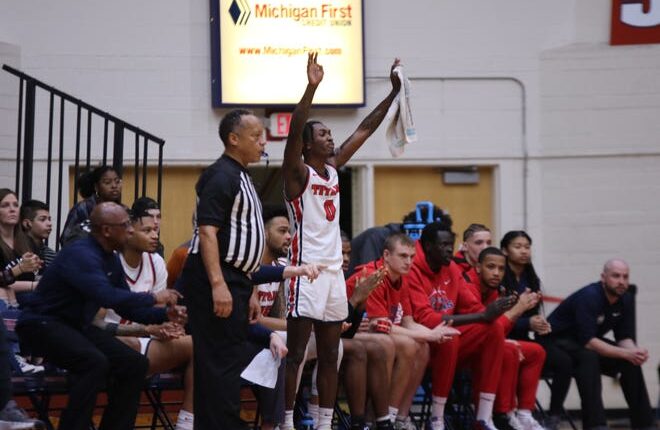 Antoine Davis seriously considered transferring to a Power 5 school for his final year of college basketball. But in the end, he decided he didn’t want to set all these records anywhere but at Detroit Mercy.

On Saturday afternoon, Davis, the fifth-year guard for the Titans, took his place atop college basketball’s all-time 3-point leader board, making 11 in Detroit Mercy’s 87-75 victory over Robert Morris at Calihan Hall.

Davis made eight 3-pointers in a scorching first half to take the throne, first passing no. 2 Travis Bader (504), the former Oakland sharpshooter, and then passing the previous 3-point king, Fletcher Magee (509) of Wofford.

“It means everything, another record for the history books, another blessing, I’m just so thankful for it,” Davis said following the win. “To be honest, I wasn’t thinking about it. I was just playing. But once I hit probably five, six in a row, I was thinking I was probably going to get it.”

Davis, 24, finished with a season-high 41 points, which also moved him into the top three all-time in college basketball scoring.

Next up is no. 2, currently held by Portland State’s Freeman Williams, at 3,249. That in all likelihood will come in Detroit Mercy’s next game, next Saturday at IUPUI. If not then, it will come at home Jan. 23, against Oakland.

“It’s something special,” said Davis, who was 15-for-26 shooting, 11-for-18 on 3-pointers in Saturday’s victory, adding three assists and six rebounds. “I wasn’t even thinking about it.

The No. 2 spot on the scoring list likely will be Davis’ ceiling. Almost certainly out of reach is No. 1, “Pistol” Pete Marovich, the LSU legend who scored 3,667 points.

Perhaps a bigger deal to Davis, who last year became Detroit Mercy’s all-time scoring king, than the record he set Saturday was the win his Titans got. Detroit Mercy had lost seven of eight. Detroit Mercy (7-12, 3-5 Horizon League) also got 15 points from Gerald Liddell, who returned this week after missing last week’s two road games with a bad back.

Detroit Mercy has had a hard time getting all its players on the floor in the same game, making Saturday’s stop-the-bleeding victory so critical for the Titans, who remain in the mix of a balanced Horizon League. They’re just a game behind Oakland (7-12, 5-3), which fell Saturday at home, 85-69, to a red-hot Youngstown State.

“I mean, with everybody that we have out right now, it was a great way to finish the game,” said Davis, attributing the late-game push in Thursday’s loss to Youngstown State to getting the Titans back on track.

“We brought that same energy in here today.”