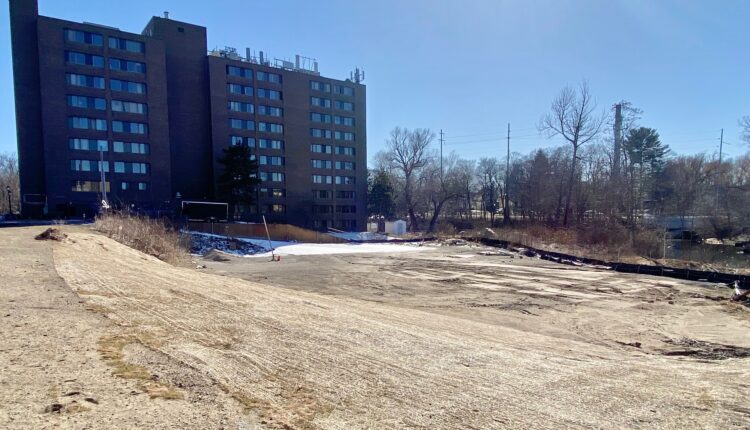 Traverse City agents on Monday will consider sponsoring a new type of tax break for a proposed housing development in downtown Traverse City, as well as redesigning and widening a section of the Riverwalk along the Boardman River. Both points were also discussed by the board of the Traverse City Downtown Development Authority (DDA) on Friday, with members weighing these and other proposals for the inner city.

Neighborhood corporate zone
With the support of the city commission, the first neighborhood business zone (NEZ) could be set up in downtown Traverse City.

Real estate company Great Lakes Capital is hoping to build an apartment complex with 91 units on open land at 309 West Front Street on the Boardman River next to the new 4Front Credit Union headquarters (see illustration). Jean Derenzy, CEO of DDA, presented the board members with the idea of ​​creating an NEZ around the site or a defined zone in which property tax exemptions would be granted in exchange for developers building or renovating residential buildings.

According to the rules of the NEZ, each individual owner within the zone must apply for tax exemption if interested. It is not automatically granted to the owners and only applies to the part of the residential development, not to the property or commercial components. Great Lakes Capital could get up to 15 years of tax exemption in exchange for building year-round rental apartments, with 12 of the 91 apartments – or 14 percent – capped at 80 percent of the Area Median Income (AMI) level. This equates to an income level of $ 45,400 for a single person household or a rental maximum of $ 1,135 per month. Great Lakes Capital would be tied to income requirements for the duration of the tax break and would not be able to raise rental rates or move to market rates. The agreement also prohibits the developer from converting units into condominiums.

“Bringing mixed-income rental apartments and housing for workers to the city center all year round is in line with the goals of the DDA and the city and is an important element in maintaining an active and lively city center,” Derenzy wrote in a memo about the project. She added that “the tax incentive will encourage this future development and will remain a high-density rental housing estate in a mixed-use building for a decade or more.”

Some DDA board members expressed skepticism about the NEZ program on Friday. Mayor Jim Carruthers said $ 1,135 for a one-bedroom apartment is not low enough to address the city’s housing shortage. “I just don’t hear any young professionals or people in this community claiming this is affordable for housing,” he said. He also noted that the original intent of the NEZ program was to incentivize housing in needy areas, saying, “I don’t think I would consider Traverse City a needy community.” DDA board member T. Michael Jackson asked why another development group, Innovo, could plan two apartment complexes (the completed breakwater building and a new Hall Street project approved by city planners this week) downtown with similar sized units and rental prices without the help of tax breaks, but Great Lakes Capital couldn’t. “For me, this is a developer’s dream to get a tax break on this spot,” he said.

Derenzy noted that there are no rental price restrictions imposed on private market price developments such as those monitored by Innovo, while Great Lakes Capital would be tied to income-related interest rates for the duration of its NEZ agreement. Responding to Carruther’s comments on the purpose of the NEZ program, Derenzy said the riverside property at 309 West Front Street was indeed a distressed place. “You have contamination,” she said. “It’s a wasteland.” Board member Scott Hardy said the city’s requiring private developers to provide affordable downtown housing on one of the city’s most expensive lots is inadequate and also unrealistic without some sort of subsidy or public-private partnership “like the NEZ or control programs ”. Derenzy will collect feedback from the city commission on the NEZ proposal on Monday before deciding on the next steps.

Great Lakes Capital had previously planned a sister mixed-use project for 309 West Front Street across the street at 124 West Front Street, the current “hole in the ground” next to J&S Hamburg. Derenzy told The Ticker Friday that Great Lakes Capital has since lapsed the option to purchase this property and is no longer pursuing any development there. The 1.25 acre property is being offered for sale with Three West LLC for $ 3.75 million.

Riverwalk redesign
A large tree that fell within a downtown river bank allows city officials to widen and realign a section of the Boardman River Riverwalk that is already in need of repair.

The Uptown Riverwalk between Union Street Bridge and Uptown Development was earmarked for reconstruction after several components of the original building did not meet ADA (Americans with Disabilities Act) standards. This led the DDA to draft a settlement agreement with the contractors involved and finalize a plan to correct the work. Repair work on the Riverwalk began on March 15th and is expected to be completed by the week of May 2nd.

After a tree fell on the riverbank, employees recommended using the time to “realign and widen the path in this area to make it safer,” said Derenzy. “There are cost savings in realigning this section versus correcting the course of the river at a later date.” The DDA board members on Friday approved the payment of an additional $ 21,560 from the DDA’s TIF 97 fund to cover the realignment work. City commissioners asked for final approval of the spending on Monday.

> The board members of the DDA agreed to create a new liaison office for youth students on the board. The non-voting role was recommended by Liam Dreyer, the newcomer to Charlevoix High School, who runs a nonprofit called Government for Tomorrow that aims to improve students’ voices on government bodies. “The fraternity provides the DDA with an opportunity to get youthful views on our vision, future projects and placemaking activities – something the DDA has struggled with for years,” said Derenzy.

> After the board members had experimented with holding DDA board meetings at 10 a.m. in the past few years at 8 a.m., they agreed on Friday to change the meeting time again to 8:30 a.m. The move was proposed as a compromise to prevent meetings from taking place after noon while accommodating younger board members who had difficulty with the 8am start time due to school-age children and / or late-night business.