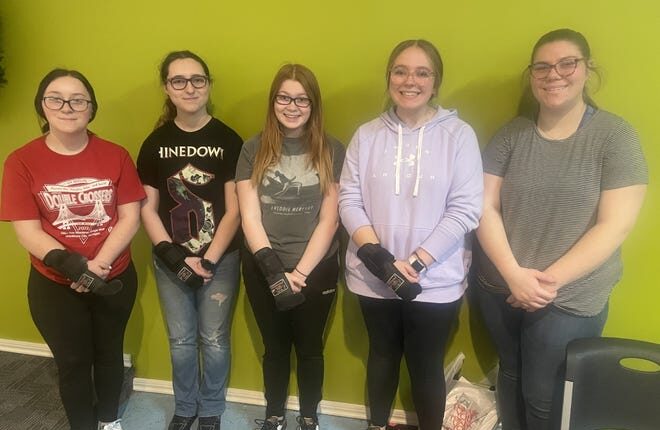 CHEBOYGAN – Hosting a meet for the first time all season, the Cheboygan High School bowling teams both stayed unbeaten in the Northern Michigan Bowling Conference by picking up two victories apiece at Spare Time Lanes on Saturday, Jan. 21.

The Cheboygan girls (7-0) rolled to a 28-1 victory over Grayling then captured a 30-0 triumph over St. Ignace.

MANCELONA – It was a busy weekend for the Pellston wrestling team, which competed at the six-team Mancelona tournament on Saturday, Jan. 21.

In their opening match, the Hornets suffered a 36-30 loss to the host Ironmen. Pellston wrestlers picking up wins were Hunter Sonnenberg (132 pounds), Kenny Crawford (144), Waasmowin Craven, Will Kline (165) and Aiden Klungle (215).

During their second match of the day, the Hornets fell short in a 36-21 loss to Cheboygan. At 138 pounds, Trevor Waller earned a pinfall victory, while Kenny Crawford (150) beat Cheboygan’s DJ Wichlacz by pinfall, Craven earned a 14-7 decision win over Cheboygan’s Evan Blaskowski at 157, and Will Kline pinned Cheboygan’s Hayden LaPointe in a 175- pounds bout.

In a 60-18 loss to Tri County, Colin Philips (126), Kline and Klungle earned pinfall victories in their respective weight classes.

In the final match of their tournament, the Hornets captured a 60-18 victory over Benzie Central. Wins from the Hornets came from Crawford, Kline and Klungle, who all prevailed by pinfall.

Wrestling in Newberry on Wednesday, Jan 18, the Hornets earned a 30-18 victory over Rudyard in their opening match. Securing victories for the Hornets were Crawford, Craven, Kline, Klungle and Sonnenberg.

However, Pellston did suffer a 42-21 defeat to Cheboygan in its last match of the night. Leading the Hornets with victories were Craven, Kline, Sonnenberg and Crawford.