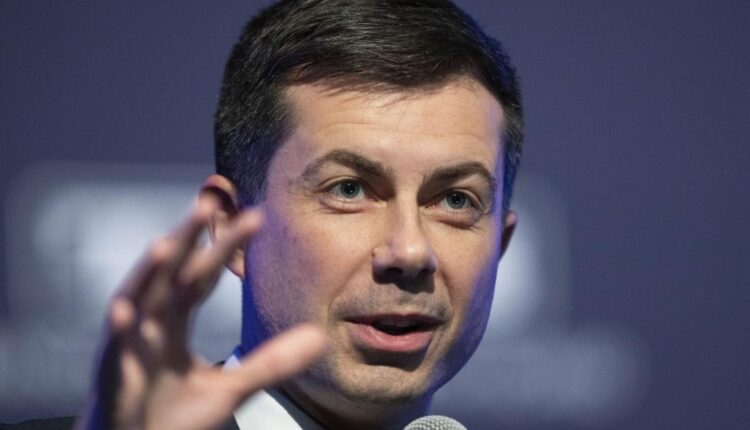 Buttigieg finds himself in the spotlight for better or worse | Ap

WASHINGTON (AP) — The nation’s transportation secretary usually holds one of the most public-facing roles in any presidential administration. A core aspect of the cabinet job is to travel the country, doling out millions of public dollars and attending ribbon-cutting ceremonies for new bridges and overpasses and ports.

Even by those standards, Pete Buttigieg has spent an inordinate amount of time in the national spotlight delivering the largesse of the big infrastructure and domestic spending bills. But at the same time, the 2020 Democratic presidential candidate and one-time mayor of South Bend, Indiana, also has been the public face of a string of transportation-related crises, all amid steady speculation about his future political prospects.

During the 40-year-old Buttigieg’s tenure, there have been widespread global supply chain issues and logjams at major ports, multiple instances of mass flight cancellations by airlines and a narrowly avoided nationwide strike by railroad workers that was only averted by an eleventh-hour intervention from Congress.

The latest transportation mishap was the most high-profile yet.

On Wednesday morning, a malfunction in an obscure and apparently obsolete internal system called the Notice to Air Missions, or NOTAM, forced the temporary grounding of all air traffic in the United States. The move touched off a cascading snarl that resulted in the cancellation of more than 1,300 flights and the delay of 9,000 more. It was the biggest shutdown of US aviation since the attacks of Sept 11, 2011.

Faced with a historic system failure, Buttigieg appeared to lean into his role as the face of the beleaguered American transportation network.

Appearing Wednesday at a Transportation Research Board conference, Buttigieg jumped right into the airline debacle before anyone could ask.

He called it “another challenging day for US aviation” and said his department was “now pivoting to understanding the cause of the issue.”

Earlier that day, during an interview with CNN, Buttigieg offered a positive spin, saying that “part of what you saw this morning was an act of caution.”

But he also acknowledged that the mishap had exposed a desperate need to modernize crucial and antiquated systems.

“We need to design a system that does not have these kinds of vulnerabilities,” he said.

Buttigieg’s challenges earn a special kind of sympathy from those who have sat in the same seat.

Ray LaHood, a former Republican congressman from Illinois who served as transportation secretary for four years under President Barack Obama, said he met with Buttigieg for 90 minutes shortly after Buttigieg was nominated by President Joe Biden.

“I told him, ‘When you walk in the door and turn the lights on, there’s going to be a crisis. And every day there’ll be one or more,’ ” LaHood said. “When something goes wrong, you become the face of it.”

In his two years on the job, Buttigieg has repeatedly criticized US airlines for chronic cancellations and shoddy customer service — making Wednesday’s debacle particularly awkward. It also highlighted the fact that the Federal Aviation Administration has been without a Senate-confirmed leader for nearly a year.

Stephen Dickson, a former Delta Airlines executive and appointee of President Donald Trump, resigned last March, midway through his five-year term. Biden’s nominee, Denver International Airport CEO Phillip Washington, has apparently stalled in the Senate, despite Democratic control of the chamber, over questions about Washington’s qualifications and his involvement in a corruption investigation in California.

Similarly, another major part of Buttigieg’s department, the National Highway Traffic Safety Administration, has been without a Senate-confirmed leader since last fall, when Steven Cliff resigned just three months after his confirmation to run the California Air Resources Board.

Robert Mann, an independent aviation industry consultant and former executive at American and Pan Am, said the vulnerabilities highlighted by the transportation issues far predate Buttigieg’s tenure and run deep into the institutional fabric of the his department and many other large government agencies.

“We’ve had pipeline problems, we’ve had maritime problems. How much does the secretary actually control? None,” Mann said. “Same with his predecessors as well.”

But Republican politicians have been quick to pile on Buttigieg, perhaps seeking to damage the prospects of a young Democratic star who has already run for president once.

In the wake of the mass flight groundings, Texas Republican Sen. Ted Cruz — himself a former and potential future presidential candidate — led the public charge.

“The FAA’s inability to keep an important safety system up and running is completely unacceptable and just the latest example of dysfunction within the Department of Transportation,” said Cruz, one of 13 senators who voted against confirming Buttigieg. “This incident also highlights why the public needs a competent, proven leader with substantive aviation experience leading the FAA.”

Cruz is expected to assume the role of the top Republican on the Senate Commerce, Science and Transportation Committee, which has jurisdiction over aviation.

Rep. Sam Graves, the new chairman of the House Transportation and Infrastructure Committee, said he expected a “prompt update on DOT’s efforts to do right by the passengers it has wronged” and a full accounting of what happened.

“The FAA does not run on autopilot – it needs skilled, dedicated, and permanent leadership in positions across the agency,” Graves, R-Mo., said in a statement. “The Biden Administration seems to think this lack of qualified leadership can go on indefinitely.”

LaHood, a Republican who served in a Democratic administration, said he met with Buttigieg again after last year’s midterm elections when it became clear Republicans would control the House.

LaHood’s message: “Get ready because you are going to have a target on your back. … You’re a high-visibility Democrat who ran for president. When things happen, be prepared for Republicans to take potshots at you.”

Last year, Buttgieg moved from Indiana to Traverse City, Michigan, hometown of his husband Chasten. Buttigieg said at the time it was primarily to be closer to Chasten’s parents, who were helping to care for the couple’s two young children. But the move to a longtime Democratic stronghold fueled speculation that Buttigieg was priming for his next campaign.

When Sen. Debbie Stabenow, D-Mich., recently announced that she would not run for reelection, there was buzz that Buttigieg might run. But he was quick to knock down the speculation. He said he was “fully focused” on his cabinet post and was “not seeking any other job.”

The trials and tribulations of his current assignment have reached the point where White House press secretary Karine Jean-Pierre had to address questions on Wednesday about Biden’s confidence in Buttigieg’s performance.

Biden, she said, “respects the secretary and the work he has been doing.”

Associated Press writers David Koenig in Dallas and Tom Krisher in Detroit contributed to this report.