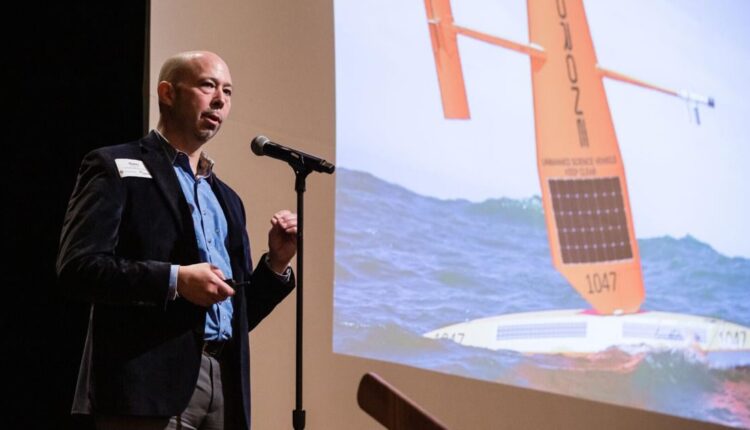 TRAVERSE CITY — For its first foray, TCNewTech certainly made a big splash.

The first Blue-Tech night dedicated to water innovations on Nov. 1 was a success, according to organizers of the event. Six presentations of startup companies and research project pitches as well as several updates from previous pitch contestants drove the first TCNewTech event focused on “blue economy or water innovation” to new depths.

TCNewTech partnered with other organizations like M-Tec, 20Fathoms, Northwestern Michigan College, Traverse Connect and the Water Innovation Labs for the inaugural event.

“We are excited to see such a great turnout, both in person, and online,” TCNewTech Event, Sales, and Marketing Director Chris Nesbit said in an email. “This event is a strategically important one. Blue-tech and blue economy are going to become an increasingly important focus for the area both economically and developmentally. We are doing our part to support the new focus.”

Six companies or research projects made their pitches for the $500 cash prize, provided in November by Hagerty. Normally five technology-based startups or entrepreneurs make their pitch to a hybrid audience.

In the end, “Lakebed 2030 — Mapping the Great Lakes” took home the title in what Nesbit said was “one of the most competitive voting rounds that TCNewTech has experienced this year.”

“After almost 10 minutes of voting, three of the contestants were in a dead heat race to win,” Nesbit said in the release. “Ultimately, the winner was decided by one vote, breaking the three-way tie.”

Lakebed 2030 is a partnership between NMC and several additional companies and organizations with the objective to map the lakebed of the Great Lakes by 2030. Hans VanSumeren, Great Lakes Water Studies Institute Director, said currently between 7-10% of the lakebed has been mapped .

During his presentation, VanSumeren said Lakebed 2030 is working with world leaders in aquatic data collection like Saildrone and Terradepth, Inc. on the project. During his pitch, VanSumeren “outlined the commercial value and the challenges of the project along with an in-depth review of the current status,” according to a release from TCNewTech.

Other pitches at the Nov. 1 event included:

The Blue-Tech event also featured some updates from previous TCNewTech winners including OLA Filter, which won TCNewTech in July 2021.

OLA is working with another Traverse City company, Hacha Products, which is the authorized distributor for OLA filters. The company recently became part of the Federal Emergency Management Agency disaster relief as well as the Global Empowerment Mission (GEM) in Florida.

Hacha Products owner and CEO Kimberly Meek and OLA Filter co-founder and Chief Technical Officer Theresa Smith provided an update on the company. OLA uses a filter cartridge that attaches by a universal thread to a faucet to produce pure drinking water while preventing water-born diseases.

During the public announcement portion of the Nov. 1 event, two-time TCNewTech contestant and winner ActionGlow announced it will appear on the Nov. 18 episode of “Shark Tank.” AfterGlow is an aftermarket LED lighting system. Typically affixed to sports equipment like surfboards, snowboards and SUPs, ActionGlow has also covered a school bus with a mural to turn it into an action sports tour bus.

“The two updates which we received from previous winners … illustrate that TCNewTech is playing an important role with these startups,” Nesbit said in an email.

To apply for a future Pitch Night event, visit https://tcnewtech.org/pitch/ or email Nesbit at [email protected]