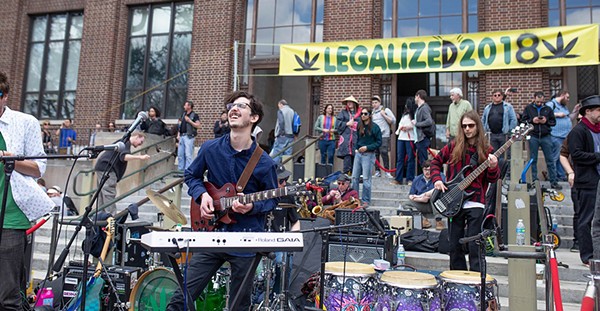 The Hash Bash – Ann Arbor’s annual celebration of all things of the weed – is again being canceled in physical form, but that doesn’t stop organizers from running a 50th anniversary event.

Other guests include John Sinclair, guitarist Laith Al-Saadi (who usually plays the Jimi Hendrix-style national anthem), musician Tom Wall and drag queen Laganja Estranja. There will also be many speakers from activists from members of drug policy organizations.

As last year, this year’s event will be digitized due to the ongoing pandemic. Organizers say it’s especially important to stop the event – traditionally at the University of Michigan Diag, where previous events have openly shared joints while law enforcement turned a blind eye – because of the highly contagious coronavirus mutation that has been discovered not to be held in cases connected with the campus.

“In the interests of public safety, we saw it as our duty to do all we can to promote digital production that meets the needs of the community and continues to build, activate, protest and maintain traditional events in line with education,” said event organizer Nick Zettell in a statement. “We can’t wait until we can all gather on Diag next year to safely and safely continue this wonderful tradition.”

Founded in 1972, Hash Bash was originally a celebration in response to a March 9, 1972 ruling by the Michigan Supreme Court ruling unconstitutional conviction of activist John Sinclair for possession of two marijuana joints.

Both the Democratically controlled US House and Senate have taken important steps to legalize marijuana at the federal level. In December, the House passed the Marijuana Opportunity, Reinvestment and Expungement (MORE) Act, the first cannabis legalization bill to ever make it onto the floor of Congress. Democratic Senate leaders have also announced that they intend to legislate soon. President Joe Biden has also indicated his support for the decriminalization of Pot.

“Hash Bash is campaigning for the legalization of cannabis by the federal government and for giving cannabis users and patients a voice,” said a statement by Sarfoh. “We are excited to continue this tradition with a new and innovative format that our attendees can feel safe in. We have been giving cannabis users a voice and an incredible afternoon of entertainment for decades.”

As usual, this year’s event is scheduled to start on Saturday, April 3rd at 12:00 noon.

This year’s event will also help raise funds for the John Sinclair Foundation and the Michigan Cannabis Prisoner Freedom Fund.

It’s a new era for marijuana in Michigan. Sign up for our weekly weed newsletter, which is delivered every Tuesday at 4:20 p.m.