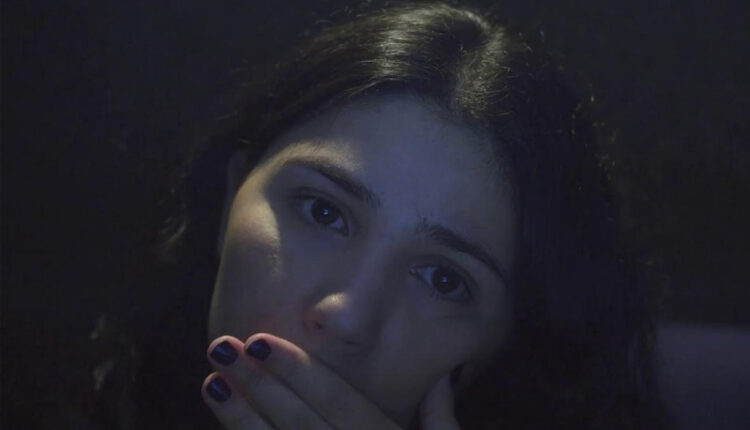 Ra’anan Alexandrowicz ‘(“The Law in These Parts”) “The Viewing Booth” is perhaps the most stimulating and perspective-changing documentary I’ve ever seen. A two-themed film, the Israeli occupation of Palestine and an analysis of documentary filmmaking itself, “The Viewing Booth,” is thoughtful and self-critical as it examines the way we observe.

In short, the viewer of the film is watching the viewer. A young woman, Maia Levy, enters a booth and sits in front of a computer screen and camera. Forty YouTube videos were pre-selected by the filmmaker: half represent the perspective of the Palestinians living under occupation, the other half show the viewpoints of the Israeli settlers and soldiers. Levy watches this at her own pace and is asked to speak her thoughts out loud as she reacts to the footage.

Levy is familiar with the Israeli-Palestinian conflict: her parents are Israelis and she recently traveled to Hebron. She knows the human rights group B’Tselem, which has produced or uploaded many videos from a Palestinian perspective, and has already seen a few clips. As she clicks from video to video and occasionally pauses to reflect and respond, the viewer watches as her face is illuminated by the blue glow of a screen.

On one level this film is about the Israeli-Palestinian conflict. Despite Levy’s steady liberation from skepticism (there’s a lot of talk about events being “staged” – both clips of altruism and Israeli military brutality are labeled), she makes her own convictions clear: Israel acts morally, and there must be one Be a justification for this mistreatment of Palestinians.

Her honesty is surprising and her occasional racist comment is embarrassing: “You lie a lot,” she says, referring to Arabs. She watches the videos with a confusing mix of open-mindedness and disbelief, and admits that these videos depict real events, but searches for the missing piece, the Arab incitement.

At some point Levy asks, “Why should I believe that?” In other words, if it believes the Israeli army is acting morally, why should it take it seriously?

Alexandrowicz has made more conventional films about the Israeli occupation, and this film offers a step backwards. His decision to make this film in order to reshape the conversation around the viewer and observer of the situation in Palestine becomes the real subject of the film through his graduation. Through voice-over, he explains to the viewer and Levy that the reason he focuses the film entirely on her, despite interviewing other students, is because she is the intended viewer of his previous films.

Levy’s unwavering skepticism is of interest to Alexandrowicz because it offers him a frightening possibility: his films could only preach to the choir. In this sense, “The Viewing Booth” is about the act of being a spectator. The film ends with a follow-up interview in which Levy sees the shot of himself watching the films. The audience is three degrees away from the footage, and the film begins to focus more purposefully on the process and psychology of watching it.

At the beginning of the film, Alexandrowicz stated that these war videos “turn the viewer into a witness”. Perhaps more responsibility is entrenched in the latter term, as the audience is passive while the testimony is implicit. Alexandrowicz examines Levy’s desire to find guilt and blame the Palestinians as an active opposition to this type of implication, but Levy attributes the behavior to bias. She recognizes her filtered perspective, which is shaped by her identity as a Jewish child of the Israelis and confused by fictional depictions of the conflict. In a slightly hypocritical defense, Levy disapproves these videos as possibly truthful as they don’t show the full picture. According to Levy, the videographer’s decisions cannot be trusted, although she doesn’t seem to have a problem with her own selective criticism of the clips.

Levy’s desire for an objective perspective illustrates the underlying challenge for a filmmaker like Alexandrowicz. Objectivity is not possible in documentaries because the videographer always makes decisions. Audiences also have room for choice and bias: how we see, from where and for how long, with or without context and research. All of this affects the way we perceive.

This movie should be a must watch for anyone who writes about watching. The way Levy’s prejudices and Alexandrowicz’s fears interact in conversation provides a primer and warning against the dangerous illusion of objectivity. Our response to images, especially images of war or injustice, cannot go unfiltered. When these images threaten to change a point of view that we associate with a core identity, objectivity is even less achievable.

This should not be a reason to forego journalism and documentary film. This should only encourage journalists to seek and acknowledge their prejudices. For the documentary filmmaker, the inevitability of subjectivity should prompt consideration of what is beyond the scope without neglecting to appreciate what is being shown and why.

Pedro Gonzalez is on a ventilator and is fighting COVID. His Lansing community is behind him.