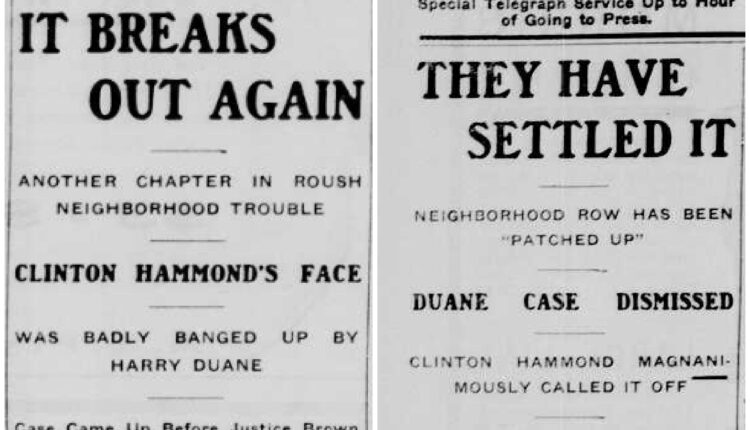 Some things never change. Traverse City recently saw itself the source of a minor viral story as a holiday battle between the Grinch and a reindeer made the rounds via social media, but it wasn’t the first Christmastime fight reported on in the area.

As we dig ourselves out of another once-in-a-lifetime storm event, rather than rehash the many storms that Traverse City has faced over the decades, we’re choosing to look back on a holiday battle that came to a head 120 years ago – a twisting tale involving a cowbell assault, allegations of a potential ax attack, and something called a chiravari*.

Christmas Eve in 1902 was a time of newfound peace between the people of East Bay and East Garfield townships. Under the Evening Record headline “THEY HAVE SETTLED IT,” Clinton Hammond and Harry Duane had solved an ongoing “neighborhood row” that came to a head with fisticuffs regarding the use of a road along Hammond’s property line.

The fight followed nearly a year of local conflict that began in spring at what the Evening Record called a “chiravari”* for a newly married couple. Duane apparently punched a fellow partygoer who happened to be a brother of the bride, following which he “had his nose caved in with a cowbell.”

The end-of-year conflagration that preceded the Christmas Eve peacemaking happened two weeks prior, when Duane went to Hammond’s farm with a few friends “to open up a road along his line, which was laid out about 30 years ago,” per the Evening Record, “but which … had never been legally opened.” This apparently involved tearing down part of Hammond’s fences, which you could say Hammond responded…poorly to.

The fight started with words, after which – according to Duane’s testimony – Hammond “went at his head with both fists at once.” The Record snarkily described this as “not [looking] to a spectator like a very formidable mode of attack.” Apparently Duane’s reputation as a brawler preceded him into the courtroom, as did his size: Duane claimed to be frightened of Hammond and tested that he thought Hammond “might give him a licking, which caused a ripple of merriment among the spectators on the courtroom , especially in view of the size and pugilistic experience of the two men.”

Things stepped up a notch when Irvin Minor took the stand and tested that Duane called for him to “bring the axe, but did not say that he would finish Hammond.” The prosecution argued Hammond acted in self-defense on his own property, the defense “implied that Hammond was looking for trouble, got it, got more than he wanted, and had no redress in law.”

Then Hammond’s butt-kicking ended up on the front page of the paper: “As a result … Hammond came into town this morning with a face that looks as though he had been having an encounter with the business end of a threshing machine,” according to mid-December reporting from the Evening Record.

Although it started with a brawl in a field, proceeded to the issuing of warrants and escalated to a full a jury trial, it all ended with a simple handshake.

“It was a very unexpected termination of the assault and battery case … Dave Roush started the landslide by having a talk with the defendant, and offering to shake hands and call everything quits. Then Clinton Hammond, the complaining witness, offered to shake hands with Duane and call the case off, with the understanding that the troubles in the neighborhood should all be dropped and dropped for good. Duane showed his appreciation of the magnanimity of Mr. Hammond by thanking him and shaking his hand heartily.”

The Christmas Eve edition of the Evening Record reported that “it seemed to be the general sentiment that all old scores were to be wiped off and forgotten.”

“If any man breaks his word of honor in this regard,” stated the paper, “let him be anathema.” And to all a good night.

* What was a chiravari? As the Traverse City Record-Eagle explained a half-century later in 1952, the word had transmogrified into “shivaree,” defined as “an ancient and more or less dishonorable ceremony” following a wedding that involved neighbors getting noisemakers like tin cans, cowbells , old saws and the occasional shotgun together. They then made noise until the newly married couple invited them in for a meal or a drink. This often happened by surprise. At night. Sometimes also involving a brass band.

US-127 closed in both directions between Lansing, Mason after crashes