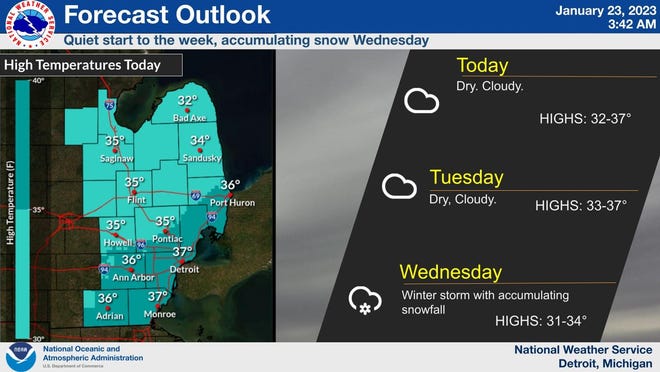 5-8 inches of snow could be headed to Metro Detroit

A winter storm could bring 5-8 inches of snow and cold temperatures Wednesday to Metro Detroit, according to the National Weather Service.

The weather service has issued a winter storm watch for Wayne, Lenawee and Monroe counties from 7 am through 10 pm Wednesday.

A low-pressure system on Wednesday will track through Ohio into Michigan south of Interstate 69 and there’s a 60% to 70% chance of southeast Michigan getting snow. Temperatures, meanwhile, will be in the low 30s Wednesday.

“The bulk of the snow comes Wednesday afternoon, evening … most of it is pulling away from the (Detroit) area by Thursday morning,” he said.

Winds are predicted to travel north at 20 to 30 miles per hour, which may make traveling hazardous with blowing and drifting snow reducing visibility.

“The onset of snow appears as if it will come mainly after the morning commute, so the biggest travel impacts will occur as conditions deteriorate steadily from late morning into the evening commute,” the weather service said in the storm watch.

Tuesday is expected to be cold and cloudy with temperatures ranging from 32-37 degrees. The average high for Jan. 24 is 32, weather service records show.

Snow totals so far for January have been significantly below average in Metro Detroit, according to the weather service. Metro Detroit typically receives around 7.4 inches of snow between Jan. 1-17 but had only received .2 inches as of early last week.

Snowfall last weekend pushed totals so far this month to 3.6 inches at Detroit Metro Airport, according to the NWS. That is about 6.7 inches below normal.

It isn’t unusual for the region to be behind on snow totals by mid-January and then catch up later in the season, said Ian Lee, another meteorologist with the National Weather Service.

“As we get into later January through February, we’ll catch up and get back to normal and even get above normal in terms of snowfall. It all depends on the weather pattern,” said Lee.