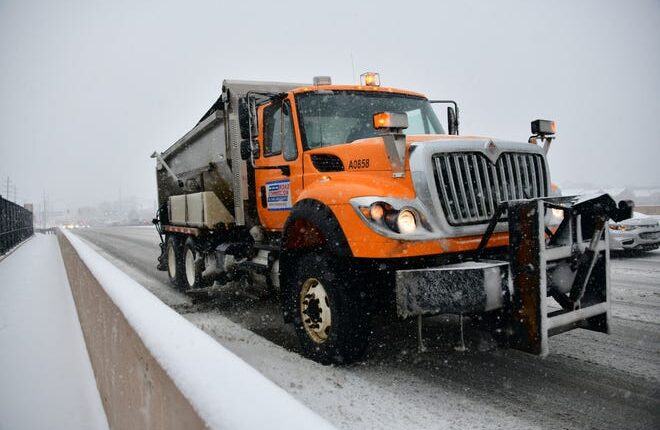 A “potentially dangerous” winter storm set to hit Michigan on Thursday and Friday might unleash blizzard-like conditions across much of the Lower Peninsula, with fierce wind gusts that cause power outages and disrupt holiday travel in the skies and on the roadways, the National Weather Service warned Tuesday.

The National Weather Service’s Grand Rapids office issued a winter storm watch that said parts of west, central, south-central and southwest Michigan could see 8-17 inches of snow through Friday, along with wind gusts of up to 55 miles per hour that will cause snow to blow and drift across roadways.

“Travel could be very difficult to impossible,” said the weather service’s Grand Rapids office, describing the storm as a “potentially dangerous situation.”

The anticipated winter storm could qualify as a so-called bomb cyclone in some parts of the country because of its intensity. The snowstorm is expected to begin Thursday afternoon across most of the Lower Peninsula, with the heaviest snowfall occurring late Thursday night and into Friday, according to the weather service.

“Especially Friday and then into the weekend there’s going to be significant travel impacts across all of southeast Michigan, and travel Friday may be impossible at times,” said Ian Lee, a meteorologist with the National Weather Service’s office in White Lake Township. “Even into Saturday, we’re going to see the potential for lake effect snow and snow squalls as the system starts to exit to the northeast, so conditions may not necessarily be improving that much. There’s going to continue to be hazardous driving conditions well into the weekend.”

It’s part of a larger weather system that brought frigid temperatures, howling winds and blizzard conditions to the Pacific Northwest on Tuesday and which was expected to grip the northern Rockies and then the Plains before blanketing the Midwest with heavy snowfall, according to forecasters. By Friday, the arctic front could spread frigid cold as far south as Florida, and even push Texas to prepare for the worst.

The forecast had airlines bracing for snarled holiday travel during what’s traditionally the busiest days of the year for airports.

On Tuesday, Southwest Airlines began offering waivers to travelers for flights departing and arriving in the Detroit, Grand Rapids and Chicago airports through Dec. 26. Spirit Airlines also said it would offer change-of-flight waivers for travelers scheduled to fly into or out of Detroit Metro Thursday through Saturday.

American Airlines said Tuesday it will waive fees to change flights for passengers scheduled to fly Wednesday, Thursday and Friday to or from the airports in Grand Rapids, Kalamazoo and Traverse City.

Delta Airlines on Tuesday issued a travel advisory saying the storm could impact travel to and from Detroit Metro Airport, Gerald R. Ford International Airport and Chicago’s airports. The airline was offering to waive rebooking fees for arriving flights or departing from Grand Rapids.

Additional snowfall along US-131 from Kalamazoo through Grand Rapids and northward to Big Rapids could total 2 feet by Saturday, the National Weather Service said.

In southeast Michigan, road commissions and utility providers on Tuesday were gearing up for the first major snowstorm of the season as millions are likely to hit the road and sky for holiday travel ahead of the Christmas holiday on Sunday.

Officials with DTE Energy, which has 2.3 million electric customers in southeast Michigan and the Thumb, said its Emergency Response Team has been “closely monitoring” the threat of severe weather and DTE teams “are ready to mobilize for customer restoration as needed,” said spokeswoman Colleen Russo.

“We understand that the coming weekend is not only a holiday but is also expected to be frigid,” Russo said. “Should there be customer outages, we will do everything in our power to restore service as efficiently and safely as possible.”

The late-week storm with high winds could potentially down power lines.

Russo said downed power lines might be hidden by debris so she urged caution for those who head outside. DTE encourages people to stay at least one bus length, or 20 feet, away from downed power lines and “don’t touch anything they may be in contact with — always consider them live and dangerous. “

The storm is expected to start in southeast Michigan with rain late Thursday afternoon, transitioning to snow by the evening. That snow is expected to continue to fall all day Friday, which will be the brunt of the storm, Lee said.

With the potential for snow accumulation Friday exceeding four inches and wind gusts exceeding 45 miles an hour, there is a possibility of white-out conditions on the roads with zero visibility.

Wind chill could get to 15 below zero, Lee said, but meteorologists are continuing to monitor conditions and residents are encouraged to continue to check reports in the next day, as meteorologists should know more about what to expect.

In Macomb County, Leo Ciavatta, supervisor of the county’s department of roads maintenance, said his department is anticipating a full day of snow Friday of upward of four inches, but the possibility of extreme winds poses issues to keeping the roads clear for travelers. AAA estimates more than 3 million Michiganians will hit the roads this weekend for holiday travel.

“My real concern is that when you have a guy clearing the road, and now he clears it and the wind blows up back on the road, there’s going to be this constant struggle to keep the road clear of snow and ice,” Ciavetta said .

Trucks will likely be dispensing salt and plowing roads throughout the weekend.

“Our guys are going to be (out) around the clock,” Ciavetta said. “We’re out there 24/7, so we can be out there during rush hour. We’re out there at three in the morning when the roads are clear, but it’s the weather conditions that make us worry the most.”

The Road Commission for Oakland County, meanwhile, said the impending storm will be its first major storm of the season. It’s the lighter snowstorms that are often more challenging than they require round-the-clock salting. Spokesman Craig Bryson, who said they’ve already gone through 5,000 tons of salt this year, said the commission has 147 salt trucks, though no more than 109 are out at a given time.

“During major storms, we also deploy our 18 heavy-duty pickup trucks to clear the turn arounds on the boulevards as well as to try to start to get into subdivisions as soon as possible,” Bryson wrote in an email. “In snows of more than six inches, we’ll also deploy our 19 road graders (the vehicles that grade gravel roads in the summer) to clear snow on the gravel roads. Finally, we also have several private contractors under contract and on call . During major storms we call them in to help out on the back roads and sometimes the subdivision streets as well.”

Lions’ Anzalone running through past adversity on way to career season