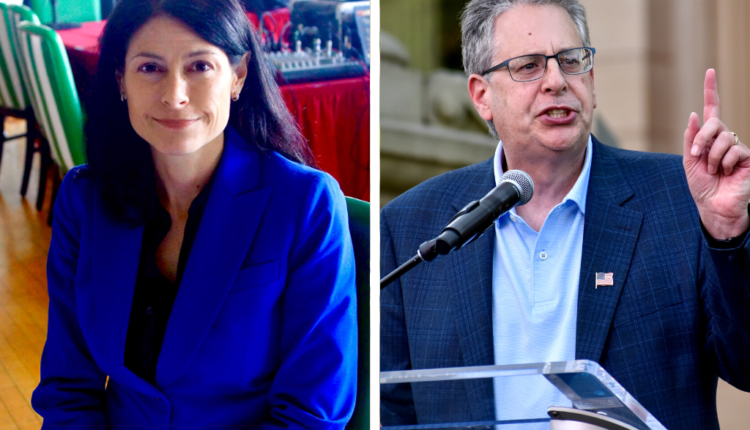 Where Nessel and DePerno stand on abortion rights ⋆

Because of that, it’s likely that the right to abortion care could be litigated vastly differently based on who wins on Nov. 8. The attorney general is a state’s chief law enforcement officer who litigates on behalf of Michigan.

Reproductive rights has been a key issue in the Michigan election since the U.S. Supreme Court overturned Roe v. Wade in June, leaving states to decide how to proceed in the landmark ruling’s absence.

Michigan has one of the nation’s most restrictive “trigger laws” that went into effect immediately after the court’s action. But the 91-year-old law — which makes almost all abortions a felony punishable to up to four years in prison — is currently on pause as court battles involving Nessel and Democratic Gov. Gretchen Whitmer play out.

Nessel opposes the 1931 law, whereas DePerno has vowed to enforce it.

This election will also have a statewide ballot question on abortion rights, Proposal 3. Michigan voters will decide whether or not to enshrine the right to abortion in the state Constitution.

Protesters at the Supreme Court in March 2020, when the justices were hearing arguments in June Medical Services LLC v. Russo | Robin Bravender

Nessel supports the right to reproductive health care, including abortion and birth control.

Nessel also has pledged to never enforce Michigan’s 1931 abortion ban and has spoken out against the effects it would have on women and medical practitioners. Planned Parenthood filed suit in April arguing that the attorney general cannot enforce the law, arguing that it was necessary to obtain a ruling that would bind future AGs.

“I vow then, as I do now, to never utilize this outdated, dangerous, cruel law to prosecute women and their doctors,” Nessel said in April. “ … “I will not enforce it, and neither will I defend it.”

Nessel has also had her own personal experience with abortion. She said that she and her twin sons, now 19, are alive today because she made the choice in 2002 to terminate a third fetus.

The Democrat predicted in 2019 that Roe would be overturned or “substantially gutted” — and that “many women will die” if the 1931 law comes back into effect. She has made statements since then demonstrating concern that, with the toppling of Roe, contraception access could be next.

The right to birth control was established in Griswold v. Connecticut in 1965 when the U.S. Supreme Court ruled that a state’s contraceptive ban violated the right to marital privacy.

Nessel is in favor of birth control access, has rallied in support of reproductive freedom and encouraged voters to vote for Proposal 3.

Nessel has expressed concern about what a Republican successor could do to criminalize women and doctors.

“I think it’s terrifying in my mind that, after 50 years of women having the ability and the fundamental right to be able to make decisions about their healthcare with their doctor, to know that an individual holding this particular office could and possibly will start to subpoena OB-GYNs and other physicians all around the state to find out what kind of procedures they are performing,” Nessel said last December. Like Nessel, DePerno has spoken frequently on abortion and reproductive health issues.

The Republican supports Michigan’s 1931 abortion ban, which does not have exceptions for rape, incest or the mother’s health. He is endorsed by Right to Life of Michigan, a group that only endorses candidates who believe in banning abortion in all circumstances except to protect the life of the mother.

The group has also endorsed Republicans Tudor Dixon and Kristina Karamo who are seeking to oust Whitmer as governor and Jocelyn Benson as secretary of state.

“We will enforce the 1931 law unless it’s modified or changed by the state Legislature when I’m elected,” DePerno said in June.

It is unclear what DePerno could or would do in case Proposal 3 passes and abortion rights are codified. Unlike Dixon, DePerno has not pledged to accept the outcome of that vote if it passes.

In February, he said at an attorney general debate that the U.S. Supreme Court’s ruling in Griswold and its 1973 Roe decision were state’s rights decisions that were wrongly decided.

DePerno has since made statements in opposition to contraceptive pills. At a Texas event in August, he initially didn’t appear to know what the Plan B emergency contraceptive was when asked about his position. Commonly known as the morning after pill, Plan B can prevent a pregnancy if taken within five days within intercourse. It is not a medication that can terminate a pregnancy.

After learning what Plan B was, DePerno then said he would “ban the pill from the state.”

“You have to stop it at the border. It would be no different than fentanyl. The state has to ban it, and it should be banned,” DePerno said at the Conservative Political Action Conference (CPAC).

Fentanyl is a deadly narcotic that was responsible for more than two-thirds of national overdose deaths in 2021. Plan B, on the other hand, is a safe hormone that helps prevent pregnancy by preventing or delaying ovulation. It does not cause abortion or miscarriage.

Nessel tweeted in response that DePerno “has been crystal clear about how little respect he has for women’s autonomy.”

DePerno seemed to back away from his claims about contraceptives during an interview in September with the Detroit Free Press’ editorial board. He has remained steadfast in his opposition to Prop 3 and abortion rights.