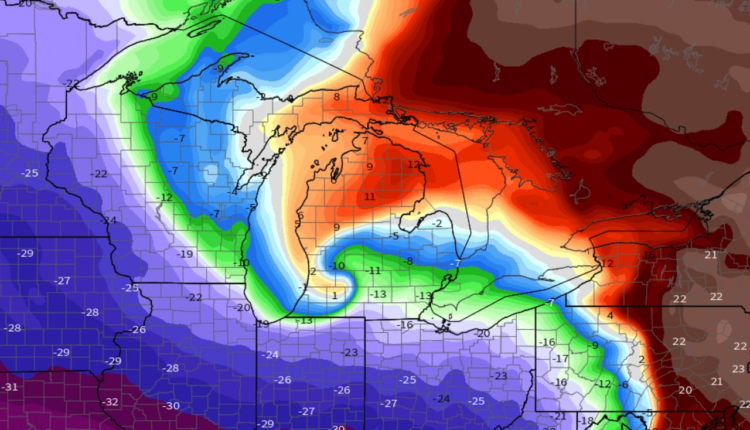 A strong storm system will have the center of it track right over Lower Michigan. The swirling circulation around the storm will do some strange things to our temperatures across Lower Michigan.

A storm system always has the same direction of rotation- counterclockwise. Imagine a top spinning counterclockwise. That’s essentially what this storm will be doing. You’ve seen the animations of a hurricane rotating as it heads across the ocean. A middle America storm does the same thing, only not churning as fast and not as visual without the classic hurricane eye.

As the storm center tracks into southwest Lower Michigan, warm air will actually be pulled northward and back to the west. This path of warmer air will mean the above-freezing temperatures warm enough for rain will move into northeast Lower and then move back west toward Traverse City and northwest Lower.

At the same time bitterly cold Arctic air will move from Canada and the northern Plains and wrap around the west and south side of the storm center.

You’ll see no better visual ever on this process than the surface temperature forecast for Friday.

Here are what the temperatures should be around 7 am Friday.

Temperature forecast at 7 am Friday shows Ohio and Indiana in the arctic air while Lower Michigan has a tongue of warmer air wrapping up into north of the storm center.

You can definitely envision where the storm center is forecast to be located Friday morning. Fort Wayne, Indiana will be near zero degrees while Kalamazoo will be 17 degrees and Grand Rapids 32 degrees. Mackinaw City could be a few degrees warmer than Grand Rapids.

Here is a great forecast animation showing the curling of the temperatures as the storm crosses Lower Michigan Friday into Saturday.

While the look of the temperatures is neat, the more important weather result will be mixed precipitation that will be just plain rain at times. In the places where it’s warm enough for rain, the snow totals will be cut in half. Half of the storm’s precipitation will fall as rain.

Tomorrow will be a day when we can likely start giving you the first glance at how much snow will fall where. Heavy snow won’t be the full story of this storm. A dangerous flash-freeze is still set to occur Friday morning across southern Lower and into the Thumb and Saginaw Valley area. I will have a timing on that flash freeze here in a post I’ll do Tuesday.

The wind, blowing and drifting snow and eventually very cold temperatures will also be part of the story of this storm.

But the temperature pattern will be weird to you. Now you know why.

What a Democratic majority in Lansing could mean for Detroit