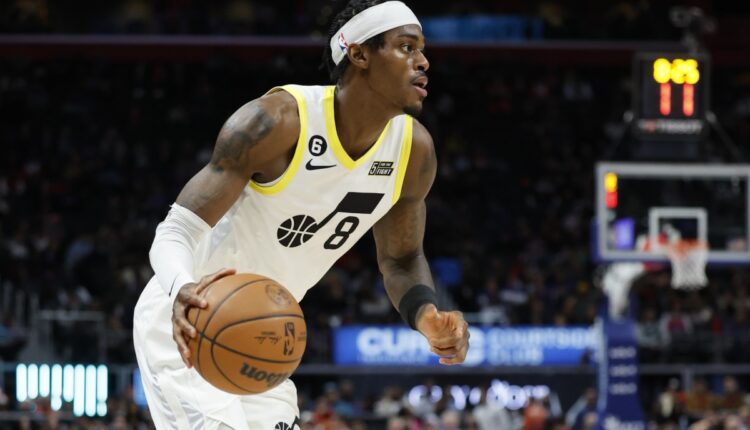 The Utah Jazz wasted no time establishing dominance against the Detroit Pistons in the ‘Motor City,’ while moving the All-Star needle.

December 20 was the opening day for NBA All-Star fan voting, and Lauri Markkanen bolstered his case by tying a career-high 38 points and setting a new career-high with nine made three-point shots. He also grabbed five rebounds, one assist, and one steal while shooting a blistering 65% from the field and recorded a whopping +20 game rating.

Marrkkanen received an abundance of assistance from other Jazzmen, as the Pistons were never a threat to win the entire night. The Jazz recorded five double-digit scorers, posted + game ratings for all of their starters, and received a near triple-double from Jarred Vanderbilt. Utah needed this type of performance after the debacle in Cleveland.

The Pistons were rewarded with a career night from their rookie sensation Jaden Ivey, who scored 30 points with five assists, four boards, and one steal. He shot an off-the-charts 71.4% from the field and made both of his three-point attempts, but only managed a -10 game rating.

If it weren’t for the play of this young stud, the Pistons would have lost by a much wider margin. The Pistons recorded five double-digit scorers but were no match for the 801 Jazzmen.

Who were the game’s biggest winners and losers? Let’s dive in.

Markkanen was on the money from the get-go and maintained his steady play throughout the contest. Prior to the NBA season, I wrote several articles projecting him as the NBA’s Most Improved Player and as an early surprise for the NBA All-Star game.

I received some criticism, but those doubters can now agree that both accolades are well within reach for Markkanen. Sometimes a player makes the game look easy, which is precisely what he did to the Pistons.

In addition to the stats listed above, the Pistons could not offer any resistance to stymy Markkanen’s rhythm. And now that All-Star voting is available, some Piston fans will throw a few votes his way.

The Pistons are officially the worst team in the NBA, with a record of 8-25. When teams find themselves in this position, one must wonder whether it’s the players or the coach.

The Pistons need a new coach who can relate to today’s NBA athletes. If you analyze the Pistons roster, Casey needs to insert the correct five to start an NBA game.

Killian Hayes and Isaiah Stewart are not NBA starters and, with this roster, should be replaced by Saddiq Bey and Marvin Bagley III. Then when Cade Cunningham returns, you send Bagley III to the bench, which is basketball 101, and I wonder why it took so long to insert rookie Jalen Duran into the starting line-up.

It’s time for the Pistons to say goodbye to his current coach Casey.

Vanderbilt posted the following stat line: 18 points, 13 boards, six assists, two steals, and a +17 game rating. Workman-like, he messed around and got a triple-double and did not commit some of the senseless fouls the 801 has become accustomed to.

Vanderbilt can significantly impact the game in multiple categories as long as he plays with poise.

‘Boggy’ was visibly frustrated most of the night and not due to play. He’s flustered because he was recently traded. And not just traded but traded to the worst team in the NBA.

Kelly Olynyk was the focal point of the trade with Bogdanovic, and he did not even suit up against the Pistons. Although Olynyk has provided some excellent moments for the Jazz, the final verdict may reveal that this could have been a better trade for the Jazz.

Now that rookie Walker Kessler is the starting center for the Jazz, can you imagine how much more lethal the Jazz would be if Boggy were on the roster? It makes you wonder, but for now, Bogdanovic is a loser, not due to his play.

The Jazz will face the Washington Wizards at home on Thursday night and are ranked No. 8 in the Western Conference.