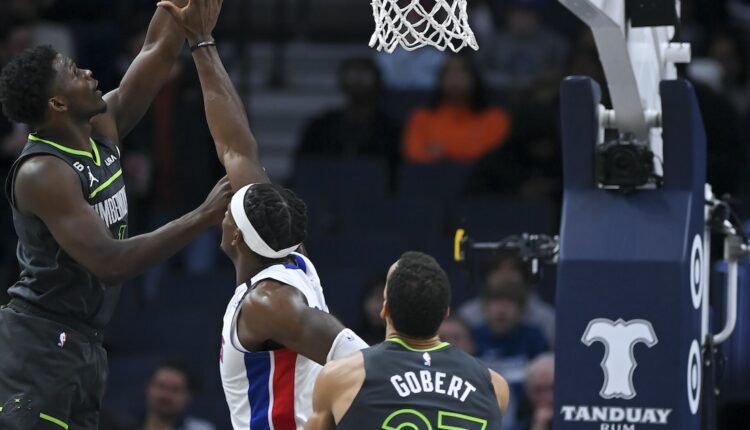 At the top of the new year, the Timberwolves either hit rock bottom, or are screaming toward it in a terminal velocity after a 116-104 loss to the Pistons.

It marked the sixth consecutive loss in a game the slumping, staggering Wolves should have won against a rebuilding Detroit team.

The autopsy showed most of the same results as many losses this season — poor rebounding and transition defense. Detroit had 24 fast-break points and 22 second-chance points. There was one sequence in the fourth quarter Detroit grabbed three offensive rebounds, which prompted booing from the Target Center crowd in the middle of a possession.

“Old demons,” coach Chris Finch said. “Got outcompeted in the third. Just lifeless and not sure exactly where it comes from.”

The Pistons erased all of an 18-point deficit by the end of the third quarter by outsourcing the Wolves 38-24 and stormed ahead thanks to an 11-0 run in the fourth.

The Wolves just ended an 0-4 road trip that featured tough matchups against high-caliber teams while the Wolves had players coming in and out of the lineup due to injury or illness.

They had plenty of hands on deck Saturday. Kyle Anderson (back spasms), Anthony Edwards (hip) and Rudy Gobert (illness) all came in as game-time decisions and all played. It didn’t matter, especially as it pertained to the Wolves’ rebounding issues.

“We just got to box out,” Finch said. “I just don’t know. It’s the same thing all season long. Tired of saying it.”

The Wolves went on cruise control after jumping out to a 30-12 first-quarter lead and were never able to engage fully again in this game.

Edwards had 30 points while D’Angelo Russell had 25, but no other Wolves player scored more than 12. Finch suggested he might have to shake up his rotations.

“We just need more competitiveness a lot of places right now,” he said. “I got to find some people who want to go out there and try to rebound. I really do.”

After the game, Finch took longer than usual to come out for his postgame news conference. Then the team’s locker room stayed closed for longer than usual. Usually that’s a sign the players are having a players-only meeting among themselves. Finch mentioned he noticed more frustration than usual creeping into his team.

“Tonight was the first time I saw them frustrated with each other through a lot of different ins and outs of the lineup, tough losses on the road,” Finch said. “But tonight I think it manifested itself in a different way. A lot of frustration with guys not making the right and simple play.”

When the locker room opened, Edwards and Russell left before the media could ask them questions.

Reid talked about the team needing to “buy in” to things such as rebounding, transition defense and being coachable.

Anderson declined to go into specifics about the postgame chat, but said as a team, the Wolves had to ramp up their readiness on a nightly basis.

Gobert (nine points) took only three shots as he battled foul trouble and his own teammates’ inability or unwillingness to get him the ball near the basket. He emphasized the need for the Wolves to keep up their “spirit.” That’s hard to do after a night like Saturday.

“We’ve got two options,” he said. “We can sit back and feel sorry for ourselves or we can just look ahead and understand that it’s still a long season and we’ve got a lot of time left.”

Ads Close Out 2022 With Win In Grand Rapids