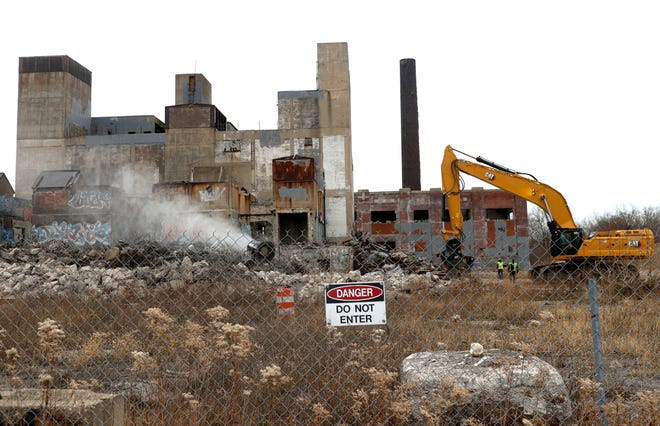 The new owner of what remains of the old Continental Motors Co. planted on Detroit’s east side confirmed Friday that his firm is demolishing all of the industrial ruins, including its prominent smokestack, and plans to replace it with a self-storage building.

Anthony Scavo, chief operating officer for Miami-based Basis Industrial, formerly known as MCSS Self-Storage, said in a phone interview that all the factory structures still standing at 1610 Algonquin St. will be razed, with completion of the demo expected by late February or early March.

“We are taking everything down to the dirt on the whole site. It’s going to be a complete demolition,” he said.

The demolition started earlier this month. The firm at one point considered keeping the brick smokestack in the old powerhouse that has “Continental” in vertical white lettering, he said.

But the smokestack was “in too bad of shape,” he said, and preserving it would have crowded out needed infrastructure space for the future self-storage building, such as a retention pond and underground utilities.

“There was just no room on the site without taking the entire building down,” Scavo said.

The self-storage building would be 78,000 square feet with 641 units, averaging 100 square feet in size, he said. The firm has yet to file development plans with the city, but expects to in coming weeks.

It will be their first project in Michigan.

“We have developments similar to the one in Detroit in about 12 states,” Scavo said. “We go anywhere we can, as long as the taxes aren’t that crazy and you can actually build (the) storage. For instance, Illinois, you don’t go near that, because the (taxes) are too much. In Detroit, the taxes were reasonable and we could fit in a building and we felt like the site was well priced.

“We have a very in-depth due diligence process where we seek out sites. We run metrics on population density and where there is no self-storage buildings. And this one is actually close enough to the surrounding areas of Grosse Pointe that we felt there was a big enough hole in the market to put a self-storage.”

The project will not seek any city tax breaks or brownfield development incentives, Scavo said. He did note how the site is within a federal Opportunity Zone, a designation that can provide capital gains tax breaks to investors who put money into development projects.

He said he hopes construction can start once the demolition is done.

“We want to get this building finished as quick as we can. With the rise in construction costs and everything that’s going on, we had to do some redesign.”

The once-sprawling Continental Motors plan was designed by architect Albert Kahn and opened in 1912. It originally made car engines, later producing tank and aircraft engines during World War II, and briefly auto engines again after the war, according to the Historic Detroit website .

Most of the plant was razed decades ago and only a few remnants stood still. The last significant business to operate there was a scrap aluminum recycling operation, Continental Aluminum, which reportedly left in the late 1990s.