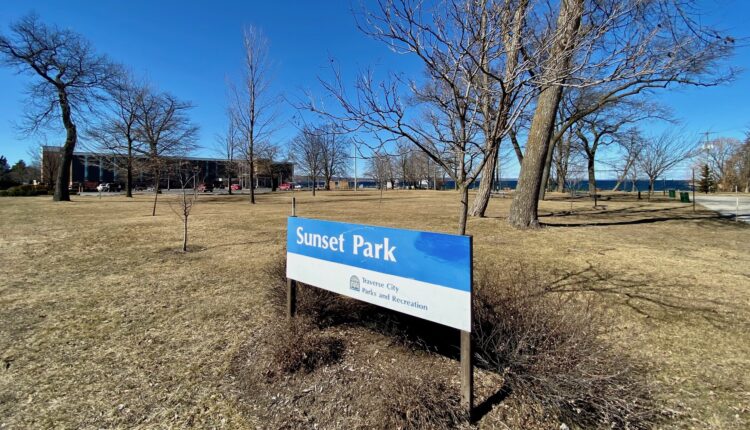 Traverse City officials will speak again tonight (Monday) at 7:00 p.m. at their virtual meeting on cleaning costs for PFAS spills on the easing rules for pets in city parks – including the possible designation of Sunset Park as an off-leash dog beach. Also on the agenda of the busy meeting are several liquor license applications and two closed sessions discussing pending lawsuits against the city over recreational marijuana permits and FishPass construction.

Pets in parks
City commissioners will consider a recommendation from the Parks and Recreation Board to make several changes to city rules to make city parks more animal-friendly.

At the top of the list is the proposal to build the city’s first designated dog beach in Sunset Park next to Hagerty Center on West Grand Traverse Bay. The city’s current ordinance bans dogs on manicured beach areas, which essentially make up all beach parks. The discussion on parks and recreation centered on a “carrots instead of whips” approach, balancing stricter enforcement on other beaches with the provision of a special space in the city for dog owners. The Board recommends leashed dogs on Sunset Park Beach “so that dogs and their owners can swim together in the water with no leash restriction,” said Derek Melville, superintendent for parks and recreation.

“The off-leash area would be limited to the beach area and not the entire park,” Melville wrote in a memo to city commissioners. “If the area is supported as off-leash space, plantings could be used in addition to current logs to demarcate the beach area and control access points.”

Other recommended changes are the lifting of the general ban on dogs in the Open Space during the National Cherry Festival. Parks and Recreation members instead suggest that festival organizers only ban dogs in certain areas such as concert areas and enclosed spaces (service animals are exempt from bans). “This change would allow people who walk their dog along the TART trail to get through easily and gain access to areas and events that are dog-friendly,” says Melville.

Finally, according to Melville, the board members recommend removing the regulation language that “encourages leaving dogs or other animals in a car while the owner is at the farmer’s market.” The Board also proposed changing the word “pet” to “domesticated animal” in regulatory language to provide a limited scope for what types of animals are covered by the rules.

Airport cleaning
The city appears to be hooked on cleaning costs related to two accidental releases of fire-fighting foam containing per- and polyfluoroalkyl (PFAS) substances during the training incidents at Cherry Capital Airport, according to a statement from prosecutor Lauren Trible-Laucht. However, the airport’s unwillingness to contribute to the costs, which several city commissioners believe should be a shared responsibility between the city and the airport, could lead the commissioners to renegotiate or terminate the city’s fire-fighting service contract for the airport .

Two accidents in November and December with the same airport crash fire truck resulted in PFAS-laced foam being dumped onto the airport premises, incurring cleaning costs of over $ 40,000. PFAS are a group of dangerous but widely used chemicals in fire-fighting foam and other industrial applications that have been linked to adverse human health effects. The first accident, according to Jim Tuller, chief of the Traverse City Fire Department, was a firefighter’s training error. However, the second incident was attributed to a mechanical failure of the airport truck due to improper maintenance. At their meeting on March 1, the city commissioners asked Trible-Laucht to analyze the airport contract in order to determine whether the airport could bear any cost responsibility. TCFD only uses PFAS foam – a risk to its own firefighters – as federal regulations mandate its use at airports. These requirements are due to be lifted by the Federal Aviation Administration (FAA) in October.

Trible-Laucht reviewed the airport contract and found that the city was responsible for the redevelopment costs according to the contract language. City Manager Marty Colburn said he asked the airport to contribute anyway, but management declined. “I spoke thoroughly with airport director Kevin Klein about the incident and asked the airport to pay up to 50 percent of the costs,” Colburn wrote to the commissioners. “Mr. Klein stated that he was unwilling to pay the cost, believing it was the responsibility of the city as the contractor of the agreement.” The commissioners previously indicated that they were about to renegotiate or terminate the contract Would be interested if the city were left on the hook for the costs Commissioner Tim Werner said it was “outrageous” for the city to assume 100 percent of the liability for training exercises requested by the airport.

Also at the Monday meeting …
> City commissioners will consider approving updated liquor license applications for The Workshop Brewing Company and Burritt’s Fresh Markets in order to properly register existing local businesses with the city in addition to registering with the Michigan Liquor Control Commission (MLCC). Commissioners will also consider a new license application for a proposed restaurant and brewery on West Front Street called the Loco Boys Brewing Company.

> Commissioners will consider going into a closed session to discuss two separate pending lawsuits against the city, including litigation over how the city will issue recreational marijuana permits – with existing medical marijuana companies battling to get first priority – and the efforts of Citizen Rick Buckhalter to stop building FishPass on Union Street Dam. There is currently an injunction prohibiting the construction of FishPass from beginning until a scheduled May trial for Buckhalter’s suit takes place.

> Commissioners will hear presentations on the Michigan Independent Citizens Redistricting Commission and 2020 highlights from the city’s engineering department. will consider approving an order to plant 175 new trees in town; will consider building a temporary outdoor gathering tent at the senior center this summer; and is considering finalizing the purchase of the town’s property at 1383 Cass Road from the Grand Traverse Land Bank Authority.

Cold day with snow and sleet on the way