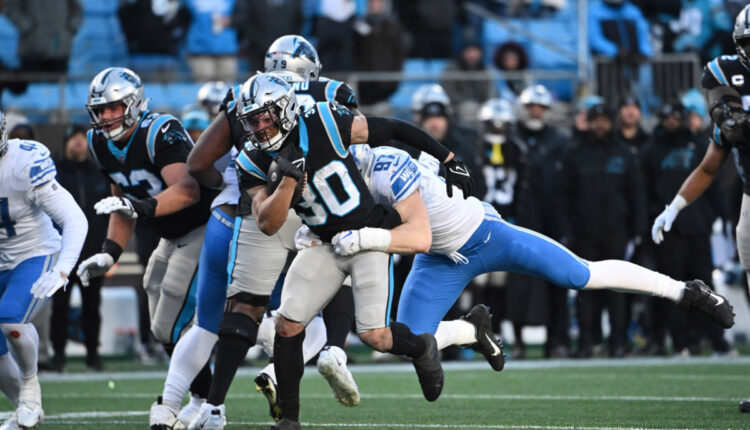 The NFLPA is now taking action for the playing surface at Bank of America Stadium not being up to standards in Week 16.

According to a report from ESPN Sunday afternoon, the Players Union will file a formal grievance with the League due to the conditions in Carolina for the Lions-Panthers contest last week.

“The NFLPA complained before the game and said the field conditions in the extreme cold, only worsened as the game progressed,” NFL reporter Adam Schefter reported.

Prior to the game, Detroit’s young roster took to the field and immediately noticed the field conditions were quite abnormal.

Many openly questioned the suitability of the playing surface following the loss to the Panthers.

“Yeah, that field was tough,” Ragnow said, via MLive. “I don’t want to make excuses, but it was pretty hard, man. It’s tough to brace with the toe and everything. It was tough.”

Reportedly, Aidan Hutchinson fell on his face in warmups.

While the issues with tackling were caused by a multitude of reasons, the playing surface was surely among them.

“That was the most concrete field I’ve ever been on in my whole life,” Hutchinson said. “I didn’t think that was actually legal to play on. Warming up, you’re trying to turn the corner, and literally in warmups, I fell in my first one-on-one rep right on my face.

“I don’t know if there is a standard you have to meet for turf, but I think it got better later in the game, so it wasn’t too much of a factor. But, I mean, it was very concrete-like for sure.”

Michigan Gov. Gretchen Whitmer to be sworn in for second term in office at Lansing