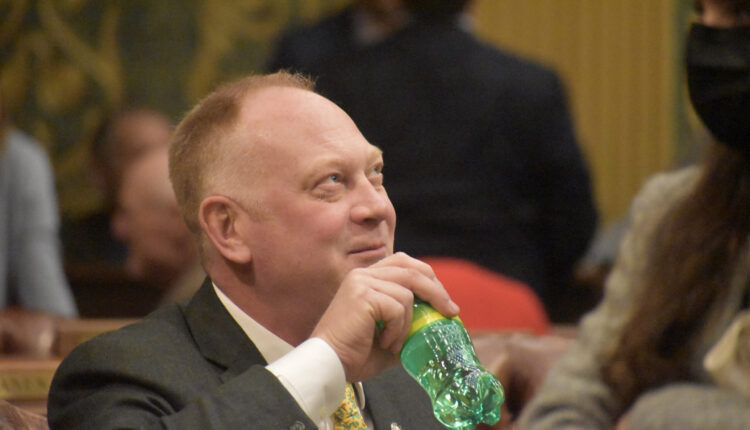 Several Republican legislators are protesting their committee assignments in the Michigan House as they continue to adjust to the fact that the GOP is now in the minority.

Three of those House members initially denied initial committee assignments have helped, in varying degrees, to perpetuate the false claim that the 2020 election was stolen: State Reps. Angela Rigas (R-Hastings), Mike Hoadley (R-Au Gres) and Matt Maddock (R-Milford). However, all three were later added to the House Committee on Housing, which Rigas complained was “an obscure housing subcommittee with no clear direction.”

Rigas attended the insurrection at the U.S. Capitol where pro-Trump protesters sought to stop Congress’ certification of President Joe Biden’s win. Rigas claims she had a weapon and was tear-gassed within the Capitol grounds. She has said she considers being called an “insurrectionist” and “terrorist” a “compliment.”

A Stop The Steal is posted inside of the Capitol Building after a pro-Trump mob broke into the U.S. Capitol on Jan. 6, 2021. A pro-Trump mob stormed the Capitol, breaking windows in the deadly insurrection attempt aimed at stopping Congress from certifying Joe Biden’s win in the November election. | Jon Cherry | Getty Images

Maddock was one of 11 Republican House members to put their names to briefs in a failed lawsuit that sought to overturn election results and one of five GOP legislators who attempted to enter the Michigan Capitol on Dec. 14, 2020, with a slate of 16 fake Republican electors — one of whom was his spouse, Michigan GOP Co-Chair Meshawn Maddock. The Maddocks also were in Washington, D.C., for pro-Trump protests over the 2020 election and were at a Jan. 5, 2021, rally.

Rigas called her initial lack of an assignment “an apparent act of retribution” for her vote against Rep. Joe Tate (D-Detroit) as House speaker.

Tate, who is Black, is the first person of color to serve as House speaker in Michigan.

“Committee is a forum for respectful debate and discussion and some representatives made clear they are most focused on partisan games and division,” Tate spokesperson Amber McCann told the Advance.

Rigas said on Thursday she received word from Tate that she would not be serving on any committees along with two other legislators who voted against the new speaker, Hoadley and Maddock.

Hoadley is a freshman who was endorsed in his House run by Trump because he saw “the greatest crime in American history–the theft of the 2020 presidential election.”

This is not the first time that Maddock has clashed with leadership. Last term when Republicans were in the majority, Maddock was booted from the GOP caucus for allegedly failing to keep discussions private. The Advance first reported after the November election that Maddock had been welcomed back into the smaller Republican caucus for the 2023-24 term.

Committee is a forum for respectful debate and discussion and some representatives made clear they are most focused on partisan games and division.

Maddock took to Facebook to complain about his initial lack of a committee assignment, also explicitly connecting it to his vote against Tate.

“I’ve been kicked out of the caucus in the past, given bad committees, removed as chair of committees, because I try to fight for the things I believe in, the things I campaigned on, and the things that will help everyone in Michigan,” said Maddock. “I have a lot of great colleagues, but its hard to stand strong in Lansing. I don’t think many appreciate how powerful leadership is, how influential the lobby is, how many decisions are made by unelected staffers, and how the dishonest Lansing media operates to police dissenters more than it tries to inform readers. It’s going to be a long two years if this week is any indication.”

“It won’t work,” she said. “I won’t be silenced and won’t back down. I will continue to fiercely advocate for my constituents.”

Despite her contention that her vote against Tate was the rationale for her initial lack of a commitment assignment, the other five GOP legislators who also voted against Tate received committee assignments: State Reps. Steve Carra (R-Three Rivers), James DeSana (R-Carleton), Joseph Fox (R-Tecumseh), Neil Friske (R-Petoskey) and Josh Schriver (R-Oxford).

However, one of them says it wasn’t good enough.

Friske decried his seating on only a single committee, the Families, Children, and Seniors Committee, as “clearly a reprimand for conservative defiance on the vote for Speaker of the House,” adding that he felt “completely disrespected” that his “voice has been actively diminished due to the Democratic-majority.”

Speaker Pro Tempore Laurie Pohutsky (D-Livonia) commented on Twitter: “Local man feels disrespected by the consequences of his own actions.”

Local man feels disrespected by the consequences of his own actions. https://t.co/nerup2gLCs

Friske was involved in a lawsuit against Whitmer over her COVID-19 health restrictions. He is the son of former Rep. Richard Friske, who was a former community organizer for George Wallace’s presidential campaign and was embroiled in a scandal when it was discovered he was a pilot for Nazi Germany during World War II.

State Rep. Andrew Fink (R-Hillsdale), who voted for Tate as speaker, complained that Appropriations subcommittee assignments had yet to be announced this week and took a shot at Democrats as being “disorganized.”

Rep. BeGole hopes past experience will serve him well in Lansing | Local News