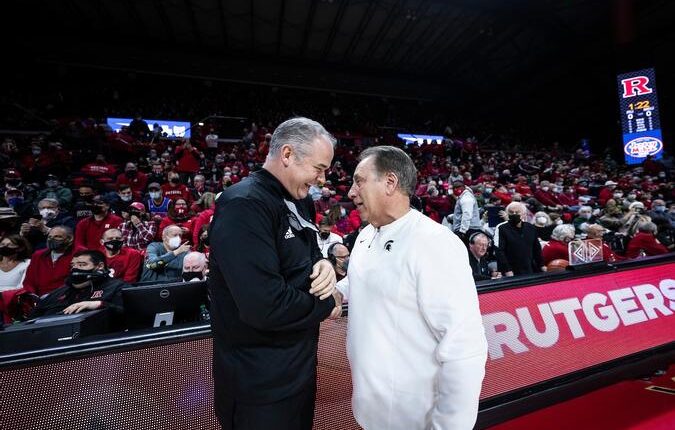 PISCATAWAY, NJ – The Rutgers men’s basketball team will be taking on the Michigan State Spartans at the Breslin Center in East Lansing, Michigan at 6:30 PM on FS1 Thursday night. Rutgers has won seven of it’s last eight games and has entered the AP Poll for this first time this season at the No. 23 spot.

The contest marks the 14th meeting lifetime between Rutgers and Michigan State, with the Scarlet Knights having won the last two games after dropping the first 11 meetings. Last season, at home, RU had their highest margin victory (21 points) over a ranked opponent in school history with a 84-63 win over the No. 13 ranked Spartans, with Paul Mulcahy posting the first double-double of his career with 15 points and 12 assists. That made for consecutive wins of 20+ points over Michigan State after RU demolished the Spartans, 67-37, in a fanless home game in the 2020-21 season. In that game, Rutgers held the Spartans to just 28 percent from the field, with the 37 points against representing the best defensive effort in a Big Ten game for RU.

A victory over Michigan State would represent:

Michigan State would be the ninth different road venue that RU was won at in the Big Ten. RU also has not won at Michigan, Illinois or Ohio State since joining the league.

Over the past two seasons, RU is 5-7 on the road in Big Ten play and has eight Big Ten road wins in the past three seasons. Prior to that, RU won just five Big Ten road games in the first five seasons as a league member.

Rutgers holds a 5-2 record through seven conference games. The team is holding foes to 61.6 points per game and 39.5 percent shooting in league games, top in the conference in both marks. With 179 steals on the year, RU paces the conference.

The Scarlet Knights claimed their first overtime Big Ten win at home since February 9, 2020 with a 68-64 decision over Ohio State. With the win, RU improved to 13-5 overall, having won seven of the previous eight games. RU has started conference play with a 5-2 record for the second straight year. Cliff Omoruyi tied his career-high with six blocks, posting another double-double (14 points, 11 rebounds).

– 7-1 record (wins over Wake Forest, Bucknell, Coppin State, Purdue, Maryland, Northwestern and Ohio State with the lone loss coming to Iowa)
– Scoring margin of +12.9 (72.9 to 60.0)
– Holding opponents to 60 points per game, and under 65 points in seven of the eight games
– Cam Spencer leads the team in that span at 15.6 points per game, posting at least 9 points in all eight games
– Cliff Omoruyi is averaging a double-double in that span, 11.8 PPG (second on team) and team-best 10.8 RPG

Under Naismith Hall of Fame head coach Tom Izzo, MSU enters the contest with a 12-6 record and are 4-3 in Big Ten play, following a two-game losing streak (Illinois and Purdue). Tyson Walker leads the team in scoring after posting 30 points Monday, averaging 14.8 points per game. Joey Hauser paces the team at 7.8 rebounds per game. AJ Hoggard is seventh nationally in assists (6.3 apg). The Spartans are second in the Big Ten in defensive rebounds (28.0).