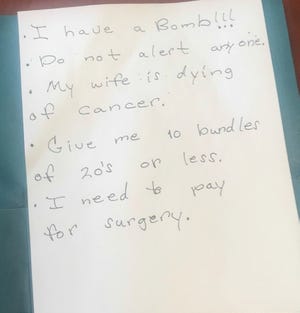 Though the heist was executed easily, the suspect didn’t pull it off in a way most would expect.

Martez Newkirk left a large trail before and after federal officials allege he robbed a Fifth Third bank last summer on Detroit’s west side.

That included the ride-share service the Livonia man hailed to the site and the surveillance footage showing him trying on a head covering in a store nearby, records show. Not to mention the distinctive note he handed to a clerk demanding cash and implying he had a bomb.

“A review of police reports from the Redford Police Department revealed that a similar note pattern, both stylistically and grammatically, was used in the September 2010 robberies by Newkirk to the robbery currently under investigation,” an FBI agent wrote in a criminal complaint filed this month in US District Court.

Those clues eventually led to Newkirk authorities, who has been charged in connection with the July 29 bank robbery and remains in custody pending a preliminary examination scheduled for Jan. 4.

The filing unsealed last month revealed the intricate steps investigators followed to link the 39-year-old to the crime.

The Detroit Police Department and the FBI Violent Crime Task Force were called to the Fifth Third on Telegraph soon after the suspect fled with about $7,000.

Surveillance footage showed the man had first arrived to a Jane’s Beauty Supply on the same block, dropped off by a 2019 Honda CRV with Lyft and Uber emblems in the windshield, around 11:34 am Inside the store, he was filmed buying a black head covering and picking at his fingertips multiple times, according to the affidavit.

“Through affiants training and experience criminals have been known to put superglue or other substances on their fingers in order to hide the ridge detail in their fingerprints,” the FBI agent wrote in the affidavit.

By 11:52, the suspect was in the bank lobby. Within minutes, the building’s cameras showed, he approached the first teller station toting a blue folder then spent some more time “grabbing inside their backpack,” the complaint said. “The subject handed a blue folder to the victim teller. … Inside the folder was an unlined sheet of paper with black writing that stated the following: I have a bomb!!! Do not alert anyone. My wife is dying of cancer . Give me 10 bundles of 20’s or less. I need to pay for surgery.”

Newkirk then retrieved a black cylindrical object with two wires protruding from the top the teller described as having a time clock and a bar code. He placed the device on the counter while collecting the cash the bank workers handed him, federal officials reported.

When leaving, the bank doors briefly locked him in the vestibule. “The subject then held up the device to the camera in a threatening manner,” the FBI said. “Bank employees then released the doors allowing the subject to exit with the currency and the device.”

Newkirk was seen on other cameras in the area as he meandered away from capture. But authorities figured out where he went.

A search warrant led to investigators learning he caught an Uber from his mother’s home in Livonia to the beauty supply store before the robbery, then again to another address in the same city, according to the court filing.

It was the same home his girlfriend listed in a police report, on Aug. 17, when she accused him of assaulting her at a hotel, authorities said. His cell phone number was also listed in the report.

“A review of the location data for Newkirk’s cell phone was matched against the ride share data provided by Uber,” the FBI said. “On the day of the robbery at each location that Newkirk booked a ride by Uber his cell phone was located geographically in the same vicinity.”

Surveillance footage from the hotel where the alleged assault unfolded confirmed Newkirk was the bank robbery suspect. So did more images taken at the Livonia Walmart where he used his Bridge Card, twice wearing the same black sneakers, according to the complaint.

Michigan Department of Corrections officials also informed investigators Newkirk robbed two banks in September 2010 in the same area as the July one using similar means, including bearing a note about a bomb and displaying a device with a timer in one of the instances, the FBI agent wrote.

“Newkirk did not receive any money from the teller and exited the bank and got into a checkered cab,” the complaint said. “Newkirk was charged with (two) Counts of Bank Robbery and Explosives with Intent to Frighten. He pleaded guilty to the two counts of bank robbery and served approximately one year in prison.”

After Newkirk was arrested and made his first appearance in court last week, Magistrate Judge David Grand cited that history, as well as two personal protection orders sought by partners who accused him of assault, in a detention order.

“The evidence of Newkirk’s dangerousness and his history and characteristics are intertwined,” Grand wrote.

David Tholen, the federal defender appointed to represent Newkirk, did not respond to a request for comment Tuesday on the case.